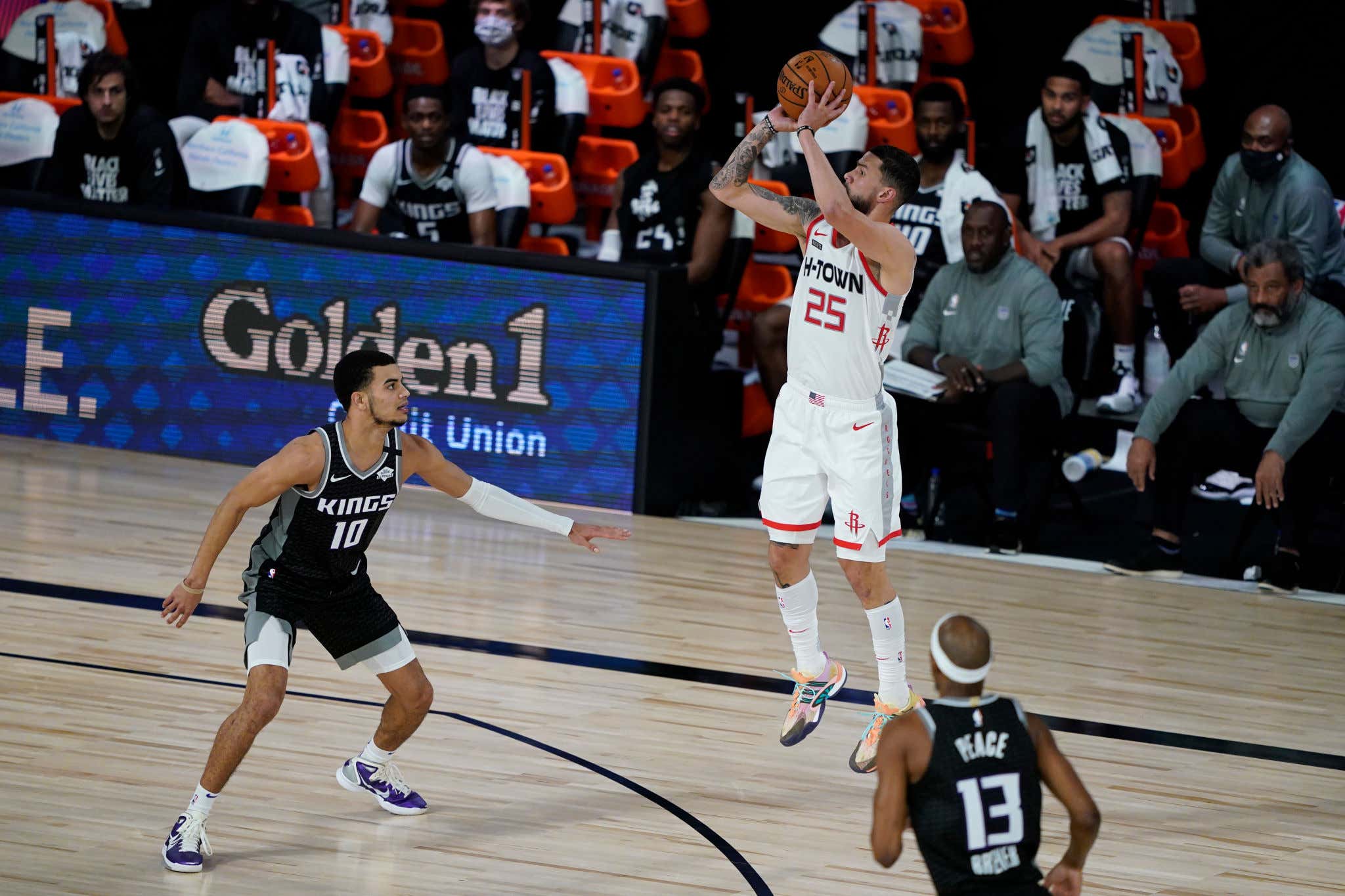 Good morning everybody happy Monday and welcome back to another edition of Last Night In The NBA where we bring you up to speed on everything that went down from the night before in the Association. It was a jam packed Sunday of hoops with 7 total games on the schedule, and one of the few days where things mostly went how you expected. We're running out of days left in the seeding game schedule with the playoffs slated to begin a week from today, so these games are now more important than ever. As always if you spent your Sunday outside like a weird person and missed the action, here's what happened.

We can make this one quick because I imagine a few of you out there were surprised the Wizards were even still playing in Orlando. There wasn't much to write home about given their 41/25% shooting, pretty much everyone struggled outside of Jerome Robinson

And hey, even with the Wizards now losing 6 in a row, at least their young guys like Robinson are getting reps. That'll help for next year I suppose.

For OKC, you may think there's no way a win over the Wizards is anything to note, but we've seen from time to time this bubble where good teams let one slip against a bad team and lose a game they had no business losing. Given how tight of a race OKC is in, these all matter, even the games against dogshit teams. Especially when you're young guys look so good

Neither Steven Adams or Dennis Schroder played in this game and it really didn't matter. The Thunder never trailed, this game was never tied, and theyh shot 51/46% with 18 3PM and just 12 TOs. This win keeps OKC in the 5 seed at the moment with a 0.5 game lead over UTA and they trail HOU by just 1.0 games. It's starting to look like maybe that OKC/HOU series we all want might actually happen. Feed me that drama.

You knew the Raptors were going to respond after missing every single shot they took agains the Celts, and it's not exactly like the Grizzlies are winning games at the moment so this result isn't really a surprise. I will say both teams wearing their throwbacks was one of the most visually pleasing games we've had so far, but there was only so much Dillon Brooks and Ja Morant could do to carry the offensive load

When 60% of your starters combine for 8 points and go 2-10 from the floor, that's an issue. Guys like Brandon Clarke and Grayson Allen were solid off the bench and combined for 36

but once that defense gave up a 40 spot in the second quarter, it was a wrap. The Grizzles had only 17 points in the third, Toronto got up by as much as 18, and the Grizzlies lead in the 8 spot is not down to just 0.5 games over POR. The Spurs only trail by 1.0 games too. Things are not looking great for Memphis right now which is really a bummer because they had an awesome season. Bubble life has not been kind to them that's for sure.

For TOR, what a difference it makes when you can actually put the ball in the basket. Unable to do that against then Celtics, they were much more effective in this one with 6 players in double figures, 15 3PM and honestly they were lucky to win this game because they finished with 25 (!!!!!) turnovers. That's an outrageous number. But Siakam was back to his old self

Lowry and FVV were effective

and their bench got back to actually making an impact. This looked much more like the Raptors team we'd seen during their time in Orlando, and that's why you can't overreact to one game. This team is still going to be a bitch to play no matter who they end up facing.

The Spurs just will not die. Ever. They are going to be competitive forever and there's nothing you or I can do about it. Who cares if they were the most boring team trying to snag that play in spot, they arrived in Orlando and just keep winning.

What's impressive about what the Spurs are doing is they've completely adapted and changed how they play since LMA went out. This is a team that shoots threes now! I thought I'd never see the day. Their young guards are carrying the load, DeRozan at PF is an interesting look that seems to be having success, would it shock anyone if this is the team that somehow made the 8th seed? That would be a bummer for a lot of people who aren't Spurs fans, but they are showing no signs of slowing down.

For NO, can we just get them on a plane and out of the bubble so they can begin their vacation? What a disappointment this team has been since the restart. All the hype, everything the league tried to do to get Zion into the playoffs and this is what they do? Lose every damn game because their defense is pathetic? Embarrassing. Wasting good Zion performances

their largest lead in this game was 1 point. It was tied twice and at no point whatsoever did this Pelicans team show an interest in playing defense. It was the one thing they had to do in Orlando to make the play in game and it never happened.

We'll talk about the Celts in their blog per usual, so for this we can focus on the Magic. They were without three starters so it's actually a positive that they were able to make this a competitive game all the way through OT. They played hard, made a bunch of threes, and the Celts really didn't have an answer for Vucevic

I actually didn't think that Fultz looked all that bad, he was aggressive and I feel like there were a handful of times he actually made a midrange jumper

That was the best I've seen him play BOS in probably his entire career. This is sort of how the Magic's season has gone to some degree. It seems as though they play almost anyone tough, and despite this now being their 4th loss in a row you have to give them credit with how they competed despite missing their best players. I'm not saying they'll upset the Bucks, but maybe they take a game? It's not like MIL looks all that great at the moment.

No Westbrook for the Rockets no problem. Not when you have James Harden and Austin Rivers combining for 73 points. You read that right, I said Austin Rivers

The Rockets took a little while to get going in this one, but once the second quarter hit their offense went nuts putting up 38, 32, and 36 point quarters. No chance the Kings offensive could hang with that, and the Rockets needed this one of they eventually catch DEN. That might be hard considering they are 1.5 back and the Nuggets have the Lakers tonight, but this just goes to show that even without Westbrook this roster is deep enough where they have guys who can erupt on any given night.

For SAC, like the Pelicans, it's been a pretty disappointing Orlando stay for this team. Another team not interested in playing defense and they'll end up in the lottery as a result. But hey, look on the bright side. They still have De'Aaron Fox and he's really really good

after that, things get less awesome rather quickly so don't worry about that other shit. Just focus on Fox and try to ignore the reality that this team blew their bubble opportunity.

Uhhhhhhhhhhh is it time to put respect on the Nets name? Beat the Bucks, then they came out and beat the Clippers with Kawhi playing 36 minutes??? Sure there was no Paul George but even still I doubt anyone expected a result like this. Shoutout BKN for putting up 55/46% and making 20 3PM. That came out of nowhere that's for sure

They dropped 45 points in the first quarter! In fact, the Clippers never led and this game was only tied twice. In the business we call that a wire to wire win and I sure as shit did not know the Nets had this in them. Credit to them,.

For LAC, outside of Kawhi's 39 there's not much to talk about

The Clippers need to get their shit together or they are at risk of dropping to the 3 seed. Maybe that's what they want so they can play UTA instead of Luka? Didn't know a Finals contender was in the business of dodging people though, that would be interesting. Obviously the key for them is health by the time the playoffs roll around, but with Harrell still not back yet, this team is not going to have a lot of time to play together before the playoffs start. That's something to keep an eye on.

And that's it! You are now all caught up with everything that went down last night in the NBA. We're back tonight with 5 more games including some awesome matchups like OKC/PHX, TOR/MIL, IND/MIA and DEN/LAL. Looks to be another great slate so let's have ourselves a Monday!