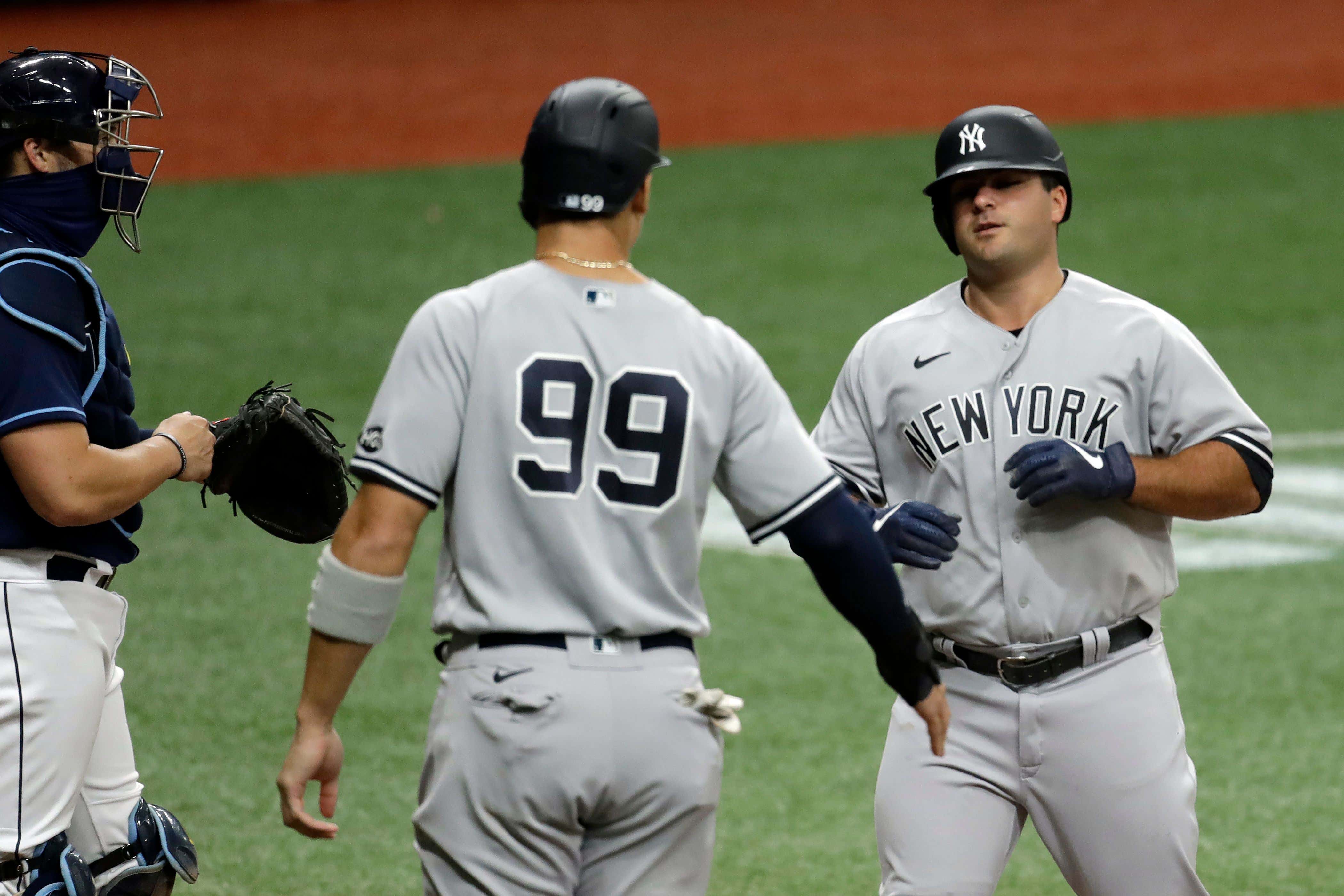 What's the best way to respond the day after getting two hit by the Rays? 1) Hit some bombs 2) Have Gerrit Cole pitch. Both things happened in Game 1 of Saturday's double header today and it resulted in the Yankees getting right back on track with a big win.

You might see this only being game 14 on the year and questioning how it could be considered big. Well, the Yanks had dropped 3 of 4 entering this one with the offense looking lost. Keep in mind it's also a 60 game season so getting off a little slide like this was massive. Facing them was the disgusting Tyler Glasnow. After striking out the side in the first, Glasnow ran into trouble in the second but escaped trouble by striking out Gary and Gardy with the bases loaded. With a guy like Glasnow you never know how many of those chances you're going to get. Gary swung at a ball over his head with full count which was terrible. Thankfully the Yankees would get to Glasnow in a big way the following inning.

Mike Ford, the surprising 3 hitter in this one, blasted off for the longest homer of his career against Glasnow in the 3rd.

The Pride of Motherfucking Princeton. Dude is just a baseball hitter. Get him at bats anyway you can. The Yankees have two starting first baseman and they both mash.

Later in the inning with two on and two out Gio Urshela ripped a double in the gap to give Gerrit Cole a nice 4-0 lead.

I'll keep saying it. Gio is one of the best third basemen in Major League Baseball. All for $25,000 via the Blue Jays. Maybe Cashman's best deal ever.

Gerrit Cole had a big lead to work with and continued to cook. I think this was the best stuff he's had in his four starts. The overall numbers won't tell the story because the Rays had some great at bats and made his pitch count climb. He didn't get through five in this one and threw well over 100 pitches, but the stuff was there. He generated more swings in misses in this game than any of the three prior starts. Probably the best fastball command he's had as a Yankee.

Just filthy. When he's on like this you have no chance.

He did get tired in the 5th and in Boone's effort to squeeze out a full 5 innings from him, the right hander served up a bomb to Jose Martinez on his final pitch. It does seem like when he does run out of gas the wheels fall off quick. Credit to the Rays today for fighting and getting him outta there early. That's a feisty lineup full of pests.

To get some insurance runs, Giancarlo decided to deposit this 2-0 hanging breaking ball into another orbit. Guy looks so comfortable at the plate it's terrifying.

Judge followed an inning later with his Major League leading 8th homer on the year. Of course this game was played at the Trop so it hit a fucking cat walk and landed on the field. If there was no cat walk that goes 450+. Demolish this place please. I still have PTSD from Clint Frazier's 9th inning homer here that was caught just off the infield for an out.

Chad Green and Ottavino followed Cole to shut things down in the later innings and nail down the win. Big way to bounce back from last night.