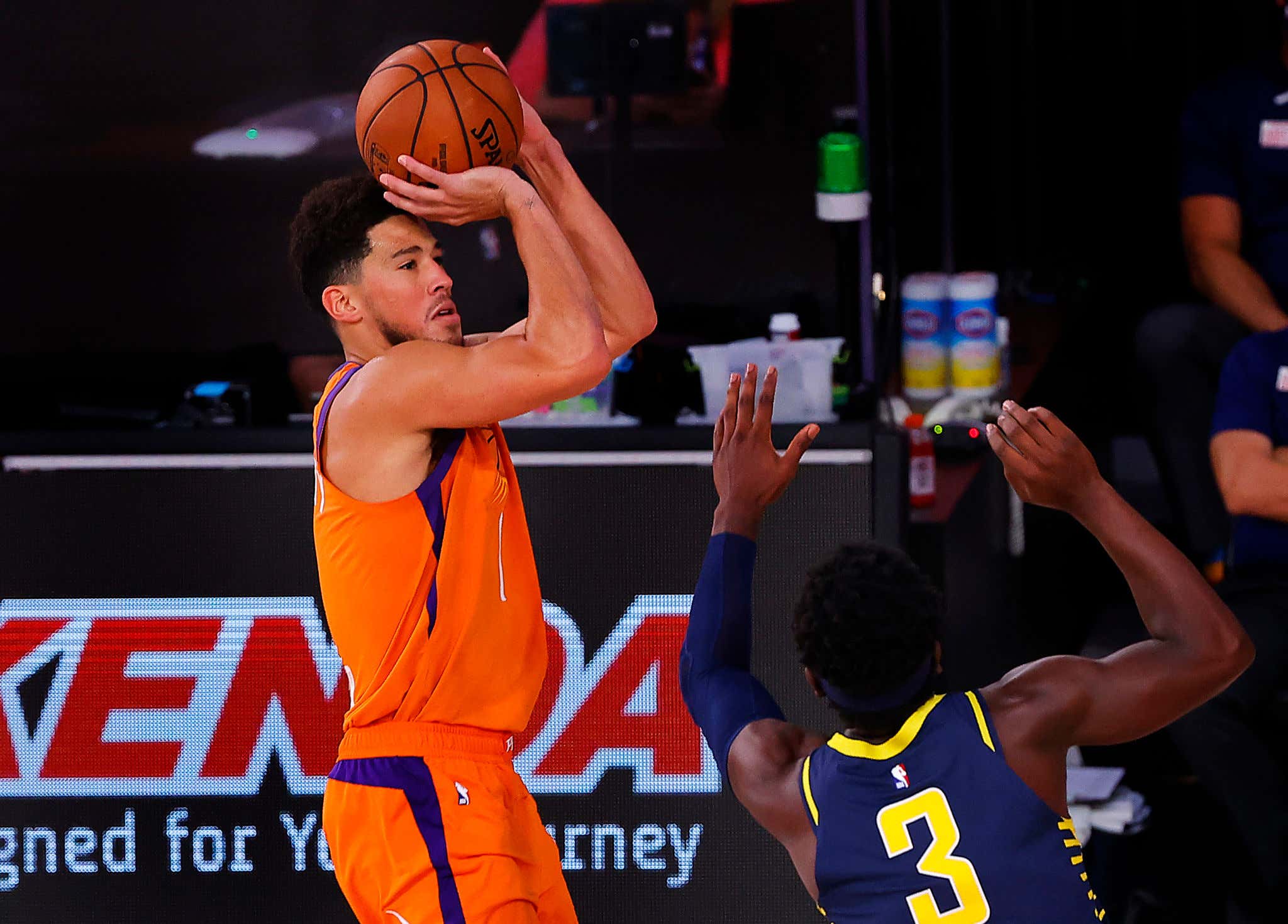 Good morning everybody happy Friday and welcome back to another edition of Last Night In The NBA where we bring you up to speed on everything that went down from the night before in the Association. Thursday was another night with 6 games on the schedule and for the first time during this restart every single one of them was a blowout. Normally it's been the exact opposite with these games but let me tell you if you hate defense and just love to see points, yesterday was for you. If you got busy and couldn't watch just keep reading, here' what happened.

Yeah, we're getting pretty close to just calling it a wrap for the Pelicans playoffs hope. They are now last in the fight for the play in game and all that hard work Adam Silver did to find a way to get Zion into the playoffs seems to be for nothing. That's what happens when you throw away your first game and then decide to play zero defense in any game following. You just can't be giving up 49 and 40 point quarters if you want to be playing in 10 days. It wasn't like the Pelicans were bad offensively, both Zion and Ingram were legit

The problem with NO is the same old shit. They can't stop a nosebleed. It doesn't matter if it's just against the Kings, that's a team with talent, you have to show up on the defensive end when you basically have to win out in order to make the playoffs. At this point would it shock anyone if they shut Zion down? What a blown opportunity for a team that actually looked pretty good in the scrimmages.

For the Kings, they probably won't make the play in either, but they've had such shit luck in the bubble it was nice to see them finally have a positive moment. De'Aaron Fox and Bogdanovic went nuts and combined for 65 points on 25-41 shooting

and as a team they shot 54/48% with 16 3PM. It's not like they played a ton of defense either, but when you are playing on that level offensively it doesn't really matter.

Man, what a wave of emotion this game had to be for Heat fans. One minute you are beating that ass, essentially waxing the floor with the Bucks. Making it rain from three, building a 23 point lead at one point, it looked like people really needed to start taking the Heat seriously. Duncan Robinson is lighting up the bubble like none other

Bam is turning into a star right before our eyes

Tyler Herro is balling off the bench

everything was going great. But then the second half happened. All that hard work was gone in 4 minutes. From down 17 to down 2 with 7 minutes left in the third. The Bucks were clearly tired of the Heat's shit and decided to do something about it. They really turned it on in the fourth quarter, MIA only scored 18 points and the next thing they knew it was THEM who was getting blown out. That's the bad part. The good part is the question for MIA was if their young unproven guys were going to be able to perform in the bubble and the fact they made 21 3PM tells me the answer is yes.

For MIL, all you really need to know is Giannis and Middleton combined for 66

There really isn't anything like this MIL team. No lead is safe, when Giannis decides to take over there is pretty much nothing you can do, then Middleton starts making crazy shots and it's over. Their defense in that second half looked much more like the league best defense we all know about, and to go from down 23 to at one point up 19 is pretty insane.

The message is clear. Don't you ever get comfortable with any sort of lead against the Bucks. That's a death wish.

I dunno about you but this was the matchup I was most excited for. Two teams that have been white hot in the bubble, the Pacers with Warren and the Suns with Booker, this game lived up to the hype and then some for pretty much 90% of the game. TJ Warren struggled at just 7-20 but that didn't really matter since Brogdon was back and looked fantastic

and Oladipo starting to round into form

Unfortunately, things started to unravel in the third quarter that bled into the fourth. Never great to give up a 21-0 run and the next thing the Pacers knew they were down 19 points. It wasn't like they played poorly, they were just hit with a wave of Suns dominance that I'm not sure any team in the league would be able to overcome. This was an important game for both teams in terms of the seeding, and now the Pacers have just a 0.5 lead over PHI for that 5 spot. The Sixers will need to win tonight and then gain another game to them since IND owns the tie breaker, but that race is now officially back to being wide open.

For PHX, at 4-0 they are the darlings of the bubble. Nobody thought they should even be there let alone have a chance to make the playoffs and now look at them. They're thriving. Devin Booker is letting the world know that he is very much a problem

Ayton is right there with him, turning into the beast that many thought he would be coming out of Arizona

The Suns are just so much fun to watch and why I'm rooting for them to make the play in. Give me POR/PHX.

I do have to give a shoutout to Cameron Payne as well. He was the one who really led the charge in that 21-0 run

where the hell did that come from?

Well this certainly looked a lot more like the Clippers we're used to. Three guys with at least 20

they shot 54/45% with 14 3PM and most impressively only 6 TOs. You aren't beating the Clips when they throw that up. All this with Lou Williams struggling and no Harrell yet in the lineup, the Clippers needed a game like this in my opinion. They've been so-so in their seeding games and eventually need to start to get back to normal if they want to go deep in the playoffs. The Mavs don't have the best defense so it was good to see LAC take advantage. This game was pretty close until the fourth quarter where LAC dropped 35 and pulled away, and they needed this game to stay 1.5 ahead of DEN for the 3 spot.

For DAL, Luka and Porzingis did their thing and mostly carried this team

The problem is they didn't get much help. The Mavs are a lot like the other semi contenders in this conference where their offense is great but their defense is filled with holes. For them to go anywhere in the postseason they need to tighten up that end of the floor. Giving up three straight quarters of at least 30 points sure isn't going to cut it.

Is there a more fun guard to watch in the bubble right now than Dame? Holy christ. The man is legit terrifying if he's playing your favorite team. You can't stop him. Then you sprinkle in some Nurkic who looks like his old self

and you can see why the Blazers are rolling and could very well take over the 8 seed. They trail MEM by just 0.5 games and it's clear the Grizzlies don't plan on winning any games in the bubble so it's only a matter of time before that happens.

We also have to give our respect to Gary Trent Jr. This man is playing his face off. I feel like I don't remember him being able to shoot threes like he has been in the bubble, but any Blazer fan will tell you this dude has been FANTASTIC

He's the difference maker this team needed off the bench and has been absolutely killing it so far.

For DEN, a game you would have love to have, but not the end of the world that you didn't get it. They still have a 1.5 game lead over HOU and only trail LAC by 1.5. Sometimes you just run into a buzzsaw and there's nothing you can do. The good news is Michael Porter Jr continues to look incredible

and they did shoot 52/50% from the floor with 14 3PM. That's good! The problem for them was similar to every other team we saw lose yesterday. Their defense stunk. Another team that gave up three straight quarters of at least 30 points, you just can't do that shit if you are trying to take down a team with talent. It's crazy the Nuggets are even in these games considering they are missing 3 of their best players, so that's why I'd be mostly optimistic as a Nuggets fan. You'll be fine once those guys get back.

I can hear the excuses from Lakers fans already. They didn't have LeBron! This game doesn't count! Hey assholes, the Rockets were without 2 of their 3 best players with Westbrook sitting and Eric Gordon being out. They played Jeff Green 27 minutes. What we learned is that the Lakers shooting problems are very much real, and without LeBron there to mask everything, Anthony Davis can't do it. He only had 17 points in 29 minutes

He should have destroyed this smaller HOU lineup. He's a top 5 player right? What happened? I'll tell you what happened, Kyle Kuzma led the Lakers in FGA. That's never a good idea

As a team the Lakers went 2-19 from deep, right after they missed a billion shots from three in their last game. Shocking that Dion Waiters and JR Smith haven't fixed that like Lakers fans wouldn't shut the fuck up about. Dion went 2-10 and JR 1-4. Not great.

Again, these games mostly mean nothing to LA given their seed is locked up, but it's still not what you want to see. All this does is raise more questions of if this team can get it done when it matters most. Now LeBron has a "groin" injury so who knows if we see him again before the playoffs. If this team never comes around in the shooting department, they are ripe for an upset.

For HOU, like I said no Westbrook and no Gordon but they did have James Harden and that man did whatever the hell he wanted against the Lakers defense

It was a classic Rockets win with 21 3PM and between Harden and then 35 points from Ben McLemore and Jeff Green it was pretty clear the Rockets have a much deeper roster than the Lakers and that could potentially be an issue. This team is built to survive guys being out, the Lakers not so much.

And that's it! You're now all caught up with everything that happened yesterday in the Association. We're back today with 6 more games which means it is once again setting up to be another great day of basketball. Let's have a great Friday!