(This blog was written a few days ago but got lost in the mix. I don't get to publish my own stuff yet since I'm still a rookie. Sorry for the tardiness but still wanted to get it up)

Had to go back through today's 20 wake up blogs to make sure this layup wasn't already posted. But Goddamn man, 2 years going on 10. Not sure if it's that 2020 has been a mindfuck in terms of sense of time - some days it feels like this year is flying by, others it feels like we will never see 2021. But the fact that Mac died a month and day after releasing this album is still so fuckin sad. Even two years later.

It feels like he was just catching his stride. Not that he wasn't dope as hell before "Swimming", (Best Day Ever is one of the best mixtapes of all time) but you could tell he had found his groove and was comfortable staying in his own lane. Which is why his death sucked all the more- I don't think anybody saw it coming. Or could point back and say, "yah we're not really surprised." The kid had the whole world in front of him, and MILLIONS of people who adored him. At least he got to feel the love for this record which he poured his heart into before he passed.

p.s. - Not to make this about me whatsoever but something super cool that I think old school stoolies will appreciate because I know how much I do. Back in 2009-2010 when we were doing Back To Stool and Stoolapalooza tours Dave, Gaz, Jenna Marbles, and I somehow lined up Mac Miller to open up. The first year was for Sammy Adams. The second was for Mike Posner, Wale, and T̶h̶e̶ ̶B̶e̶a̶t̶l̶e̶s̶ Chiddy Bang. This is early early early Mac Miller days. We're talking The Highlife, and K.I.D.S. Mac. So early in his career in fact that he didn't even have his own DJ.

Leading up to the shows we were all on a bunch of group emails together messaging back and forth coordinating this shitshow. His crew and he could not have been any nicer, down to earth dudes. Super grateful to be working with us. Keep in mind this was stone ages Barstool. There wasn't even a Milton office yet. We held meetings in Dave's conference room at his condo building in Dorchester. So the fact he was grateful as fuck to be opening up a Mike Posner concert (think about that) at UMass, and Lupos Providence, gives you an idea of the kind of character he had.

So long story short, they asked me to DJ for him, I couldn't say yes fast enough, and I got to spin for him. Super fuckin awesome memories that wouldn't have been possible without Portnoy. #teamportnoy 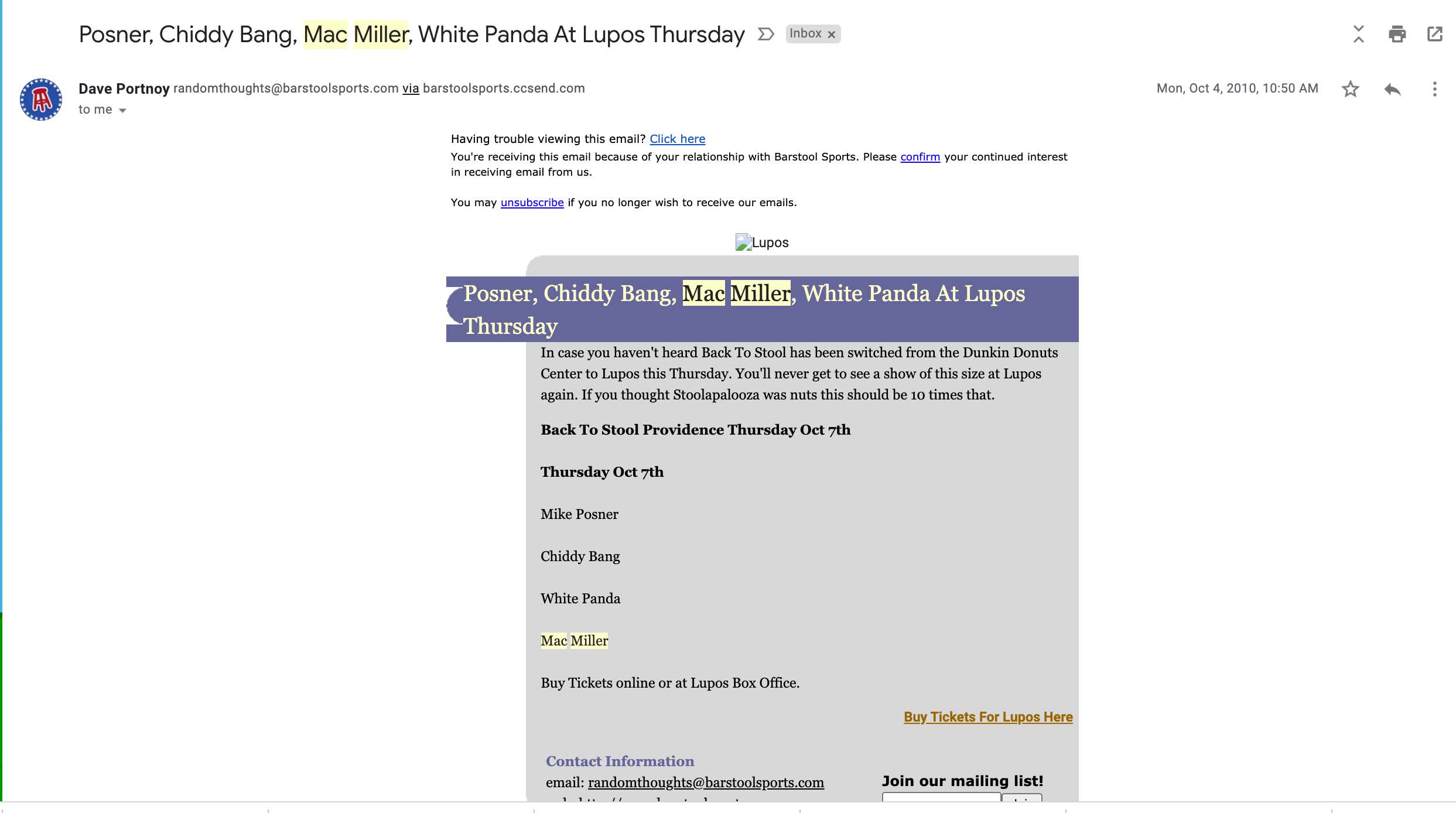 p.p.s. - That UMass show was the one we got banned at because Dave got on the mic at the end of the show and told the entire Mullins Center that the school didn't want us to party "but we were fuckin partying." A riot ensued a few hours later, cops came in on horseback, we took a bus back to Boston that broke down on a pitch-black highway (s/o Bustonian) great story for another time. But Dave had a warrant issued and pretty sure the dean said if he ever stepped foot in Amherst again he'd be locked up no questions asked. Wild times back then.