When the league decided on this 22 team format it was pretty clear they were looking for any way possible to get Zion into the playoffs. You can't really blame them, Zion draws eyeballs and eyeballs equals money. Sure maybe the Grizzlies may have felt the whole thing was a little bullshit, but they came out and are winless in the bubble so it's time for them to pipe down and accept the fact they are most likely going to end up in the lottery despite having an awesome season.

You would think with this new found opportunity to get into the playoffs that the Pelicans would do everything in their power to take advantage. Even if you thought it would be a quick series against the Lakers, when you have a young team every single playoff rep matters in terms of their development. Getting swept is still better than not making it at all. Well, they refused to play Zion in crunch time against the Jazz in a very winnable game that would have helped get them off on the right foot, they got demolished by the Clippers and things weren't looking great. After actually playing Zion real minutes they had a huge win of the Grizzlies and things were back to looking possible.

Which brings us to today's game.

They didn't have a Zion playing time issue, he was a MONSTER in his 21 minutes

But once again it was the achilles heel of the Pelicans that is ultimately going to determine their fate. Their defense is absolute trash. How else would you explain giving up 49 points in the first quarter? Not only that, but they doubled down and allowed 40 points in the 3rd quarter. That is not how you make the playoffs guys. The goal is to prevent the opposition from scoring. A quick look at the standings tell you things aren't looking all that great 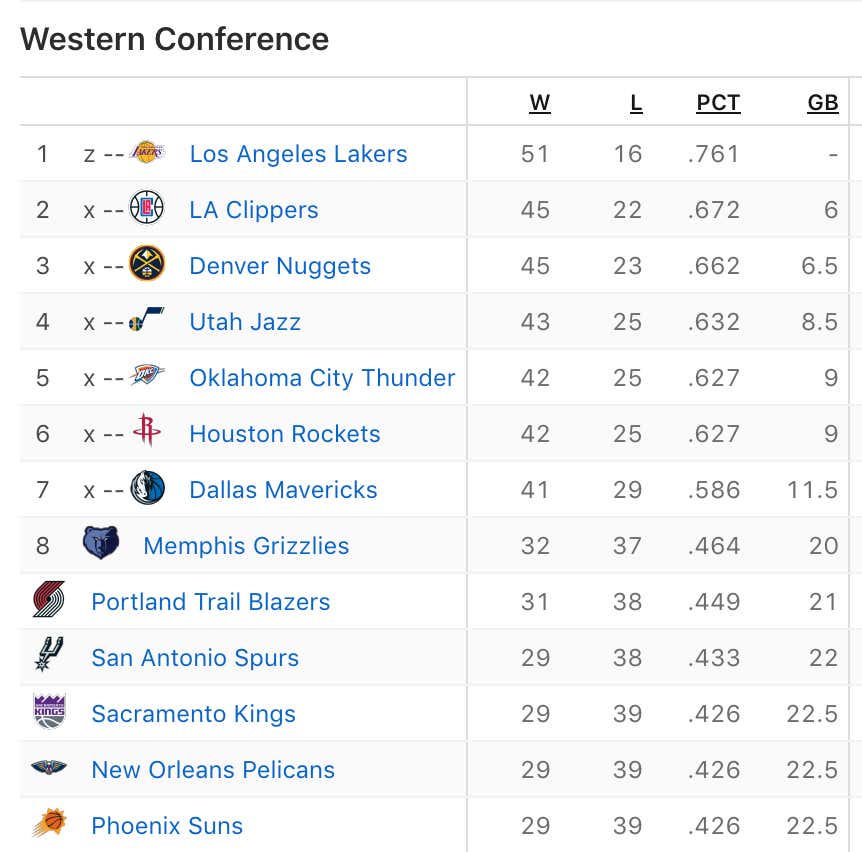 The Suns are one of the hottest teams in the whole bubble at the moment, and a win today would have them jumping NO. The Blazers don't look like they are slowing down and the Spurs refuse to go away so I'm not sure who the Pelicans are jumping if their defense continues to be this bad. It's almost like sitting Zion in that UTA game set the tone for this entire stretch of seeding games. Even with a closing schedule of WSH/SA/SAC/ORL do you feel confident in this group? How could you seeing what they've put out there defensively.

while watching the Pelicans play. They were the reason this play in format even existed in the first place and they are fumbling their opportunity like you read about.

I'm not a huge math guy so I'm going to assume the Pelicans are technically mathematically still in it, but this does not look like a team that is ready to win out and find a way into the play in. That's why as much as I think it would be fun to see Zion in the playoffs, I'm officially rooting for a PHX/POR play in game. That would be way more entertaining giving how all these fringe playoff teams have looked. Maybe I'll be wrong and the Pelicans will turn things around and I'll be interested to see how they are officiated moving forward. You know David Stern would pull some shady shit in order to get Zion in and the ratings be massive, let's see if Adam Silver is willing to do the same.