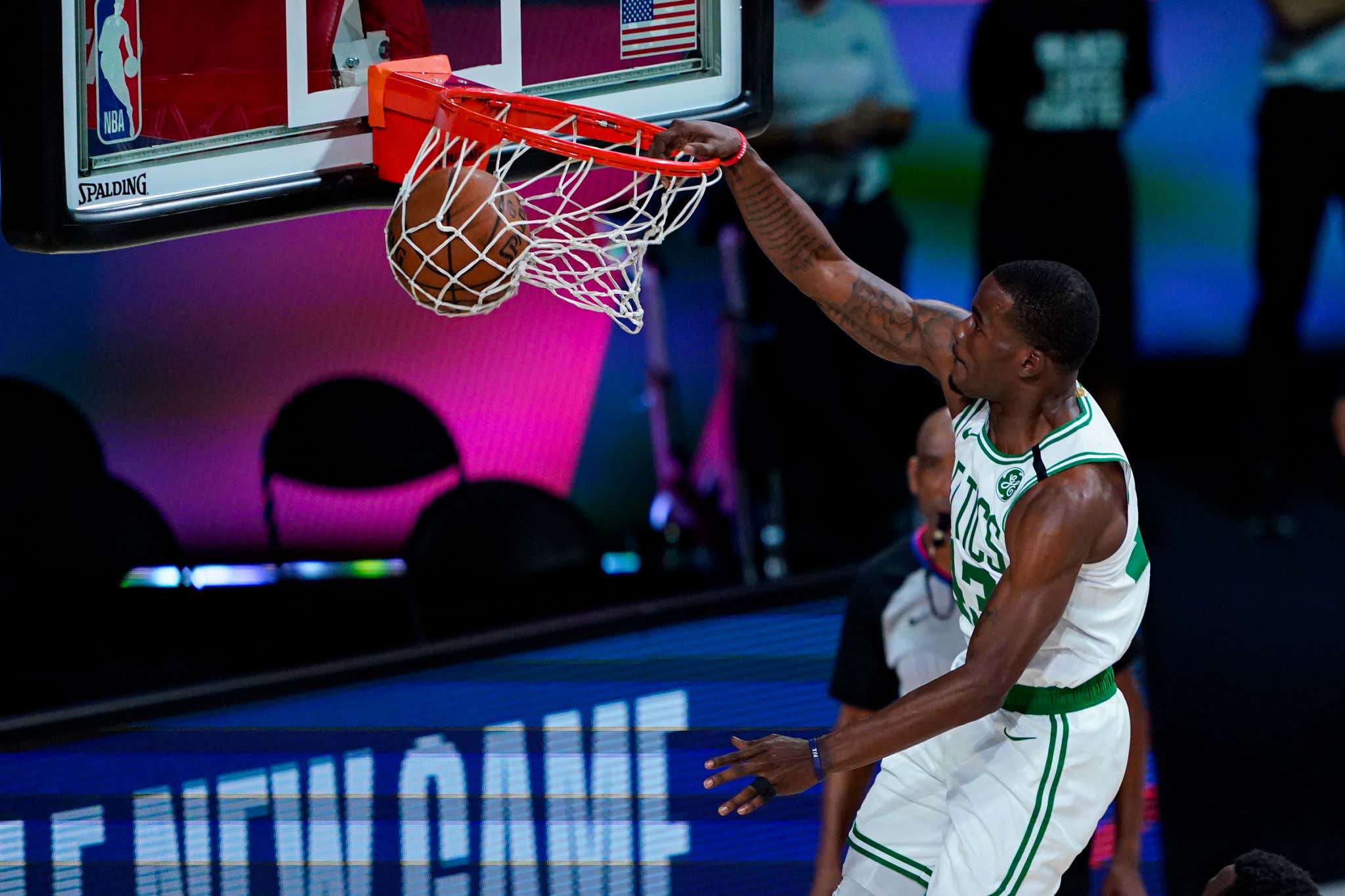 It's important that I remain consistent. After a brutal Celtics loss I can't sit here and have the stance that it would be silly to think that result guarantees anything in the playoffs and then when the Celtics have one of the best offensive nights I've ever seen tell you that this means everything is fixed and they are destined to make a deep run. That's not how this works. This blowout win means the same thing in terms of their playoff chances. Nothing. It's not just because it came against the Nets (who just beat MIL maybe you heard), I will feel this way if the Celts drop 149 against the Raptors tomorrow. The results of these play in games really isn't all that important when evaluating this team. What matters is how they look. They can play well and lose and I'll be fine. They can play like dogshit and win and I'll be annoyed. For me these games are about finding a rhythym, getting in game shape, formalizing rotations and being mentally prepared for the playoffs. That's really it.

Having said all that, I don't know who needed this type of performance more. Us fans certainly needed some sort of positivity after how terrible they looked on both ends against MIA, and I'm sure the players needed a night where they actually saw the ball go in. Let's all be honest with each other, it is not the norm for this team to drop 149 points and shoot 56/51% with 20 3PM. It just isn't. But I'll fucking take it I'll tell you that much.

At the very least this performance should have spirits much higher heading into tomorrrow's battle with TOR who looks pretty goddamn unstoppable, but before we focus on that let's relive the glory that we all witnessed last night in the bubble.

- How does one choose who gets the starting spot in this blog when almost everyone who touched the floor played well? Luckily I am a highly trained professional and am qualified to make that choice. After looking over my notes things were pretty obvious. We're starting with Jaylen Brown.

I get a lot of flack for my stance that Jaylen Brown's leap has been JUST as important for the team's success as Jayson Tatum, but I will never back down on that claim. Ever. The fact that Jaylen has turned into a consistent All Star caliber player who is also efficient from both the floor and from three is the key to everything. Yes, Tatum may have the higher ceiling, but the more and more we see of Jaylen in the bubble he's playing like their best player. I'm not even sure that's debatable. I felt like he was much more locked in last night, his three point shot rebounded well from his 0-5 performance against MIA and he finished with 21/4/2 on 7-13 (5-9) in his 23 minutes. The box score is nice to look at but when you watch him you see this uber aggressive and confident wing who can not only hurt you by scoring, we actually saw some legit playmaking from Jaylen! Everything from his mindset to his production in the bubble has been pretty ideal, and if this is what we get for the duration of their stay this team can be a problem.

- Sooooooooo this is the Robert Williams we all dream about right?

Finally Brad took the training wheels off and gave him some legit minutes and what does he do? He responds with 18/5 on 7-7 shooting with 3 blocks and a perfect 4-4 from the FT line. Everything we love about Timelord we got in this game. Awesome lobs, great rim protection, good ball movement, and for the most part some limited defensive mistakes. Nobody on this roster lives off unproven hype like Williams, so it was awesome to see that actually come to fruition in a real game that counts. It's not like the big man rotation is set in stone on this team, so a performance like that could very well earn Timelord some rotation minutes. I'll be interested to see if he plays tomorrow or if this was just a Nets thing, but I'm certainly intrigued.

The big thing is playing with the right lineups, and I have more on that in a minute.

- That's right, we're going back to back with young studs

You know who made probably the biggest impact in this game? Romeo. That's no bullshit. He also finally got some legit minutes and right away he reminded everyone that defensively he's already an NBA rotation player. It's no surprise that once he stepped foot on the floor the game started to tilt. The man was a +27 in his 25 minutes! That was good for the second most on the team.

When I think of both Timelord and Romeo, it's important that they get their minutes with the starters. That's where they can thrive in their roles. I think of it a lot like when I was training Walter when he was a puppy. I wanted to set him up for success. Put him in situations I know he can succeed in that will help build up his confidence. I knew he was going to make mistakes and have accidents and all that, but I could control the situations I put him in. Brad should do the same with those two. You play them on the second unit and they force things too much, their mental mistakes are magnified, it's not great. But you put them on the floor with 3 or 4 starters who know how to play? You get performances like we saw last night.

- I tried to prepare you all for Orlando Hayward. I gave you the metrics, I gave you the gaming science, it was no bullshit. Well, look who looks better than ever

Guy still can't make a wide open layup to save his life but whatever. That's basically a requirement to play for the Boston Celtics. We've had nothing but aggressive Hayward in Orlando and the difference it makes for this roster cannot be understated. He's attacking, he's getting to the line wayyyyyyyyyyyyyyy more than he was during the season pre-hiatus, and we're starting to get the version we all hoped for when he first signed. If that doesn't excite you then you're simply a Hayward hater and nothing will ever change your mind.

You also can't ignore his production since he found out he was having a boy. It's legit

- I feel confident in saying this was the best Brad has looked in any game so far. He was calling timeouts at the right time, his rotations were pretty good, he clearly had the team motivated, all things I desperately needed to see from him.

- Speaking of their effort, it could not have been more night and day from the MIA game. They came out with great energy, the defense was moving and guys were closing out with great energy. Just watching them it looked like a completely different team. It makes no difference to me who they were playing, effort and energy is not reliant upon your opponent. That's something the Celts can control and it was MUCH better in this game.

- Oh right, remember Jayson Tatum? Yeah, the man was on a mission from deep in this one

Probably mad about his early fouls, Tatum decided to do nothing but shoot threes and the fact that he is so smooth and so confident taking step back threes over a 7 footer breaks my goddamn brain. He finished 7-11 (5-8) which I have to say is a little confusing. I was told he couldn't shoot because he didn't have a hoop in March and was playing too much golf, so what gives? There were people hitting me up on Twitter who were legit annoyed saying he should be getting more shots up in practice. Like how the fuck does anyone know how many shots Tatum is taking in practice?

But that's life in 2020. Everyone needs to find some sort of narrative even if it's beyond ridiculous. A bad shooting game in August is the result of not having a hoop for 2 weeks in March. Pundits really fucking said that.

- I could watch Javonte dunk all damn day

- Something still feels a little off with him, but I enjoyed the vintage Marcus Smart 2-5 shooting night but being a +18 due to his 5 rebounds, 6 assists, and 3 steals. That's the Marcus I know and love.

- I'm also a little worried that Brad doesn't seem to want to pull his players when they get in early foul trouble. Is that just a seeding game thing? Because for the second game in a row he left his guys in and they immediately picked up a foul they had no business getting. Last night it was Tatum with his 3 fouls in the first 6 minutes. He then didn't play the entire second quarter. On a night when you didn't have Kemba I would have thought Brad would have been smarter about pulling his best players to avoid that pickle.

- Big time disaster defending the paint. Something the Celts are 3rd in the league in, they allowed 72 points in the paint this game. That's like 40 more than their average. I didn't even think Theis' individual defense was that bad, but man this team is getting dominated inside each night.

- If Rob is going to play more, he has to get lower and in a better defensive stance. That's his one major flaw at the moment that he really has to focus on. The blocks are great, but give me some consistent legit positional defense and I'll demand Brad play you 30 minutes a night.

- I'll also be consistent when it comes to FTA. The Celts got the better whistle in this game there's no denying it. It was like 21-6 or some shit at one point. I know what the NBA was doing and frankly I reject their apology. But we can't sit here and complain about the fouls and FTA in losses and then pretend like we didn't get the benefit last night. Basically I'm saying the officiating in all these bubble games for every team in the league has been pretty terrible and needs to be cleaned up by the playoffs.

- How do you find something for this section in a game you were once leading by 34? Easy. When the hell are we going to get Tacko? If anything I would have thought this was one of the bubble games he would have been active. Just give the people what they want Brad, christ.

- I'm really starting to wonder if Grant has fallen out of the rotation. He made his only three which was cool, but something seems off with him too.

I'm now interested to see if this team can build off this performance against a team tomorrow that is roughly 1 billion times better than BKN. In terms of seeding things are pretty much locked in with TOR/BOS, but this is another legit test for them to see how they stack up against contenders. It's been a mixed bag with that so far, more bad than good I'd say, so show me you are actually turning a corner.