The Federal Bureau of Investigation also searched two locations in Las Vegas, but no one was taken into custody during the raids and no arrest warrant has been issued for Paul, the agency said.

Paul, 23, was not present when his home was searched, according to Laura Eimiller, an FBI spokeswoman in Los Angeles.

Paul’s lawyer, Richard Schonfeld, in a statement acknowledged that his client’s home was searched and promised cooperation with the investigation.

Here's a video of him at the scene of the crime:

Did they find anything in connection with the looting? Who knows, but they did find some firearms which were spotted being removed from the house... 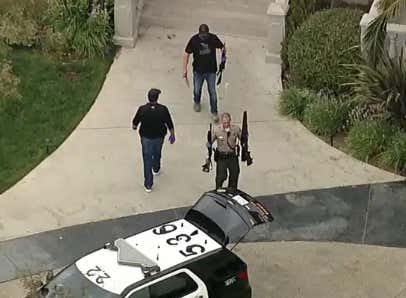 As were the police rolling up to it …

Donnie wrote about this yesterday so make sure to check out his blog. This kid has $19,000,000 in the bank so I think he'll be fine. On to the next one!