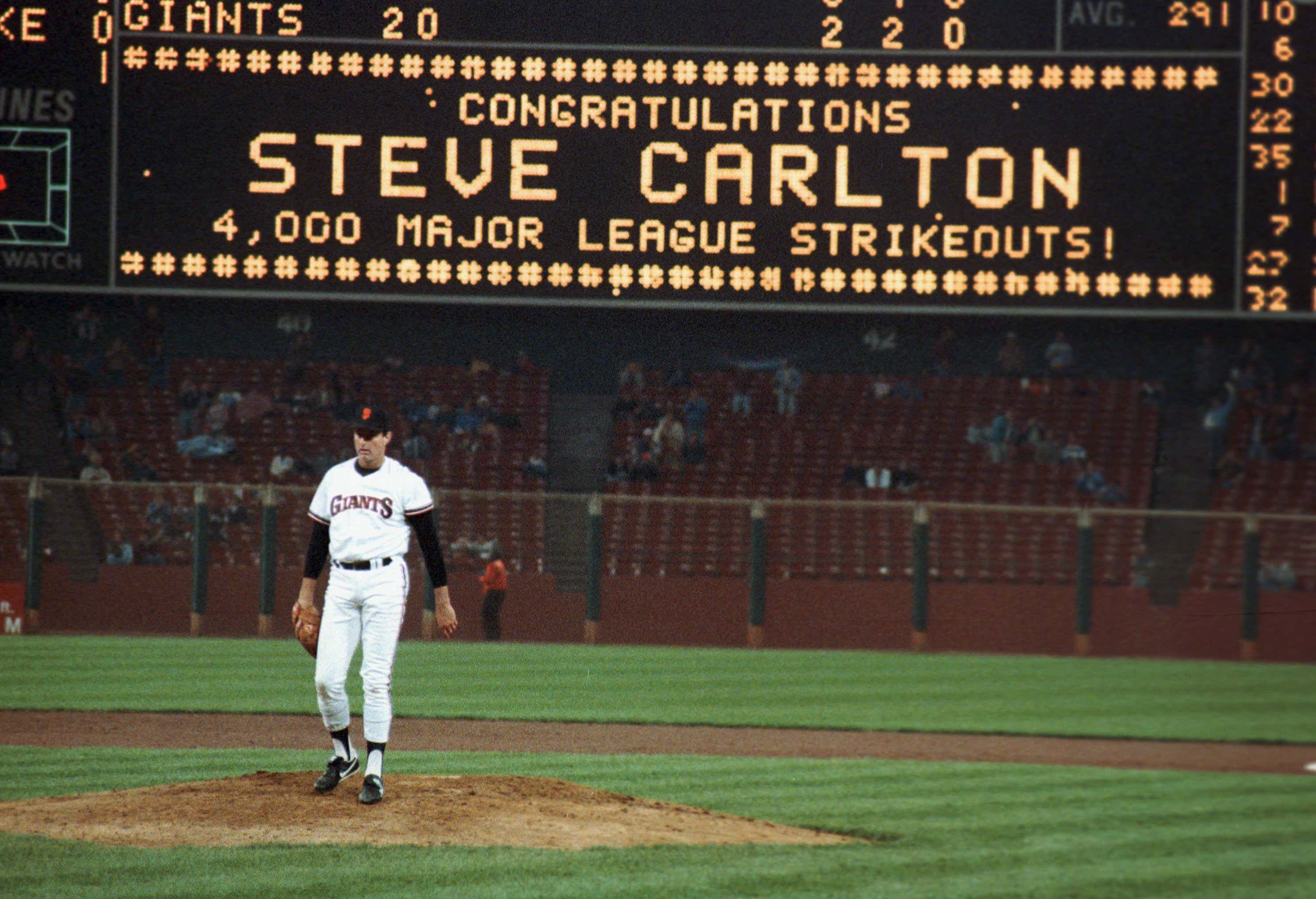 Steve Carlton of the San Francisco Giants becomes the second pitcher to reach 4,000 strikeouts when he gets Eric Davis of the Cincinnati Reds swinging in the third inning at Candlestick Park. Carlton, who had released by the Philadelphia Phillies in June and signed by the Giants on Independence Day. Carlton would surrender seven runs as the Reds won 11-6. The Giants would release Steve Carlton two days later. Carlton pitched two more seasons, bouncing around as he finished with 4,136 strikeouts.

Steve Carlton was born on December 22, 1944, in Miami, Florida. At the age of 20, the hard-throwing left-hander made his debut with the St. Louis Cardinals. In seven years with the Cardinals, Steve Carlton showed flashes of brilliance as he pitched in the shadow of Bob Gibson. On September 15, 1969, Carlton set a nine-inning record with 19 strikeouts against the New York Mets in a 4-3 loss giving up a pair of two-run home runs to Ron Swoboda. After a contract holdout in 1970, Lefty had a disappointing 19-loss season but rebounded for his first 20-win season in 1971.

With another holdout looming in 1972, the Cardinals traded Steve Carlton to the Philadelphia Phillies for Rick Wise at the start of Spring Training. At the time of the trade, the Phillies were rebuilding and were among the worst teams in the National League. Steve Carlton made an excellent first impression in Philadelphia by winning five of his first six decisions after a players’ strike slightly delayed the season. Steve Carlton would fall victim to the Phillies' lack of offense in his next five starts, losing all five as the Phillies only scored a total of ten runs. After the losing streak, Carlton ran off a 15-game winning streak. During the streak in which he made 18 starts, with three no-decisions Steve Carlton allowed 28 runs on 103 hits in 155 innings while striking out 140 with just 39 walks. When the season was over, Steve Carlton had nearly half of his team’s wins with a record of 27-10, as he won the pitching Triple Crown with 1.97 ERA and 310 strikeouts.

After his historic 1972 season, Steve Carlton suffered a setback in 1973, losing 20 games. However, there would be more greats season to come as he became the first pitcher to win the Cy Young four times, winning it in 1977, 1980, and 1982. Though fans never knew his feelings, as Steve Carlton began a decade long silent treatment of the media in 1976.

As he was racking up wins and awards, Steve Carlton was collecting strikeouts. In 1983, both Nolan Ryan of the Houston Astros and Steve Carlton were in reach of Walter Johnson’s career strikeout record of 3,508, which had stood for over 50 years. Ryan was the first to pass Johnson, but Carlton was not too far behind. Over the next year, Ryan and Carlton would swap the all-time strikeout record five times. Heading into the 1985 season, both Nolan Ryan and Steve Carlton were in reach of 4,000 strikeouts. Ryan was had a two-strikeout edge over Carlton with 3,874 Ks. Ryan would reach 4,000, but injuries took Carlton out of the race to be baseball’s strikeout king.

After posting a 1-8 record with 48 strikeouts in 1985, Steve Carlton continued to struggle in 1986. Sitting a 4-8 with an ERA of 6.18, with 60 strikeouts. Though he needed 18 more strikeouts to reach 4,000, the Phillies decided to release Lefty on June 24th. Ten days later, Steve Carlton was picked up by the San Francisco Giants as he talked with the press for the first time in a decade.

With the Giants, Steve Carlton continued to struggle with just one win in five starts during July. With a 1-2 record and an ERA of 5.52, Carlton made the start at Candlestick Park on a Tuesday night against the Cincinnati Reds, who had Mario Soto on the mound. Carlton needed just three strikeouts to reach 4,000. The first inning was not good for Carlton as the Reds plated three runs. Will Clark got San Francisco back in the game with a two-run home run in the bottom of the first.

In the second inning, Steve Carlton drew closer to history by fanning Wade Rowdon and Mario Soto. After Buddy Bell and Dave Parker singled to leadoff the third inning, Steve Carlton reached 4,000 strikeouts by getting Eric Davis to swing and miss. The crowd at Candlestick gave old Lefty a standing ovation as he tipped his hat and was congratulated by catcher Bob Melvin.

Not long after his history-making strikeout, Steve Carlton uncorked a wild pitch to make the score 4-2 in favor of Cincinnati. In the fourth inning, Carlton day came to an end, as he allowed three more runs. The Reds would go on to win the game 11-6 as Steve Carlton was waived two days later.

Steve Carlton would finish the 1986 season with the Chicago White Sox, where he pitched slightly better. In 1987 Carlton continued to bounce around, splitting the season with the Cleveland Indians and Minnesota Twins. Though he was left off the playoff roster, Carlton earned a third World Series rind with the Twins. Carlton remained on the Twins in 1988, posting an ugly 16.76 ERA in four games as his career came to an end.

Steve Carlton would finish his career with 4,136 strikeouts, ranking fourth as Roger Clemens and Randy Johnson later passed him. However, the 4,000 strikeouts remain the top mark in the National League.