I put the full highlight package in this blog for two reasons. 1) For the people who maybe thought "I am not sure if I want to stay up until 1AM watching a hockey game in August" and 2) for the people who were trashing Corey Crawford in my mentions last night. They need to watch those goals before they pin everything on Crawford. I am still VERY mad at those people.

So let's just start right there. Corey Crawford does not look like himself. "Himself" means a top 10 goalie in the league. That is what he was before the quarantine kicked in. That is what he has been consistently when on the ice for the majority of his career. He is a true difference-maker in net. I said after Game 1 that Crawford was noticeably off and that he was the worst player on the Blackhawks in Game 1. I don't mind telling the truth. Which is why I want to clarify my position on his play in Game 2. He wasn't sharp. Was he the worst player or the main reason why the Blackhawks lost Game 2? Absolutely fucking NOT. There's a lot of people vying for that title. When you stats only and you see 6 goals, you want to blame the goalie with a substandard sv%. When you watch the highlights you realize that it wasn't his fault.

Goal 1: Boqvist gets lost and McDavid does a McDavid thing and snipes a rolling puck under the bar from point blank range. That's not on Crawford.

Goal 2: McDavid does a McDavid thing, blows Maatta's doors off, tucks a backhander under the bar. Crawford cut down the angle well. He was square. He was on-time. McDavid is just the best player in the world and made an incredible play. That is not on Crawford.

Goal 3: Bad turnover by Nylander followed by Nylander just doing the tip drill in the high slot which put the puck through Crawford's 5 hole. That's not on Crawford.

Goal 4: McDavid double doink off of two Blackhawks and into the net. Again, not on Crawford

Goal 5: Crawford mishandles the puck behind the net. That is on Crawford.

Goal 6: Neal, an old ass man who is now slow as hell, goes in 1 on 2 against Boqvist and Strome and they just let him walk all the way to the front of the net. It becomes a scramble in front because neither of those guys wanted to defend. Crawford goes down, Chaisson comes in and deposits the loose change. That is also...not on Crawford.

So no, Crawford doesn't look sharp, but he did NOT cost the team the game in any way shape or form last night. I actually thought he looked a little better than game 1. People saying that he sucks or that he's an embarrassment or any of the other things I saw on twitter last night are MORONS who don't understand what they're looking at. Nobody is happy with an .829 sv%. He needs to be better. The Blackhawks need Crawford to effectively steal a game at some point, but he hasn't outright lost them a game like people are suggesting even if he isn't at his best.

And you know what...of COURSE he's not at his best. This is where I get actually angry. Take a second to look at the situation. Corey Crawford had fucking COVID-19. He missed all but one day of training camp. He went 4 months without seeing any pucks, and then couldn't get in shape or see action in practice because he needed to be quarantined. He also has a young baby at home. He also is an unrestricted free agent. I am SURE that everyone in his life, his wife, his agent, his family, fucking EVERYONE wanted him to opt out. Nobody would've blamed him under the circumstances. Opting out was the smart thing to do, in all honesty. He said no. He wasn't going to let his guys down. He knew they needed him. He knows what the playoffs mean. He wanted in and he's in and he's competing his ass off. The first two games just haven't gone his way because of bounces and circumstances but this guy is a WARRIOR and everyone needs to recognize that and get off of his fucking back.

Now that I have that off my chest...on to the people who actually deserve blame for last night...

Let's start at the top

--Jeremy Colliton...what are you doing?

Drake Caggiula was suspended for a hit in Game 1. Colliton was super coy with the media about who would be taking Caggiula's place in the lineup for game 2. "Tune in at 830pm" he said when asked. He said that as if John Quenneville was some big fucking state secret. I am not going to sit here and say that Colliton had a really great option for that spot. I would've gone with Sikura or maybe Hagel. Instead it was Quenneville and it took Colliton about 5 minutes to regret that decision because through 2 periods Quenneville had a total of 3:14 seconds of ice time. If you instantly don't trust a guy on the ice then he wasn't your best option and you made a mistake.

Now, having a 3rd line RW miss a game shouldn't be a death sentence, but for the Hawks it is. You lose Caggiula and suddenly that line with Dach and Debrincat is missing something. Then when Strome and Nylander take the night off you're effectively left with 6 forwards you can trust and the Hawks just loaded up. You could tell that the Blackhawks completely ran out of gas in the 3rd period. The top guys played okay. They had their moments, but asking two lines to do everything is never going to work. Which brings me to... 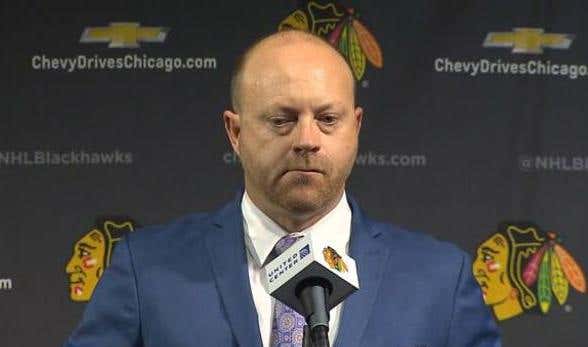 --This roster is extremely flawed. Watching last night, I couldn't help but wonder how much better this team would look if they had Jokiharju instead of Maatta and Kahun instead of Nylander. Kahun isn't some sort of all-star, but he is a competent NHL winger who had some great moments for the Blackhawks and was a very solid player for Pittsburgh this year. 31 points in 56 games is nothing to sneeze at. Both Jokiharju and Kahun found themselves in Colliton's dog house last year, somehow, and they were summarily traded for lesser pieces and in the Maatta case a much more expensive piece. Maatta has been fine for large stretches this year. Call me crazy, but I'd rather have the guy on his ELC who was a first round pick and looked great as a rookie when Joel was the coach.

People always say that "oh the Maatta thing isn't a big deal because the Hawks can just buy him out". That is true to a degree. They can buy him and only have a cap penalty of $680K. Well, that dead money adds up when you're right up against the cap. The Blackhawks have Seabrook and Shaw coming back on the books from LTIR next year for a combined $11M. Corey Crawford or another starting goalie will need a new contract. Debrincat's deal kicks in at $6.4M. Kubalik is a free agent. Caggiula is a free agent. Strome is a free agent. The Blackhawks finished 12th in the West this year. The roster will almost assuredly be worse next year because of cap limitations and bad contracts.

That brings me back to the original point that losing Caggiula shouldn't have derailed the entire lineup, but it did. That is because the Blackhawks have seemingly zero organizational depth. If Colorado or Boston or Vegas, the teams that the Blackhawks want to be competing with, lose a player of Caggiula's ability they don't miss a beat. That is because they've got depth guys who can adequately fill in when there's injuries or suspensions. The Hawks don't have that. While Colliton chose the wrong guy, Stan also left the cupboard pretty bare.

--Nylander was terrific in Game 1. Forechecking. Winning battles. He made a difference with and without the puck. Last night he was the player we were used to seeing all year. Out to lunch mentally. Getting lost defensively. Fly bys when forechecking. He's an extremely frustrating player. He has the talent, but at some point you just have to call a spade a spade and wonder if he's ever going to be a consistent NHL player. He's been handed so many opportunities and he can't deliver at a level that makes him worthy of a roster spot, let alone playing in a top 6 role with Patrick Kane.

--Dylan Strome...I mentioned he's a free agent as well this coming off-season. Last night was the type of effort that makes you think that maybe the Hawks should just let him walk. -4, chances were 10-0 against and all of that happened while he was basically benched. He only played 13 total minutes. It's hard to be on the ice for four goals against when you're barely playing and I don't like using +/- that much as an indicator of individual performance, but when you have numbers like that you can't say it's coincidental.

--I've been ragging on the depth guys pretty hard, but I liked the 4th line for the most part last night. Kampf-Carps-Highmore...they work hard. They played their opponents pretty even which all you can ask for. I'd like to upgrade the 4th line. I miss the days of having Bolland-Kruger-Frolik as a 4th line and just dominating everyone, but I appreciate the effort those guys bring.

--Murphy and de Haan weren't as strong as they were in game 1, but that is going to be function of d-zone starts and playing against some all-world talent. When they don't have support of the forwards like they need they're going to get pinned down and turnovers are coming back at them. We still like those two guys

--Boqvist had a rough night. Too soft on pucks. Suffered from a little of the Nylander-syndrome where he just didn't seem mentally sharp. He needs to be an impact player. Another guy with all the talent that is frustrating because you can't fully trust him. BUT...maybe the roster shouldn't be constructed to the point that you need to have a 19 year old in your top d-pair.

Some changes are going to need to be made before Game 3. I don't know what those are exactly. I don't think Colliton will ever remove Nylander from the lineup. I don't think he can remove Strome. I also know that going with two lines and rotating in the Carpenter line isn't sustainable. The effort needs to be better from 17 and 92 if the Hawks are going to have a chance. That's the scary thing about this roster. There is no room for error or a night off. Maybe give Sikura some burn instead of Nylander. Maybe put Kampf or Carps as center on a line with Sikura and Caggiula and put Hagel on the 4th line. Those players aren't as talented as the guys they're replacing, but at least you know you'll get an honest effort and a lot of times in the playoffs that is what matters most.

Nobody was thinking the Hawks were going to sweep Edmonton. Hell, nobody ever really gave the Hawks a chance at all until after Game 1. I still believe in the group. I believe in my guys. 19, 88, 2, 50, 77, 12, 8, 20, 44, and 5. Can they be good enough to push this series to the distance? We'll see. The Hawks have "home ice" next game which means they can dictate matchups with the last change. It'll be a big test for Colliton to see if he can push the right buttons to turn this ship back around. See ya all on Wednesday night.