I can't imagine this blog will resonate with anyone under 40 years of age or with anyone who is under 250 pounds, butt-fuck it, I am writing it anyway because I don't give a shit about baseball and Tommy Chong has already taught me all I need to know about the dangers of CBD.

Here are two facts about me that you may or may not know:

1) I haven't had a good night's sleep in years.

2) I walk around at a weight that hovers between what physicians refer to as "obese" and "morbidly obese."

For many years I thought the first fact was a direct result of the second fact.  Therefore, 1 would never get better until I knuckled-up and did something about 2 through diet, exercise, and cocaine.

And for years, I have had varying success... If a sudden health kick and/or stomach virus saw me getting closer to 260, my snoring decreased, and my sleep improved.

Conversely, if the holidays pushed me back up into where I was walking around with a 3-handle, then my fatty mastiff-like neck would cause me to loudly toss and turn all night.

This year, post-holidays, I had a small health scare.  I say "small," but it was large enough for me to go to a doctor who ordered a battery of tests to find out just what ails me.

As I scheduled and began the tests in late February, the pandemic hit in mid-March, so almost everything was put on hold.  And, like everyone else who didn't buy a Peloton, I stayed indoors for the next few months and stuffed small sweet peppers with sausage and cream cheese.

Now that the quarantine restrictions are lifting, my tests are all being rescheduled, including the first one, which I took last week... An at-home sleep study.

I didn't ask for the sleep study, and it was a  WAAAAY lower priority on the list of tests I needed to have done.  But it was also one of the easiest tests to schedule, so I banged it out last week.

Today, less than a week later, I have a CPAP machine at my door and a voice-mail from my pulmonologist saying, "Call me immediately."

For the 2 or 3 non-fatties still reading, you may be asking-

"What the fuck is a CPAP machine?"

"Is it somehow related to a pap smear?"

I am glad you asked.

Use of a Continuous Positive Airway Pressure machine (CPAP) is a standard treatment for obstructive sleep apnea.  A CPAP  uses a hose and mask or nosepiece to deliver constant and steady air pressure to a patient while he or she is sleeping.

A pap smear, on the other hand, collects cells from the lower, narrow end of your uterus (not mine) to test for cervical cancer.

(and this is Pat Smear, the often creepy-looking guitarist who toured with Nirvana and played rhythm guitar on a couple of Foo Fighters' albums)

So I called my doctor today, and he proceeded to give me some OUTLANDISH stats of how many times I stop breathing at night, and how my interrupted sleep-pattern is negatively affecting my health on several levels and probably for several years.

He ordered me to start using the CPAP as soon as I received it and to schedule yet another sleep study... But this time, one that is held at a local sleep center... Where I hear they pump sedatives into the sleep study rooms and let local prisoners come in and molest your anesthetized genitals.

But that might just be a rumor to attract patients.

Going back to the beginning of this blog, I asked my doctor a question (after he sufficiently scared the shit out of me)... "Doctor, is my sleep problem a result of my weight problem, OR do I have a weight problem because of my inability to sleep?"

And he said, "That's what we're going to find out."

Again, this will mean nothing to the people who are in good shape, but for someone who has been zoftig since the womb, if there's even a slight chance I can blame my itchy sides on anything other than the fact I have no self-control, sign me the-fuck up.

And if wearing this mask while still having wine for breakfast twice a week makes me as hypocritical as the people who take handicapped scooters around Disney when their only handicap is too many churros, then so be it.

This is an age of kicking blame down the road like a rusty can, so if medical science doesn't have the balls to tell me to mix in a salad every now and again, I will take their nocturnal aqualung technology and run with it.

Plus, the technology has gotten much better from what I understand.

I have friends with no necks who played in the NFL in the mid-'90s who had CPAP machines that looked more like iron lungs... I think one of them had a pull-chord starter.

Whereas now, Kate told me a story of a male relative who received a late-night booty call and immediately ran out of his house to meet his paramour armed with nothing more than a toothbrush, a handful of condoms, and the petite duffel bag containing his CPAP.

Twenty years ago, you looked like Darth Vader in his sleeping pod... 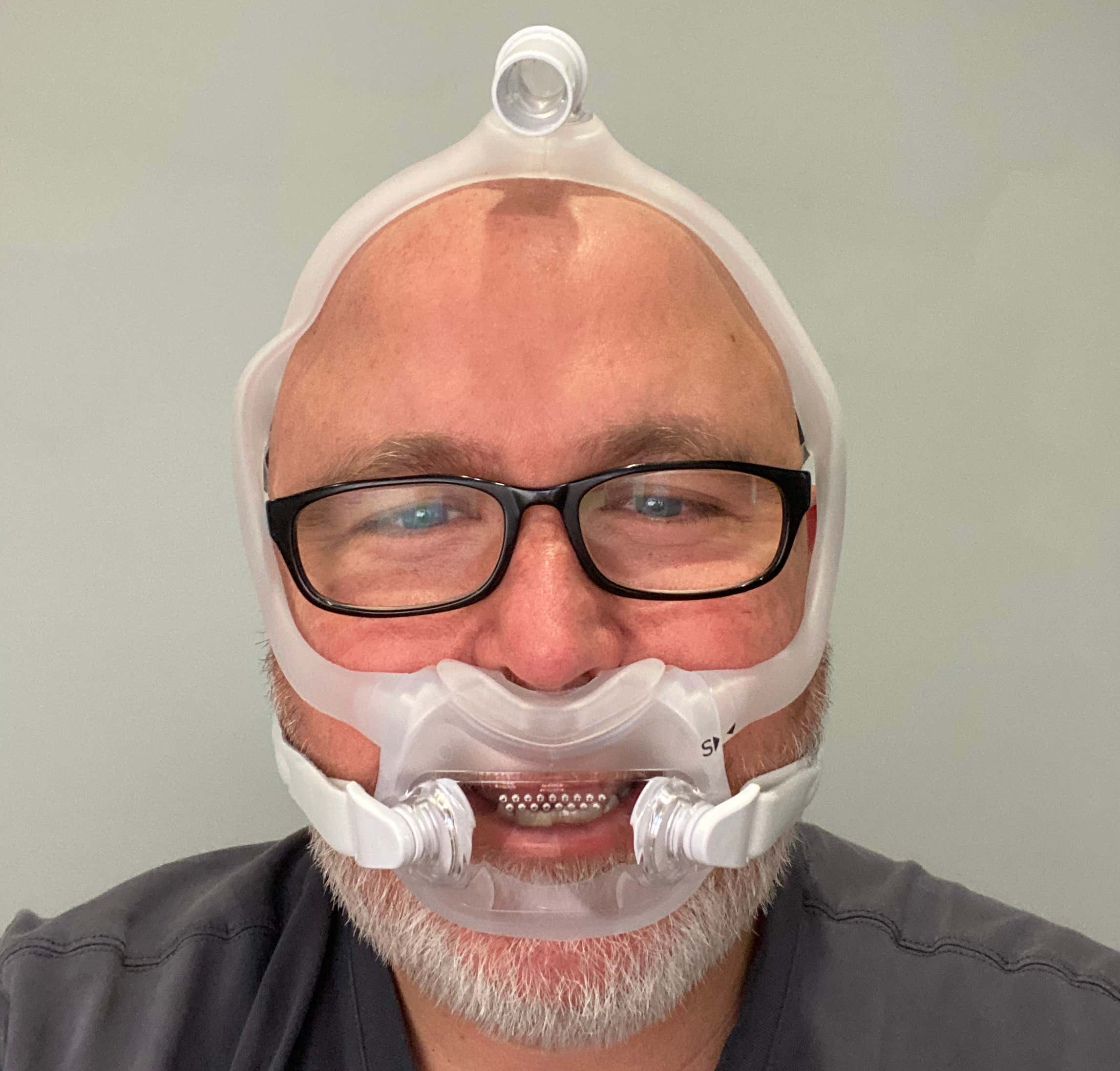 So that's it… that's the blog.

As of today, I wear a mask to sleep, and it might be exactly what I need to give me more energy during the day and more will power while at the store.

Or it will simply be the thing that pushes me into an even-earlier grave.

But at least I will fall in well-rested.