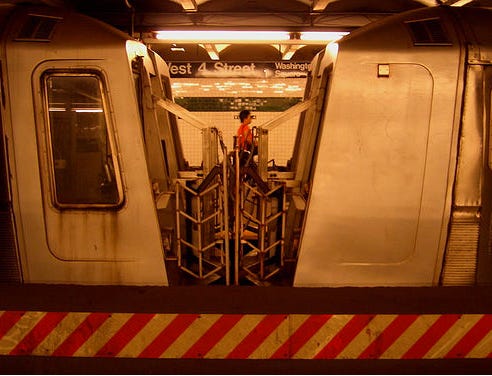 Gawker – Fifty-two-year-old Michael Kneitel is a man of principle. He will not rest until the $75 ticket he received for using the door between subway cars to escape a pissing passenger is overturned. Kneitel encountered an all-too familiar scene when he a boarded a Coney Island-bound F train this past February, he tells DNAinfo: the doors had already closed when he realized that a man, apparently homeless, was peeing in the car. Desperate, he fled to through the car’s door to the next subway car, where he was greeted by a police officer. Kneitel was ordered off the train and ticketed by the officer at the Jay Street-Metrotech station. But the peeing man, Kneitel said, “constituted an emergency” and was “hazardous to his health.” While a dubious scientific claim, allow him to explain further:

Kneitel had to have surgery a few years ago after he suffered a bacterial infection in his heart. His physician has since told him to steer clear of bacteria-carrying fluid or particles, he said.

“I didn’t want to be subjected to his urine even for one stop because you can be infected in a heartbeat,” Kneitel said.

He tried to get the ticket and its $75 fine rescinded at the MTA’s Transit Adjudication Bureau, but the officer hearing his case was not having it. “[Kneitel’s] desire to safeguard his health by separating himself from a passenger using the train car as a urine receptacle may explain his conduct, but it neither excuses it nor constitutes the type of emergency requiring immediate evacuation through the end doors to avoid imminent danger,” Rosanne Harvey wrote in her decision.

It’s also worth noting that this isn’t Kneitel’s first run-in with the law, having previously served a three-year prison sentence. From Daily Intel:

He was arrested in 2001 after an off-duty cop out for a run in Brooklyn noticed Kneitel firing a pistol at what later was revealed to be a photograph of his girlfriend’s mother. A search of his home and a storage facility turned up five rifles, 15 semiautomatic pistols, lots of ammunition, an S.S. uniform, a Nazi flag, blueprints of a vacant lot near Bill Clinton’s then-new office in Harlem, and a photo of Kneitel’s infant daughter covered in said S.S. uniform and with her finger on the trigger of a pistol.

The Nazi memorabilia, he explained to DNAinfo, “was to fund my daughter’s college fund when she got older.”

I dont care who you are. I dont care what you believe in.You could have a heart condition or a perfectly good ticker. You could be Mother Theresa or a neo-nazi skinhead. You could be Hitler reincarnate for all I care. Nobody, and I mean nobody, should have to stand around right next to a bum pissing on the subway. You should be able to walk between the cars. You should be able to break windows and crawl out. You should be able to subway surf. Fuck, you should be able to kill that homeless person right there on the spot if thats what it takes to avoid a situation where you’re trapped in a subway car with a hobo using it as a toilet. And the nerve of the fucking MTA to stand their ground on this fine. Hey dickheads, I think I’ll be the judge of what requires immediate evacuation. A Homeless pissing everywhere most certainly falls under that umbrella. You can’t go around fining someone for breaking the rules of your service when your service cant even provide subway cars that arent vagrant toilets. Fucking assholes. You stop the bums from pissing, I’ll stop moving between the cars. There’s you fucking solution.

As for the fact that this guy is clearly a Neo-Nazi terrorist with plans to take out Bill Clinton, well thats a little weird. I suppose you could make the argument that if there was one dude that does deserve to be pissed on, its him. But I honestly cant side with the MTA just being like “sorry dude. Homeless pissers are part of the territory.” The MTA is worse than Nazis.