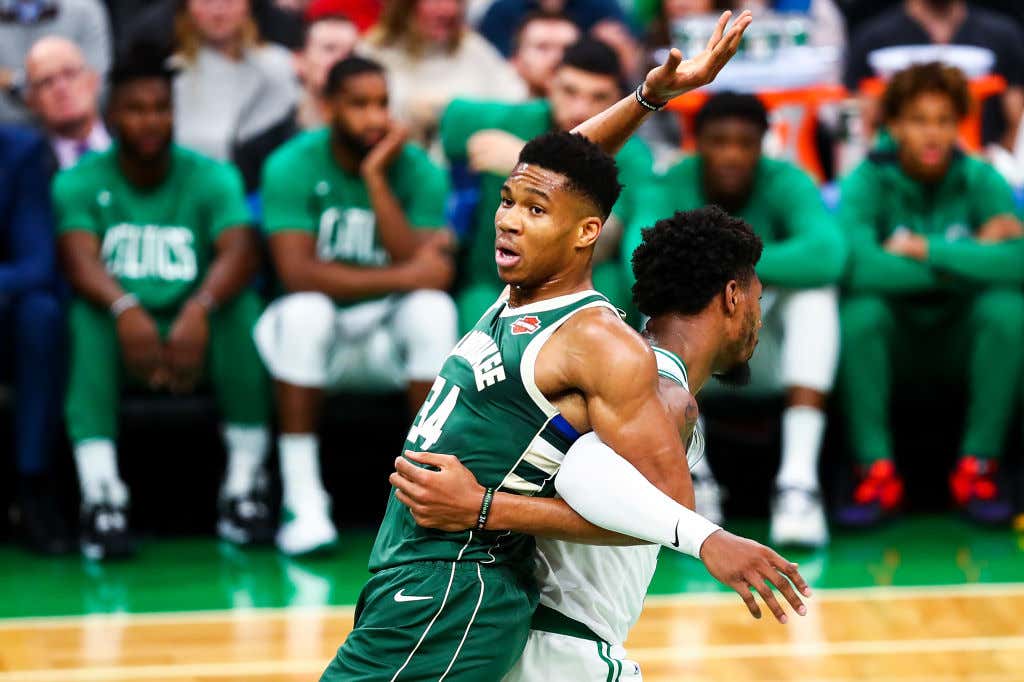 The Celtics and Bucks have a weird relationship. I wouldn't exactly call them rivals, since the post Isaiah era they are fairly even against each other with the Celts having a 4-5 regular season record and both sides having one successful playoff series against the other. The thing is, there's no denying that for the last two seasons the Bucks have been an absolute wagon in the Eastern Conference. The closer you look though a lot of their games are fairly close when the Celts star point guard doesn't quit. These two teams split their season series with Jaylen missing both games, and now this time around MIL will be missing key rotation players in Bledsoe and Connaughton. To me this is a game that means pretty much zero for the Bucks and a whole lot more to the Celts for a wide variety of reasons. A win tonight would help set the tone that Boston can run with the true contenders. This goes back to why I was excited about the 8 game schedule in the first place. I want this team to play the best of the best. I want to see where they stack up and how ready they look. If they want the hype of being a contender, earn it by executing on the court.

I'm not sure if you've seen, but the Bucks are already back to midseason form where they pretty much destroy everything in their path. Giannis is dropping 30 before even breaking a sweat. This is a team that we know loves to play fast, loves to shoot threes, and has some of the best length and defense in the league. Their historic net rating and point differential isn't an accident. So what can a fully healthy and rested Celtics team do tonight to pull this thing out? I'm glad you asked

Get off to a better start

Tell me if you've seen this before in a game against MIL. They start the game with their usual 4-14 bullshit and before they can blink half of the quarter is gone and they are already down 12. By the end of the quarter the lead is somewhere around 16, and then the Celts play MIL even the rest of the way. You should have answered yes to that question because that's pretty much exactly what happened this year.

In Game 1, the Celts found themselves down 22-10 after 7 minutes and down 34-19 after shooting 33% in the first quarter. Hayward and Kemba really struggled. Fortunately, the Celts were able to outplay MIL the rest of the way, but not before getting down by as much as 19 points

Probably the dumbest thing you can do is get down to MIL by nearly 20 points. This team is 36-7 in games decided by at least 10 points. They don't exactly make it a habit of blowing huge leads.

Which brings us to Game 2. This time the Celts found themselves down 36-20 after the first quarter after shooting 32/11%. This time it was mostly Tatum's slow start that did them in. On the other end they allowed 62/85% shooting with 6 3PM and the MIL crowd did the rest.

This time, despite a massive fourth quarter run there would be no comeback. This game was over in the first quarter.

So that's why tonight, the Celtics need to take a deep breath on both ends. We know they'll struggle to shoot early, that's fine. But their defense needs to show up as soon as the ball is tipped. Be prepared for the Lopez threes, be prepared for Giannis attacking the rim. Don't shoot yourself in the foot in the first 6 minutes like you've done in both games this season.

I can live with Giannis destroying my life. He does that to everyone and he's arguably the most athletic player in the game. Let him get his points. You know what I can't live with? The fact that Khris Middleton is so fucking unstoppable against the Boston Celtics. This isn't me saying he stinks, he's an All Star/All NBA player. But he's not 10-15 (3-6) and 8-13 (3-5) good every night like he has been in both the meetings this year. We all know about the playoff bullshit we lived through even in the series the Celts won, but for the love of god will someone make it hard on this guy. We talk all the time about the Celts wings and how they can defend the perimeter well can someone please make Khris Middleton look human. He's shooting 64/54% against BOS this year. What the hell even is that and why can it not be limited.

Find a way to score in the paint

The last thing I want this game to be is a three point shooting contest. That's not going to work out well. We know this team is at its best when they attack the basket first and find shooters once defenses rotate. Well this is where I inform you that the Bucks have the #1 defense in terms of opponents point in the paint. They challenge everything at the rim. So what I want to see this team do is not only try and attack through isolation. Give me screens give me cuts, spread everyone out and bring their shot blockers away from the rim and let's see Kemba's burst.

Don't you dare turn it over

Eric Bledsoe is one of the best defensive guards in the entire league. Not having him to go up against someone like Jaylen is a gigantic advantage for the Celts. Not to mention Jaylen has looked the best out of any Celtic so far in Orlando. So I hope they realize that and play through Jaylen a whole bunch early. If the Bucks move Middleton on Jaylen, then play through Hayward. Basically attack the shit out of whoever is taking Bledsoe's minutes.

For years the Celts are always among the best at closing out three point shooters. There may not be a more important team to do this against outside of HOU than the Bucks. Closeouts are mostly effort so I want to see if the Celts are bringing the right amount of energy and effort. When this team closes out hard and has their rotations working, this defense can clamp any opponent.

Much like LAL/LAC this game doesn't in any way determine what a potential playoff series might look like. But let's not pretend like it isn't a gigantic test for the Celts. For the Bucks, again it's mostly whatever, but after making the decision to be cautious during the scrimmages, there is no excuse for this team tonight. No rust excuse, no layoff excuse, none of that. Prove you can hang with the best of the best and let's get this Orlando run off on the right foot.