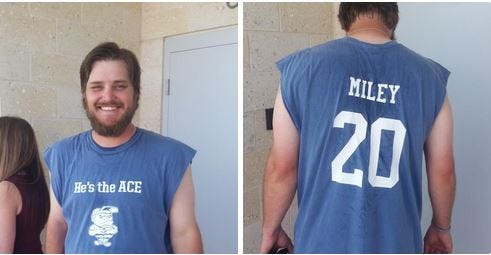 I tried to give Ben Cherrington and Larry Lucchino the benefit of the doubt when they didn’t resign Jon Lester.  I really did.  I said relax Dave.  You’re just a lowly smut blogger.  They clearly know more than you.   They must have a Plan B C and D that I don’t know about. They must know for a fact that they can trade or sign somebody else of equal stature.   At the very least James Shields and Cole Hamels were coming.  There was just no way we were going to spend billions of dollars on Hanley Ramirez, Pablo Sandaval etc and not have any pitching.  There was no way they thought you could win with a beer league softball team.  There was no way we were going to go into this season with Clay Buchholz as our Ace.  I thought it was a joke when our entire pitching staff walked around with tshirts saying “He’s the Ace” making it seem like we had five #1’s.

But guess what?  After watching this team play I can only come up with one conclusion.  Our front office doesn’t thinking pitching matters in baseball.   They just don’t.   There is no other explanation for the way this team was constructed.  It’s bananaland.  Everybody who took a look at this staff knew it sucked and guess what?  It sucks.  I just don’t get how we landed here?  It’s insanity.   How can we have the dumbest front office in the history of baseball?  I simply don’t get it.