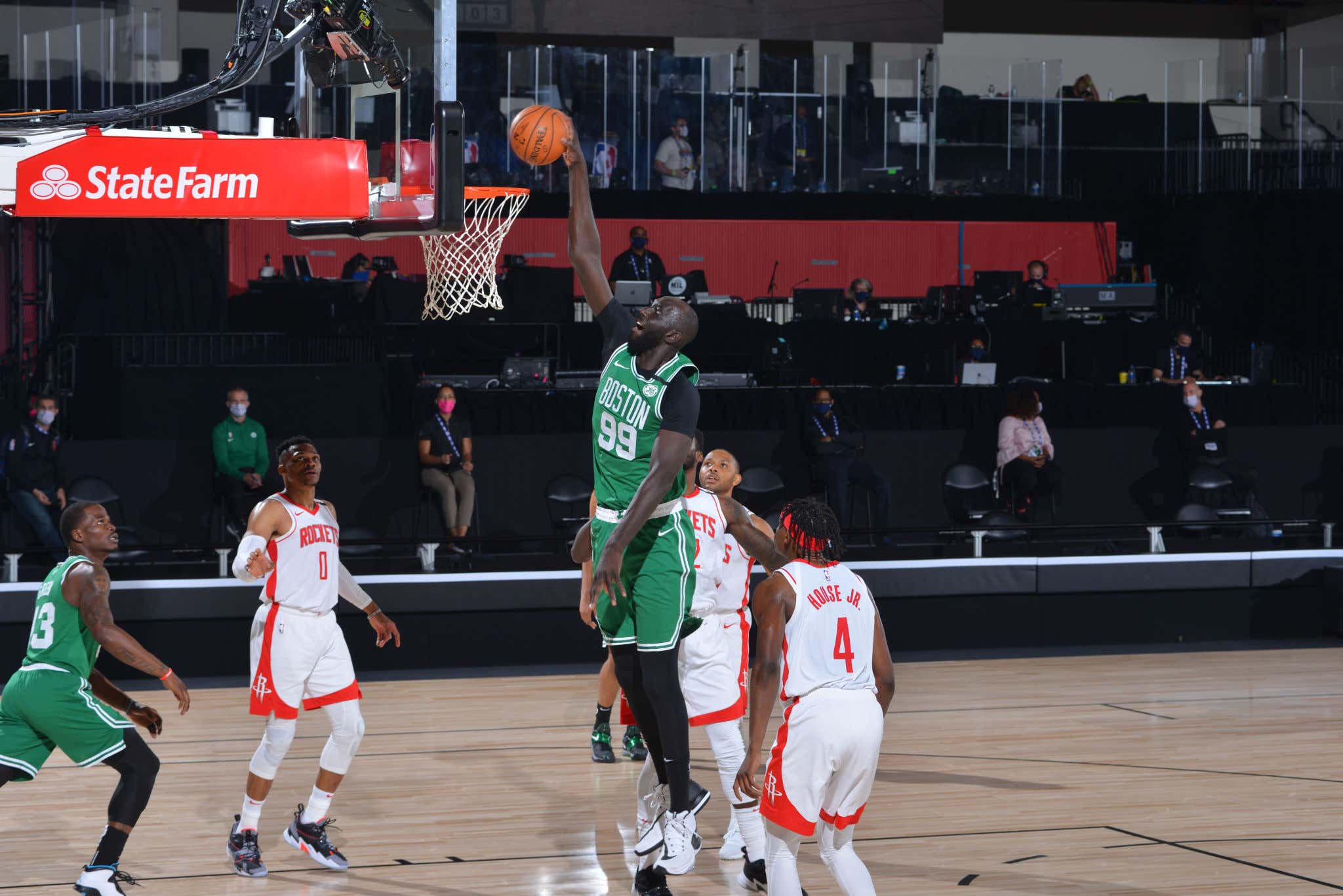 You know how I know I'm mental? No, not because I'm blogging fake scrimmages as if they were actually meaningful games, but because under any other circumstance where I watch the Celtics give up 137 points and lose by 25 and I would be rather upset. It would keep me up all night. But you know what? I don't feel any of those feelings today. In fact, I feel almost the opposite. Dare I say....encouraged? I mean look, once we knew the top 7 were getting the night off and the Rockets were playing all their normal guys, we knew the result was determined. It was more about seeing how the young guys looked against real competition and if any of them would show signs that maybe Brad should give them some rotation minutes in the seeding games maybe even a playoff series. Looking at it under that lens, it was fantastic! Way more positives than negatives in my book despite getting their doors blown off.

So now that the fake games are complete and we can shift our focus to games that actually matter, I'm going to need this team to not be giving up 137 points. But before we worry about all that, let's give the young guys their props.

- I'm just going to say it. This was the best we've seen Carsen Edwards play since last Summer League

I don't know about you but watching him play well made my brain immediately dream that he can end up being the super sub this team needs off the bench one day. They really don't have any other shooter than can get microwave hot like Carsen and I honestly don't think he's all that bad as a defender/playmaker. It wasn't just the dunk on Harden either, I mean that ruled and legit made me gasp when I saw it happen live, but his shot looked better too. I feel like everything with Carsen is a confidence thing. He sees the ball go in a few times and suddenly he becomes an offensive weapon.

It probably won't happen, but I would love to see him get some run in these seeding games. As far as I'm concerned the backup point guard role is up for grabs after Marcus Smart. If this team needs a shot in then arm offensively on the second unit, who would you rather get the run. A guy like Brad Wanamaker or Carsen? Exactly. So happy he finally played well in his opportunity.

- You know who else is going to get rotation minutes not just in the seeding games but probably in a playoff series? Grant. Goddamn do I fucking love Grant. He's a bigger Marcus Smart only now I think his three point shot is fixed and buddy does that change everything about what he can bring on that end

It's borderline unhealthy how much I trust Grant to play real minutes against pretty much any opponent. He's strong enough to bang bodies with traditional bigs, he's perfect for when teams try and play small ball, and his handle looks 100000x times better post hiatus. He even gave us a little midrange game in this one which was a welcomed surprise as well. To me he feels like the type of player who knows where to be on the defensive end, won't take shots away from other guys on the offensive end but then will also come up with huge offensive rebounds and hustle plays. That's what feeds this team. I would be shocked if Grant doesn't get the minutes as the 3rd big off the bench after Kanter. Shocked.

- It took resting pretty much the entire roster for us to get it, but we finally got Tacko minutes and boy did they not disappoint

Obviously against a smaller team like HOU he was going to be unstoppable, but seriously look at those plays and tell me why Brad shouldn't just lob it to Tacko on every play. Who is built to stop that? Not a single frontcourt in the East that's who. Tacko-Lite in PHI? No chance. Marc Gasol? On what planet. The Lopez brothers? They wish. I don't know exactly how it will unfold right now, but deep in my soul I feel like Tacko is this team's secret weapon. He's moving so much better too, you can't convince me he isn't an NBA player in a few years.

- Another strong showing for Romeo, someone who Brad already admitted is going to get a shot once the games actually count

Here's what I love about Romeo. We all know that this team is allergic to the FT line. Well in his limited action right away we see a guy who is super aggressive, understands driving angles, and is getting to the FT line. You do that and play solid defense, Brad is going to play you. If his shot comes through that's even better but for me not a requirement. His role is going to be defense, moving without the ball, cutting to the rim, and getting to the line. We saw it start to come together before the break and it's continued in his two scrimmage appearances.

you get him in P&R and he can be a real asset. I thought for the most part he did what I would expect in Timelord minutes. He rebounded well, wasn't a total disaster defensively at times, and caught lobs. Sadly I think Grant has passed him on the depth chart, but depending on matchups we could see Timelord get his run. As long as he figures out how to rotate on time, he'll get his shot.

- Javonte Green really is one of the better stories of the season. Guy came in during Summer League last year and earned his spot on the NBA roster, and honestly every time he plays I feel like he belongs

We knew he could dunk, but has anyone else noticed how much better his outside shot looks? The Celts are so loaded at wing I don't expect to see him much once the real games start, but who knows maybe there will be a Gerald Green moment where he randomly gets minutes and makes a couple threes. I wouldn't rule it out.

- That 10-0 run sure was fun to start the game. Sure things finished on a HOU 137-102 run but whatever. Those 6 minutes to start were incredible.

- Semi looks ready. I don't know what his role will be but I know that he looks way more like an NBA rotation player than I remembered.

- I think we all want Tremont to one day make this roster full time, but to do that this man is going to have to figure out how to shoot at the NBA level. He's already a tremendous passer and has quick ass hands on defense, but the shot is a problem. We get on Carsen for his struggles, well Tremont has been just as poor if not worse. He shot 3-13 (2-9) last night and that's pretty much been the story every time he gets NBA minutes. Given his size he needs to be able to come in and get buckets or things are going to be tough for him. That's why I think Carsen has the edge right now in terms of that backup role. You might lose a little in playmaking, but this second unit needs offense more than passing.

- Wayyyyyyy too much Brad Wanamaker in this game and I mean wayyyyyy too much. At this point we know what he is so when I see a game that has Romeo/Carsen/Grant etc on the floor I don't want Wanamaker going iso. I want to see those other guys touch the ball and shoot it to see if there's something there. I found that very annoying that he took the second most FGA of all the starters.

- You know what you can't do against a Rockets team playing their starters? Turn it over 21 times and miss 13 FTs. You're just asking to get blown out doing shit like that and guess who got blown out.

- It's hard to get too upset given who was active, but that doesn't mean I can sit here and pretend the defense was even remotely good. Giving up 32, 45, 34, 26 points is certainly not going to cut it no matter who is out there. Nobody and I mean nobody even came close to making things tough for James Harden who continues to torment this team. He had 30 by the half, was making ridiculous threes, the whole thing was just a disaster on that end.

- There was only 1 lead change in this game. So basically once the Rockets came back from 10-0 the Celts never challenged again. Only 2 ties too so as fun as it was to watch the young guys play, they were clearly outmatched.

- 20-8 in fastbreak points is a little concerning. Especially with MIL on deck. This is why you can't turn it over against these good teams, they'll run you out of the gym one minute and make it rain from deep on the next.

And that's it. We now turn our focus to MIL on Friday night in what is a gigantic matchup. Not in a sense that it'll determine the Celts playoff fate, but there's no denying it's a measuring stick for both sides. The Bucks are looking to remind the world that they are a historic team and should be the title favorite. The Celts are looking to make noise and prove they are contenders. I cannot wait to see how it all unfolds now that things count for real. Two more days.