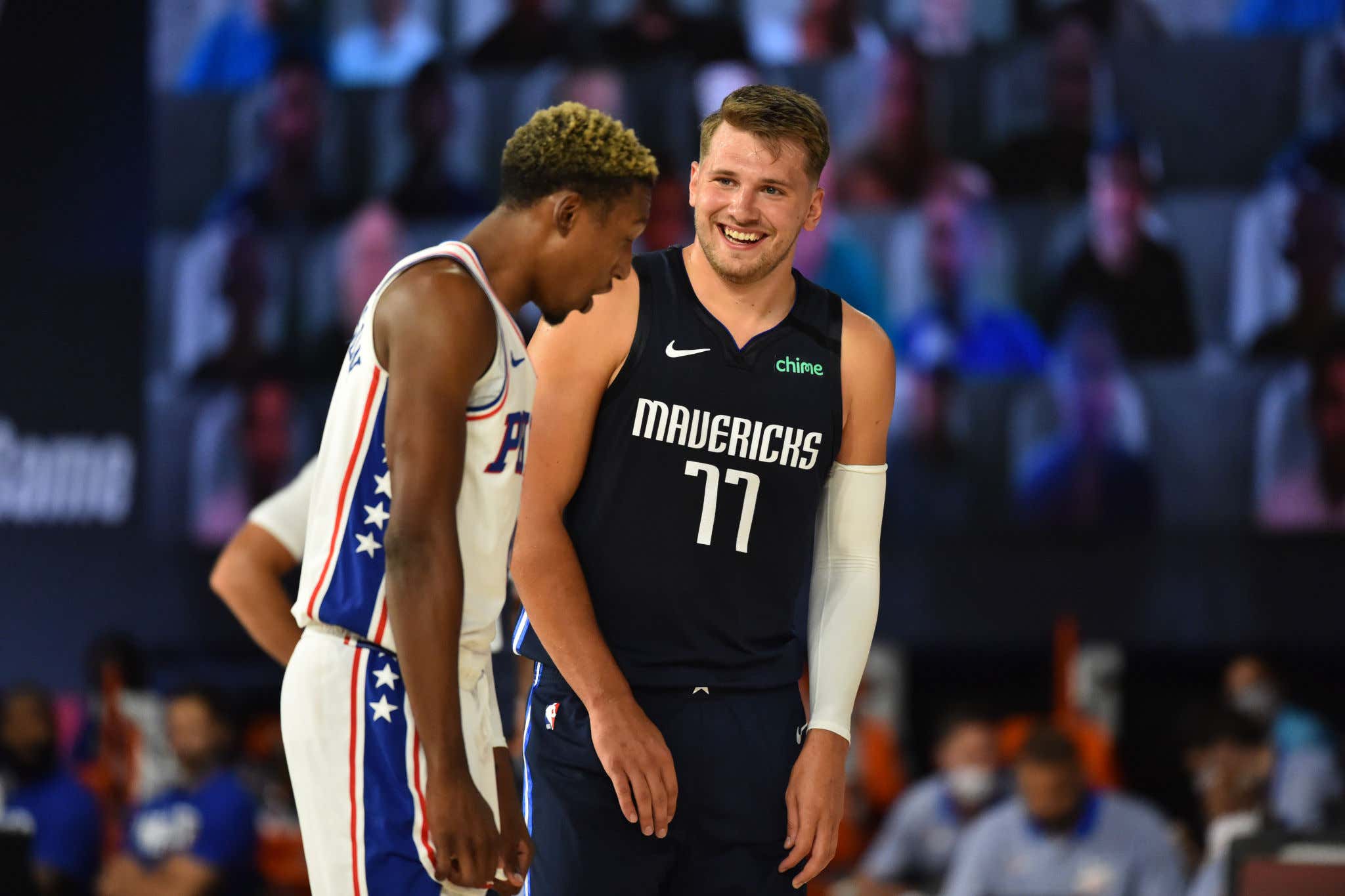 Good morning everybody happy Wednesday and welcome back to another edition of Last Night In The NBA where we bring you up to speed on everything that went down from the night before in the Association. It was the final day of scrimmages Tuesday night with a total of 6 games on the schedule and frankly not a single one disappointed. Not a whole lot of defense played by amnyone in action last night which is exactly how I like my fake scrimmages. Only one team that played last night scored under 110 points to give you an idea of what type of offense I'm talking about. If you decided to watch baseball or something stupid like that and missed the action, here's what happened.

I wrote yesterday how I was interested in seeing in the Grizzlies could show any signs of life after looking pretty terrible in their first two scrimmages, and well that's exactly what happened against the Heat. Remember there's some beef there with the Grizzlies and Andre Iguodala and you could tell MEM was locked in

They wasted no time setting the tone in this game dropping 41 first quarter points and had 69 at the break on 50/50% splits. It wasn't all positive with JJJ once again struggling from the floor (2-11), but it was pretty clear that the MEM guards were able to get whatever they wanted against this MIA defense. I think the Grizzlies needed a win like this to get the monkey off their back and now they head into the all important seeding games with a little momentum. That could be important.

For MIA, outside of Bam and Jimmy Butler it was a rough night for the rest of the roster

What makes MIA dangerous is their ability to lock you down with their zone and then their legit outside shooting. Well when the defense isn't showing up and shooters like Tyler Herro (3-13), Jae Crowder (4-10), Goran Dragic (4-10), Kendrick Nunn (2-10) all struggle, well that's how you get your ass kicked. You combine that with 18 TOs and what did Heat fans expect? The rotations were split 50/50 but the second unit really came up short offensively. If MIA is making their threes I think they can hang with almost anyone in the East, but with so many unproved playoff guys who knows what to expect.

I would have thought the Raptors would have sat everyone, but that was not the caser here. All the starters played at least 20 minutes. Things honestly weren't that bad for TOR, they finished with 45/37% splits and 16 3PM. So what the hell happened? They turned it over 28 (!!!!!!!!!!) times. Three starters had at least 3, then all hell broke loose with the second unit. I don't care if these games are fake or not, you turn it over nearly 30 times you aren't beating anyone. That felt very uncharacteristic of this group and hopefully not it's out of their system.

For PHX, I told you! This team is feisty as shit and can beat anyone on any given night. They have the top end talent and the path is there for them to at least contend for the 8 seed for years to come. Stinks they play in the West but that's life. You would think that for the Suns to pull off this upset that both Booker/Ayton went nuts, but that's not what happened at all. They had just 16 combined points. I know, makes no sense right? Well when you have Rubio/Bridges combining for 48 and making 8 3PM, that's how you get it done

I don't know if this team can snag enough wins to get into the play in, but after playing BOS tough and beating the Raptors they showed me that they are going to be a bitch to play. If you overlook this group they'll beat you.

Happy that the Spurs were finally able to get on the board before their time in Orlando is up. It won't be long now so it's good that their fans got to see some positive moments. Like Rudy Gay dropping 23 off the bench!

Then there was Keldon Johnson, a player I am almost positive you had no idea existed, he had 21 off the bench as well

Barring something insane it looks like the Spurs playoff streak will end, something that feels weird to even type.

For the Pacers, I'll say this. They never go away. Sure they may not win all the time, but they compete. Doesn't matter who is hurt or who is in the lineup, this team is not a group you just walk over. Some spotty defense after the break is what ultimately did them in, but they still had solid performance sup and down their roster

Oladipo is still shaking off some of the rust which you have to keep an eye on, but there's no reason why this team shouldn't be able to hold onto their 5 seed even without Sabonis. It'll be tougher, but we've seen this be a resilient team for almost two years now while missing key rotation players. I wouldn't rule it out.

Was there a bigger winner after these scrimmages than OKC? I mean if I were a Thunder fan my brain would be going to dangerous places. They've looked fantastic for the most part in their fake games, beat BOS/PHI/POR three teams that are getting tons of hype, and here come the Thunder just dropping at least 29 points a quarter. Chris Paul didn't even play! Didn't matter though, the OKC bench was more than capable of doing all the damage

They had 5 second unit guys in double figures, shot 51/50% with 20 3PM as a team and had they not given up in the fourth and allowed 42 points, this score would have been even worse.

For POR, I've said it time and time again. This team won't do shit if they can't defend. Now if we're being fair they didn't play Dame or CJ so their offense was always going to be an issue. But they dropped 120 points, shot 48/49% and made 19 3PM. The offense wasn't the problem

The problem is on the other end of the floor. We all thought the return of Zach Collins/Nurkic was going to help defensively, well we haven't seen any signs of that through 3 fake games. You give up 30, 33, 39 points in consecutive quarters I don't know who you expect to beat. People are starting to pick this team as a dark horse and I dunno, they haven't really shown us that they are capable of making a run just yet.

We'll talk about the Celts in their normal blog and how they looked while sitting their top 7 guys, so for now lets talk about HOU. I mean holy shit. A game like this is a great display of why this team is so goddamn dangerous. You almost just have to pray you catch them on a cold shooting night because if not, well it's not going to end well for you. This team made 23 3PM and it was all led by James Harden. The man had 30 at the half and looks very much ready to go on his title run

That Russell Westbrook guy, maybe you've heard of him, wasn't too shabby either

But what we also saw was the risk that comes with playing your main guys in the last meaningless scrimmage. Eric Gordon sprained his ankle and is going to be out 1-2 weeks. That's HUGE for the Rockets who are in a seeding battle themselves. As fun as it may have been to watch Harden turn into an inferno, my guess is Rockets fans would trade that performance in for a healthy Gordon. He's too important. That's why I thought it was crazy that Mike D'Antoni sent his starters back out to start the third quarter up a billion. Why risk it? Thankfully nobody else got hurt but man once again the Rockets get a tough injury at the worst time.

I would have thought both teams would rest their main guys in this one too and not only did that not happen for either side, but this thing actually went into OT. I didn't even know they allowed OT in fake scrimmages. With the Mavs it was the same old story of Luka/Porzingis carrying most of the offensive load

but it certainly wasn't smooth for the rest of the roster. The Mavs had their issues with PHI's defense finishing with just 40/29% splits and things almost got away from them in the third quarter giving up 41 points, but they closed strong, shot 66/50% in the OT and secured the win. If you want to talk dark horses, give DAL a look.

For PHI, no Embiid which obviously is a factor, but this starting unit was supposed to be the most talented in the NBA I keep being told. Well, they did not have it on the offensive end in this game. Ben Simmons went 2-10, Horford 6-15, Richardson 1-7, Shake Milton their savior went 2-5, Korkmaz 3-12, Mike Scott 3-11, just tough shooting all around for PHI. It looked like maybe they were making strides with that after their first scrimmage, but the last two not so much. Good night for both Tobias Harris and Thybulle

but they were really the only ones. Maybe you chalk this one up to looking ahead to the restart, but if their shooting is going to continue to be inconsistent, having Embiid there to calm things down and be an automatic bucket on the block is going to be crucial.

And that's it! You're now all caught up with everything that went down last night in the NBA. We're officially on to the games that actually count starting tomorrow and man can I not wait. We did it, we made it through. Have a great Wednesday!