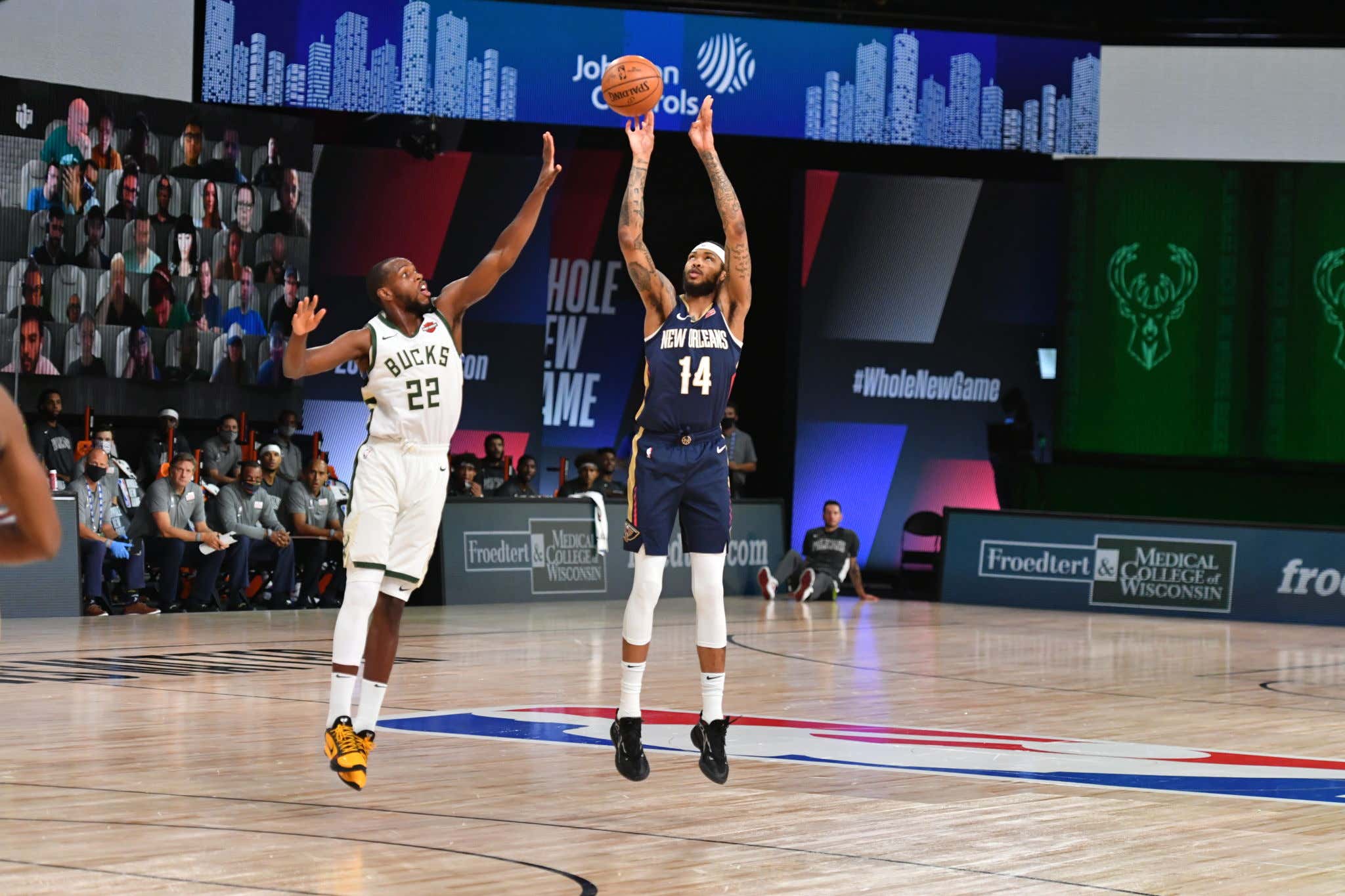 Good morning everybody happy Tuesday and welcome back to another edition of Last Night In The NBA where we bring you up to speed on everything that went down from the night before in the Association. This was the final scrimmage day for a number of teams as we inch closer to the start of the seeding games, and while some took the opportunity to rest their main guys, that wasn't the case for everyone. It was another jam packed night of 5 scrimmages, all of which were fairly entertaining. There were some surprises, some exciting returns, even some upsets. I don't know what you could have been doing instead of watching fake basketball, but if you missed the action here's what happened.

I don't think anyone expected the Lakers to play any of their main guys all that much, they gave AD/LeBron/Kuzma/Dwight the day off and frankly it was the Wizards and it made no difference. This was a chance for Lakers fans to see their new reserves get some real burn, and you may laugh but these guys are now extremely important to the success of this team. Guys like Alex Caruso, Dion Waiters, and JR Smith are going to have an opportunity to make a real impact, even in the real games. So how did they look? Lakers fans have to be drunk off the hype for sure because all three were fantastic

Dare I say the word dominant? They had 55 between the three of them, JR Smith made 6 3PM, and up until the final quarter this team didn't have a quarter under 31 points. With their bench unit. Sure it was against the Wizards who are physically allergic to playing defense, but if this happened on your favorite team you'd be over the moon. One of these guys is going to hit a huge momentum three in a playoff game you just know it.

For the Wizards, hey at least you sort of hung with a lesser version of the Lakers! That's something to hang your hat on. My guess is everyone thought you were going to get destroyed and you actually made it competitive. Congratulations! And hey, at least Rui Hachimura looked good

The Wizards time in the bubble will be coming to an end shortly, and what we've seen from Hachimura so far is definitely a positive. He's a building block for sure.

You may see that score and assume that the Clippers didn't play their regulars. You would be mistaken. Kawhi played 30 minutes (6-22, 3-13) and Paul George played 28 (5-10, 4-7). They obviously didn't have Lou Will or Harrell off the bench which is big for them, but their starters played legit minutes.

Do you think Clippers fans are talking about how poor Kawhi is shooting then ball since the bubble games started? Dude cannot buy a bucket. It won't matter all that much once the games start I imagine, but it is something to keep a mental note on. If he isn't efficient playoff Kawhi that we know and love, how does that impact their title chances? I think it's fair to say that if someone like LeBron shot as poorly through three scrimmages as Kawhi has, it'd be all we heard about.

For SAC, I feel for them. They've been hit with more injuries, things are looking pretty terrible, and then on the one night you actually beat one of the best teams in the league, it doesn't count. They even came back from 21 points!

So who played well. Bogdan Bogdanovic, maybe you've heard of him, had a game high 21

Both Buddy Hield and Harry Giles had 17

Even without Marvin Bagley this team still has a bunch on young talent which as you can see can get hot at any moment. They may not make the play in game, but I still think they can be a bitch to play if your defense starts to fall asleep.

With Bogdanovic out, a legit question for the Jazz is how are they going to replace that 20ppg production. Well, they moved Joe Ingles to the starting lineup, and on a night where their starters all played legit minutes, they pretty much had their way with the Nets defense

They got off to a 32-19 start in the first and never really looked back. Despite getting beat in the paint and on the break, and turning it over 21 times, the difference was their 13 3PM. Mike Conley won't always make 4, but finding some consistent outside shooting to replace Bogdanovic is pretty important to what this team wants to do. We know they can defend, but can they score when facing a real team and not the Nets? That's the question.

For BKN, nothing they do really matters outside of Caris LeVert, and he was pretty damn good

He finished with 23/6 on 11-22 shooting and Jarrett Allen wasn't so bad either with 19/10, but we all know the Nets are just going through the motions before their time in the bubble is over. Chances are they fall to the 8 seed and face Giannis and well…that's a wrap.

For the first time since January we saw Jonathan Isaac play for the Magic and it didn't take long for him to remind us all that he was having a breakout year before getting hurt. This dude can be a legit difference maker. The second he and Fultz came in the game the Magic went on a 22-2 run

Fultz was even making threes!!

I keep saying it, I think the Magic can surprise people in that 2 vs 7 matchup. They can take a game or two in my opinion no matter who ends up in that seed. They have legit post play, a ton and I mean a ton of length, a microwave scorer in Terrance Ross, a legit shooter in Fournier, the piece are there. For them it just comes down to defense.

For DEN, this was their chance to also see a guy with all the potential in the world play in MPJ and he did not disappoint either

You can't tell me a healthy and impactful MPJ isn't huge for the Nuggets. If Mike Malone finally gives him consistent minutes, MPJ brings an interesting dynamic to the Nuggets rotation. This team is already deep as hell, but if they can add some high lottery production to the mix? That's encouraging.

Skinny Jokic has been a bit of a turnover machine which I didn't really see coming, and Jamal Murray looks pretty good since he came back, so the Nuggets are definitely interesting. Losing to the Magic isn't exactly great when all your main rotation guys outside of Gary Harris and Monte Morris played, but there are reasons to still be excited as a Nuggets fan. This team has talent like you read about.

OK I don't care what you say, nobody saw the Pelicans being this good this quickly, especially with no Zion. I know it's a fake game but come on, they've looked great in all three of their scrimmages, this time taking down a team that barely loses. Sure it may take making 17 3PM just to have a chance to get by MIL, but the Pelicans shooting showed up in a big way

That JJ Redick run in the third quarter is what turned it, and the Pelicans have to be feeling pretty good about themselves and their chances of making that play in game. Remember, they are adding ZION WILLIAMSON to this mix. If they can defend at an acceptable level it's time to take this team seriously.

For MIL, once again Giannis had more points than minutes played. This is one of the most ridiculous things about watching this season. I cannot remember someone doing this as consistently as Giannis. Guy had 30 points in 21 minutes, what the fuck even is that

Outside of him the rest of the Bucks struggled, finishing just 39/26% with 21 TOs on the night. They allowed 74 points in the second half which isn't very MIL like, but they are still the title favorite and an absolute wagon so it's mostly whatever. I say let the Pelicans have their moment.

And that's it! You're now caught up with everything that went down in the bubble last night. We're back today with 5 more scrimmages in what is the last day of fake games, and then things start for real on Thursday. Have a great Tuesday!