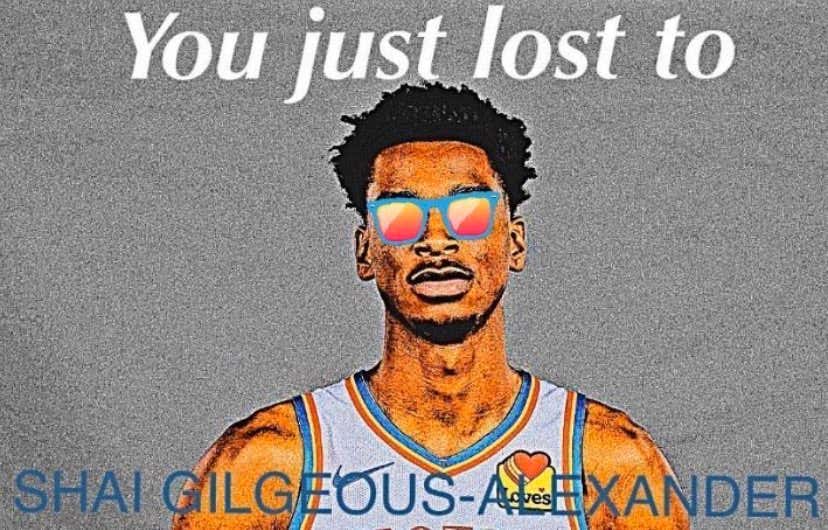 I won't sit here and pretend I'm an expert on Thunder Twitter, but I came across something after the Celts/Thunder scrimmage that I have no choice but to respect. There are a lot of reasons to be excited as a Thunder fan right now, they basically surprised everyone this year and are legit good. CP3 looks better than ever and SGA is a bonafide stud. Why can't they be a problem in the playoffs? Well you better hope your favorite team doesn't lose to this group because if they do, be prepared to be meme'd to death.

As someone who is a card carrying member of Celtics Twitter, it's impossible for me to not love a good meme and I learned that it doesn't matter who it is, whoever the Thunder beat their fans immediately take to Twitter and unload the clip. Here's what it looked like against the Celts

and on and on it went. There had to be hundreds of these things under that Celts tweet. I had no idea this was even a thing so when I asked if this is just what Thunder Twitter does to everyone I was informed that this is their thing. Doesn't matter who it's against, you lose to OKC you're getting meme'd. Period. As someone who loves a good terrible basketball meme I loved these. You have to respect that level of commitment. When I say this consisted of every single reply, I'm not kidding. You scroll and scroll and it's nothing but Thunder memes. That's how you internet in 2020.

Well yesterday they played the Sixers and for the most part got crushed. But then PHI choked away a 24 point lead which meant they had to tweet out this

and right on cue, you knew what was coming

Now I can say this with experience, you knew Sixers fans wouldn't take kindly to this. They are very insecure when it comes to their basketball team. You saw a bunch of replies like "yeaaaah well the starters killed you guys!" or "Shake Milton > SGA" because they are incapable of just having fun on Twitter. Not once did I even consider getting triggered by Thunder Twitter blowing up the Celts tweet. I understand it's all in good fun. I respect the move. Sadly Sixers Twitter didn't react the same. I dunno, maybe don't blow 24 point leads if you don't want to get meme'd to death.

All I know is I'm now rooting for OKC in any game that isn't against the Celts. I love this move and frankly am a little jealous. There's nothing better than when a collection of strangers join forces on the internet to hilariously meme. It's what makes Weird Celtics Twitter so much fun to follow and we don't even have a move like this. So I tip my cap to Thunder Twitter, I didn't even know you were a thing until about 4 days ago but I like the cut of your jib. There's something about scrolling under these box score posts and seeing nothing but ridiculous memes no matter how far down you go that just works for me.

I don't know how this impacts their title chances, but by my calculations it sure can't hurt. The bubble is weird and who knows, maybe a player will start to get tight in a close game because they know the memes are coming if they don't come through. That's the type of mental warfare that can really potentially change a bubble series. You can't prove to me it won't.