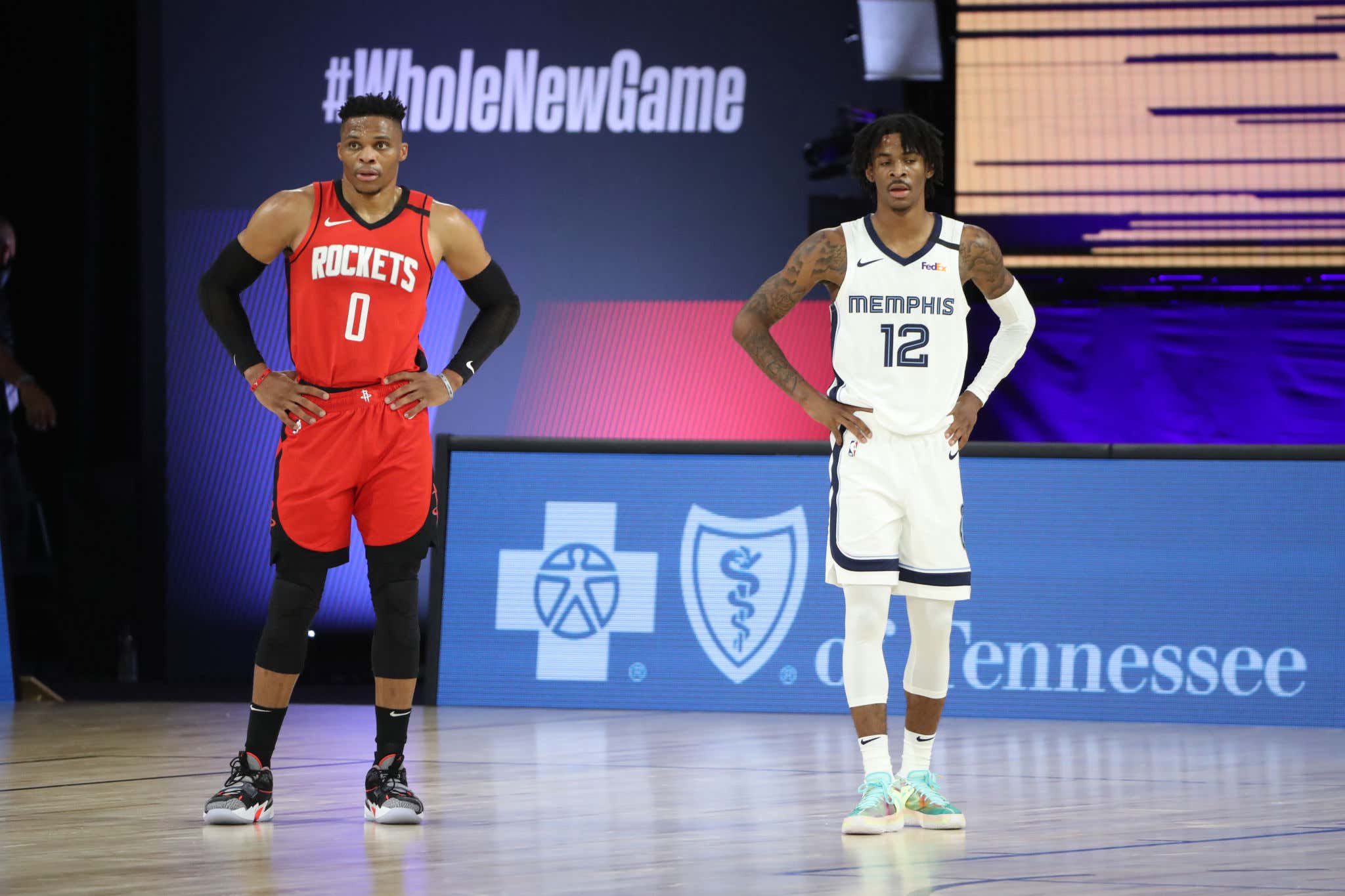 Good morning everybody I hope you had a great weekend and welcome back to another edition of Last Night In The NBA where we bring you up to speed on everything that went down from the night before in the Association. Sunday was a pretty full day of scrimmages with 5 legit matchups that gave us a little bit of everything. There were massive blown leads, some great individual performances, and some surprise results after about a week's worth of scrimmages. Now I understand it's summer and some of you didn't want to waste time being inside watching fake games so if you missed any of the action here's what happened.

We learned before this game started that Embiid would be sitting out due to a calf issue, and while that might scare some Sixers fans I'd chalk it up to a non issue. If any of these main guys feel even the slightest bit off, you sit. I imagine if this was a playoff game, we'd get Embiid. Frankly it didn't even look like they needed him given how this game started, especially the play from Al Horford. He came out firing in the first quarter and made three 3s and really carried their offense to start.

From  there, Ben Simmons pretty much took over

another massive 14/11/9 for Simmons, he looks about as ready as anyone in the bubble. Now that he's healthy he's showing to be a matchup problem playing the four. He's still guarding perimeter players on the defensive end, and opposing bigs are just too slow for him on the other. Even without Embiid the Sixers defense looked good, building a double digit halftime lead, but then things fell apart. They played their regulars pretty much until the fourth quarter, had a lead by as much as 24, and then the final quarter happened. No starters played for either side outside of Lu Dort, and the Sixers put up 22/14% and blew the quarter 32-16, ultimately losing the game. They were without Glenn Robinson who left the game with a hip pointer, and nobody else was there to pick up the slack. Tough way to lose a game in which you were so dominant for the first three quarters, but that's why these scrimmages are weird.

For OKC, while they'll be happy to take the win, there's no denying their starters had their own issues against the PHI starters. Unlike against BOS they didn't shoot all that well, especially from their three guards. The CP3/SGA/Schroder trio combined to shoot just 10-36 which isn't all that great, and frankly I'd say Paul straight up stunk with 2 assists and 5 TOs. He hasn't exactly looked all that great in the first two scrimmages.

What was awesome though was seeing Andre Roberson AGAIN come in and make gigantic threes late in the game. This time his threes were what won it for the Thunder and if you don't love that story you are just being a hater. It was like 900+ days since he played in an NBA game and now he's suddenly a three point shooter. Pretty cool story.

We'll talk about the Celts in their normal postgame blog so let's instead focus on the Suns here. They're a feisty team that definitely has talent, they are just a little bit away from putting it all together

They actually got off to a pretty good start offensively in the first half, Ayton and Booker got pretty much whatever they wanted and it took a while for the Celts to wake up. Their issue was mostly stopping the two Jays who eventually got their shit together and then it was too much for PHX. Especially once the Celts started playing defense. But I think we've seen through two scrimmages that the Suns on any given night can hang with just about anyone. They have really good top end talent and they are young as hell, but they'll make teams compete that's for sure.

Remember when Oladipo first went down and everyone thought the Pacers were going to fall like a rock and they did the exact opposite? They were actually pretty good and a top 5 seed? Well the same shit is happening in the bubble. Now with Sabonis out I feel like a lot of people expected them to lose. Well, they're 2-0 and they just beat the best offense in basketball.

It wasn't just Oladipo either. This was the best he's looked in a while for sure, but it was his supporting cast that made this win possible

They were all really efficient, with TJ Warren shooting 8-15, Turner 5-8, and Brogdon had 17/7/6 despite his 7-17 shooting. Sprinkle in some solid second unit play and that's how you come back from an early 37-26 hole. They figured out how to tighten up their defense, dominated in the paint and transition, and stayed the course. There was only 1 lead change in this game which for us fans was fun to watch. Even if these are fake games who doesn't love a good competition?

For DAL, there was no Porzingis which obviously matters, and of course Luka was doing Luka things

and you're starting to see why the Mavs are a lot of people's dark horse. Not only does Luka look fantastic, but in a pinch they can go to Boban who never disappoints

Like a lot of West teams their fate is obviously tied to their defense, something that was average at best this year. I'd say allowing 57 second half points isn't exactly what Rick Carlisle wantw, but this team is deep and once Porzingis is in the lineup become sort of a matchup nightmare for defenses. Who do you focus on? The fact that they had the #1 offense all year isn't an accident.

No Dame for POR which is obviously a gigantic deal, but at the same time the Blazers have to make the transition from a team that everyone thinks can overtake the 8 seed and ya know….actually win a basketball game. Even if it's a meaningless scrimmage. I will say both Skinny Melo and Jusuf Nurkic look pretty good in the bubble

which is going to be important for their playoff push. I'm really intrigued by what Nurkic can bring now that he's 100%, he was a fairly important piece to their puzzle before the injury. Now we know when there's no Dame that means CJ McCollum is going to have to be a beast offensively, and boy did he reach into his bag in this one

I would say as a Blazers fan it would make me feel better to see this team play defense considering that's why they are in the position of fighting for a play in game, but at this point it's all about staying healthy. No team in the league got hit like them in terms of injuries, so as long as nobody gets hurt you count that as a win.

For the Champs, I'd say Siakam looks ready

and they used a 38-21 third quarter to get their separation and never look back. They are for sure one of the teams in the bubble that look ready, and you hope that FVV's injury isn't all that serious. If you haven't watched the Raptors play you were probably surprised that Terence Davis made such an impact, but he's been doing that shit all year. This team is deep, they have legit top end talent and a bunch of legit wing defenders paired with an elite coach. Anyone who thinks this team has no shot because they don't have Kawhi is selling them way too short.

This is pretty much life as a Rockets fan. One night you are blowing a lead and going 0-12 from three in the fourth quarter and losing. The next, you go 22-51 from three with 13 of those coming from your second unit and you're throwing up 40 point fourth quarters

James Harden is back to being the MVP caliber monster we know and love, and when the rest of this team is clicking you can see why they are so hard to beat. Math is a real motherfucker

all that with Westbrook finishing 3-14 with 5 TOs and it didn't matter. Eric Gordon went 4-13 too! On pretty much every other team in the league that's a death wish, but for the Rockets it's mostly whatever. They have other guys that can make it rain from deep and considering over half their shots were threes, some nights those shots are going to fall and there's nothing you can do.

For MEM, a tough shooting night no doubt, with 38/24% splits and 20 TOs. You don't beat HOU by missing all your shots and turning it over a shit ton. I would typically advise a team to do the exact opposite. Ja did his thing

and Brandon Clarke had his moments, but JJJ once again struggled going 3-10 from the floor. With PHI and HOU so far the Grizzlies have seen two very different styles and I would say haven't looked all that great. They were poised for the upset here until that 40-17 fourth quarter ruined everything

and it's a good reminder that this team needs to be locked in for a full 48, especially against elite Western Conference teams. The good news is outside of NO none of the teams chasing them look all that great, but it's been a slow start for MEM that's for sure.

And that's it! You're now all caught up with everything that went down last night in the NBA. We're back with another 5 games tonight with the Lakers, Clippers, Bucks, and Bol Bol all in action. Talk about star power. Have a great Monday!