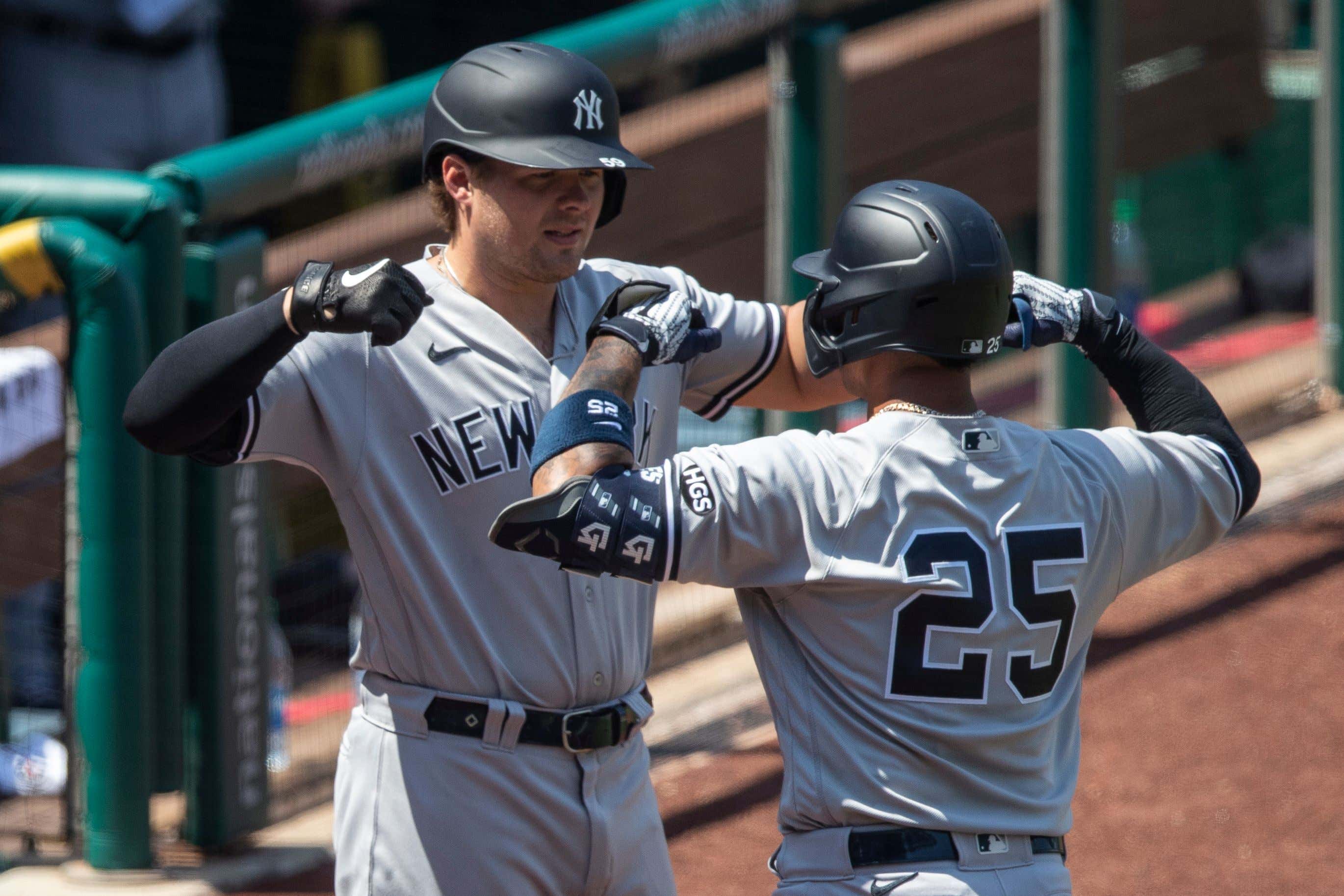 Every game is so important in 2020 where an opening series loss to anyone could be reason to panic. It sounds dramatic, but you need to start off on the right foot this year and build early momentum. This ain't a marathon, it's a motherfucking sprint. The Yankees were 9 outs away from a questionable 1-2 start. To that point their lone bright spot came on Opening Night which was followed by two flat performances by the offense. Patrick Corbin was carving up the New York hitters with his slider and the offense had no answers. It seemed like two runs were going to be plenty enough for the Nats to hold on and get the W. That's when Gleyber Torres decided he had enough. This actually was the hardest hit ball in his career.

Luke Voit has had some bad at bats to start the season. Now for sure it's early, but with Mike Ford swinging a good bat from the other side of the plate you bet Yankees Twitter has been growing impatient. A tale as old as time - Voit feels any sort of pressure from the fans and delivers to shut them up.

Just like that we were tied. The offense had risen and it was up to the bullpen to hold down their side of the bargain. That they did.

Working with a full bullpen game today, Boone navigated his way through this Nats lineup and managed to only allow two runs on the day. Lasagna and Hale combined to give up those runs while Otto, Green, Kahnle, and Britton pitched shutout baseball. Green by far looked the best going two innings, only allowing one walk and a pair of Ks which ended up earning him the W.

How'd the Yankees get the lead? Who but Gleyber Torres. Did you know he's only 23 years old? He's also clutch as fuck.

Two out hits with RISP are what give me life. Gorgeous piece of hitting by Gleyber right there. I love that man.

Entering with the lead, Tommy Kahnle walked a tight rope in the 8th having to pitch around a Gleyber Torres throwing error and an Adam Eaton double to lead things off. How'd he escape trouble? He basically just threw his changeup a billion times since it's one of the best pitches in baseball. He had this thing dancing all inning.

In the 9th, with Aroldis Chapman still sidelined with coronavirus, Zack Britton stepped into the closer role to shut the door. As always with him it's never easy. After an infield single that Asdrubal Cabrera beat out by a millimeter, Emilio Bonafacio pinch ran because apparently he's still in Major League Baseball. He advanced to 2nd on a passed ball by Gary, but was later thrown out trying to steal third. Why he did I haven't the slightest clue, but thank you good sir.

It won't get talked about enough but Gio Urshela keeping the tag on Bonafacio here saved the entire game. It baffles me that advanced stats say he's a bad infielder. It legit makes no sense whatsoever. He's actually a Gold Glove third baseman. A human vacuum. Don't you ever besmirch Gio Urshela's name.

Britton got the save and gave the Yankees their first series win of the year. Just a massive come from behind victory against the defending champs. Starting off 1-2 with no Juan Soto or Stephen Strasburg in play this weekend was unacceptable. Almost as unacceptable as losing your opening series to the Orioles at home, but that's neither here nor there. Couldn't be us!

2-1 and onto Philadelphia. Sports are back.