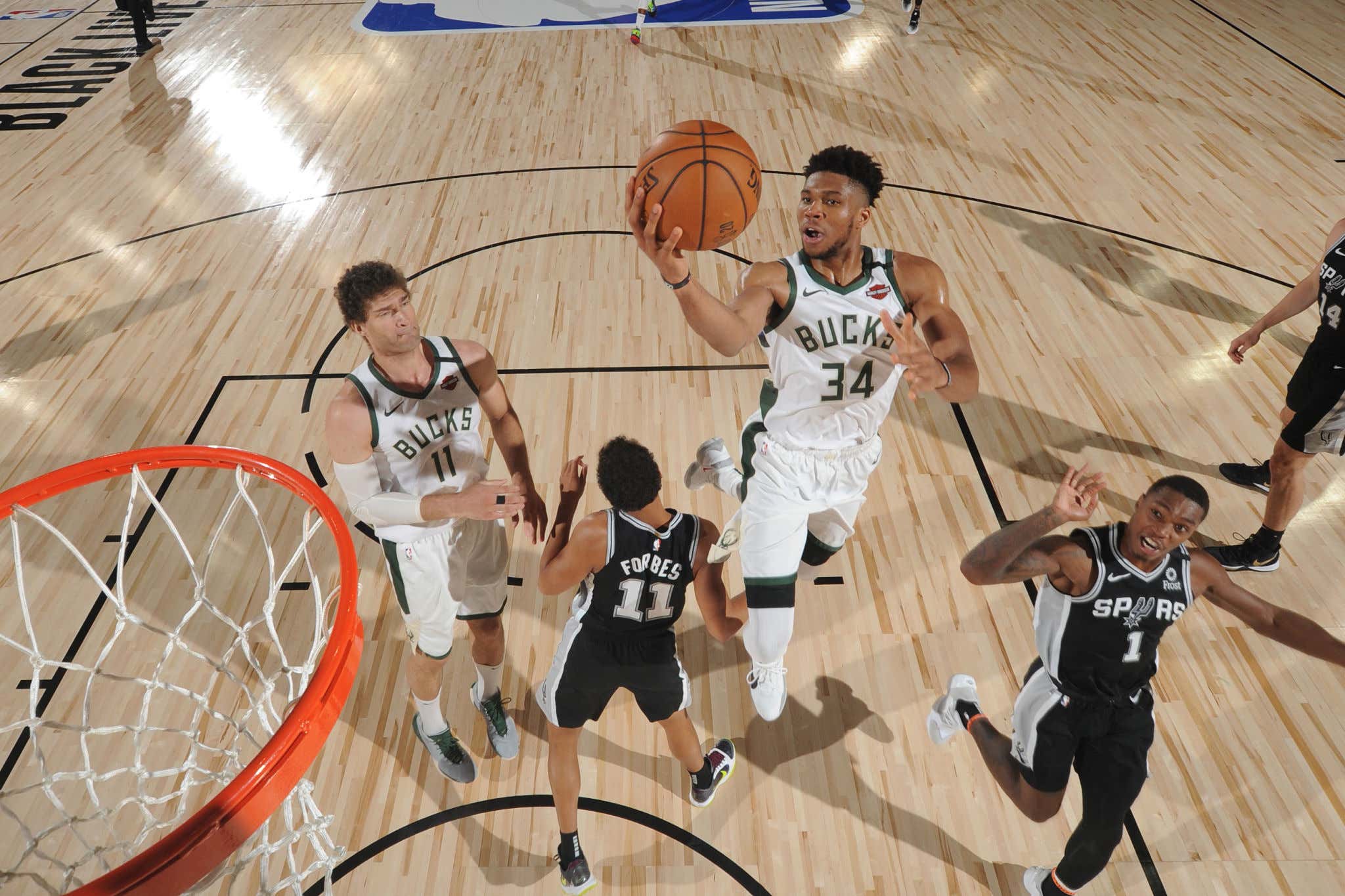 Alright welcome back to Last Night In The NBA where we bring you up to speed with everything that went down yesterday in the Association. It was Day 2 of scrimmages and frankly things once again lived up to the hype. Thursday was our first look at a couple of MVP candidates, some dark horse playoff teams, and I have to admit that even though my brain knows these games mean nothing my heart is full of joy. After so long you forget just how awesome it is to watch any sort of basketball, even if it's a weird Summer League-esq scrimmage. We had another 4 games on the schedule so if you were someone who doesn't have their priorities in order and watched baseball or some shit yesterday, here's what you missed.

Fuckin Giannis man. What else is there to even say? The man isn't human. I think anyone with a brain would assume that pretty much everyone would be rusty as these games start back up again. Giannis? He dropped 15 points in his first 11 minutes and is basically already in midseason form. I saw the exact same terrifying player that had his way with the entire league before the hiatus. He finished with 22 points in 21 minutes

Every single time this man steps on the court he finishes with more points than minutes played. That's not even hyperbole. He is very close to averaging that on the season (29.6 points, 30.9 minutes)! James Harden doesn't even do that. I don't know what you do with him considering now he's starting to hit threes.

You know what else is annoying? How good Brook Lope became. Not just the rim protection, but the three point shooting

He went 6-7 from the floor and it's almost like being in Disney World is a PED for him. I'm not ruling that out.

The rest of the Bucks though, there was some rust. Khris Middleton shot 4-12, the bench wasn't all that efficient and guess what the Bucks still won by 20. I'd say they're ready.

For SA, I said I was interested to see how their young guards looked and they certainly didn't disappoint with Murray/White combining for 24 points on 10-19 shooting.

What I had forgotten about was Lonnie Walker IV, so my apologies to him, but he was the best Spur on the floor for sure

he looks healthy and I can't lie, almost makes it worth it to watch Spurs games. They probably won't be in Orlando long so get your looks in while you can. Murray/White/Walker, that's the Spurs future.

Now this was a matchup I was very excited to watch simply because of how different both teams now look. The Blazers got two big frontcourt players back, there's Skinny Melo, and watching Dame/CJ is always an enjoyable experience for anyone who likes quality backcourt play. For a while, POR looked like the team we saw make the WCF, getting Nurk back was huge for them. For not playing in over a year, he didn't look half bad

But if we're going to be honest, it's going to be hard to POR to win anything if Dame is going to score 4 points and finish 1-5. I don't think we have to worry about him though. If I had to sum up the POR experience in this game, I'd go with this

Once again their defense got away from them in the third quarter where they gave up a 30 spot, and even with IND going cold in the fourth the Blazers didn't quite have enough.

For IND, I obviously wanted to see what version of Oladipo we might be getting in the bubble, and while he had his moments it's still not the same. He finished just 3-10 and have 3x the TOs than assists. The story for IND was clearly the two Holiday brothers who carried most of the scoring

and remember, both Sabonis and Turner didn't play in this game so it was important for the IND guards to produce. You don't hear a lot of hype around the Holiday brothers, but they are as solid on the wing as you can get. Malcolm Brogdon looked like the Bogdon of old now that he's healthy and TJ Warren can get buckets. I'm not saying put the mortgage on the Pacers, but I am saying they have all the tools to be a tough ass out.

You probably expect me to shit on the Lakers seeing as how they are winless in Orlando, but I'm not going to because LeBron/AD only played one half and in that half they pretty much had their way with the Mavs defense. Let me be perfectly clear here, if you plan on trying to guard Anthony Davis with any type of player that doesn't have a ton of length, you may as well not guard him. That was my first takeaway. His jumper over smaller defenders is still money. He finished with 12/5 on 4-6 shooting and LeBron finished with 12 points on 5-7 so yeah, they look ready

What we didn't know about was the play of Dion Waiters and JR Smith and how that would look, and I wouldn't fault Lakers fans for being drunk as shit on Waiters Island right now

They need these guys to get buckets, and that's exactly what Dion was put on this planet to do. They haven't really proven they've solved their playmaking issue with no Rondo, but this was about as good a debut as you could ask for from those two.

Kyle Kuzma…not so much. I'm pretty sure Luka is now that man's father.

For DAL, they had a little injury scare with Luka which was terrifying, but he's another guy that looks just like he did before the break. Watching Luka Magic is so goddamn fun

But as awesome as Luka was in this game, nothing even compares to what we got from Boban. It was my hope that we would see him play in this game and boy did he

Unstoppable in the paint, unstoppable from behind the arc, if Boban ever is able to get his conditioning under control he's the NBA's most dominant player. Prove me wrong, you can't.

I will say it's a little concerning that the defense didn't look all that good against the normal Lakers lineup, and then they did give up a 30 spot in the fourth, and ultimately that's going to decide the Mavs fate. Can they actually show up on that end and stop someone. They have the shooting and the offense, but the playoffs are all about stops.

A total of 6 Suns in double figures, they led the entire way, and just like I tried to tell you guys yesterday, the Booker/Ayton duo is going to be a problem for teams. We even ha Ayton knocking down threes!

You have to admit, that score surprised you. The best part is we live in 2020 and that's a time where Twitter accounts talk shit

Give them credit, they showed up

For UTA, this was my concern heading into this scrimmage. How the hell are they going to replace Bogdanovic's 20ppg? We know they can defend, but it's their offense that is now the biggest obstacle for them. Donovan Mitchell can only do so much by himself

Jordan Clarkson was a decent second scoring option for them, but Gobert was a non factor and Joe Ingles had a quiet 6 points on 3-9 shooting. They got off to a slow start and were never really able to recover, which is usually what happens when your second leading scorer is out

You should never panic as a result of a scrimmage game, but I imagine this was a wake up call for the Jazz.

And that's it! You're now all caught up with everything that went down yesterday in the bubble. We're back today with Day 3 and three more games including three teams that all think they can come out of the Easy. With MEM/PHI, OKC/BOS, and HOU/TOR today is shaping up to be another fantastic day of basketball. Happy Friday!