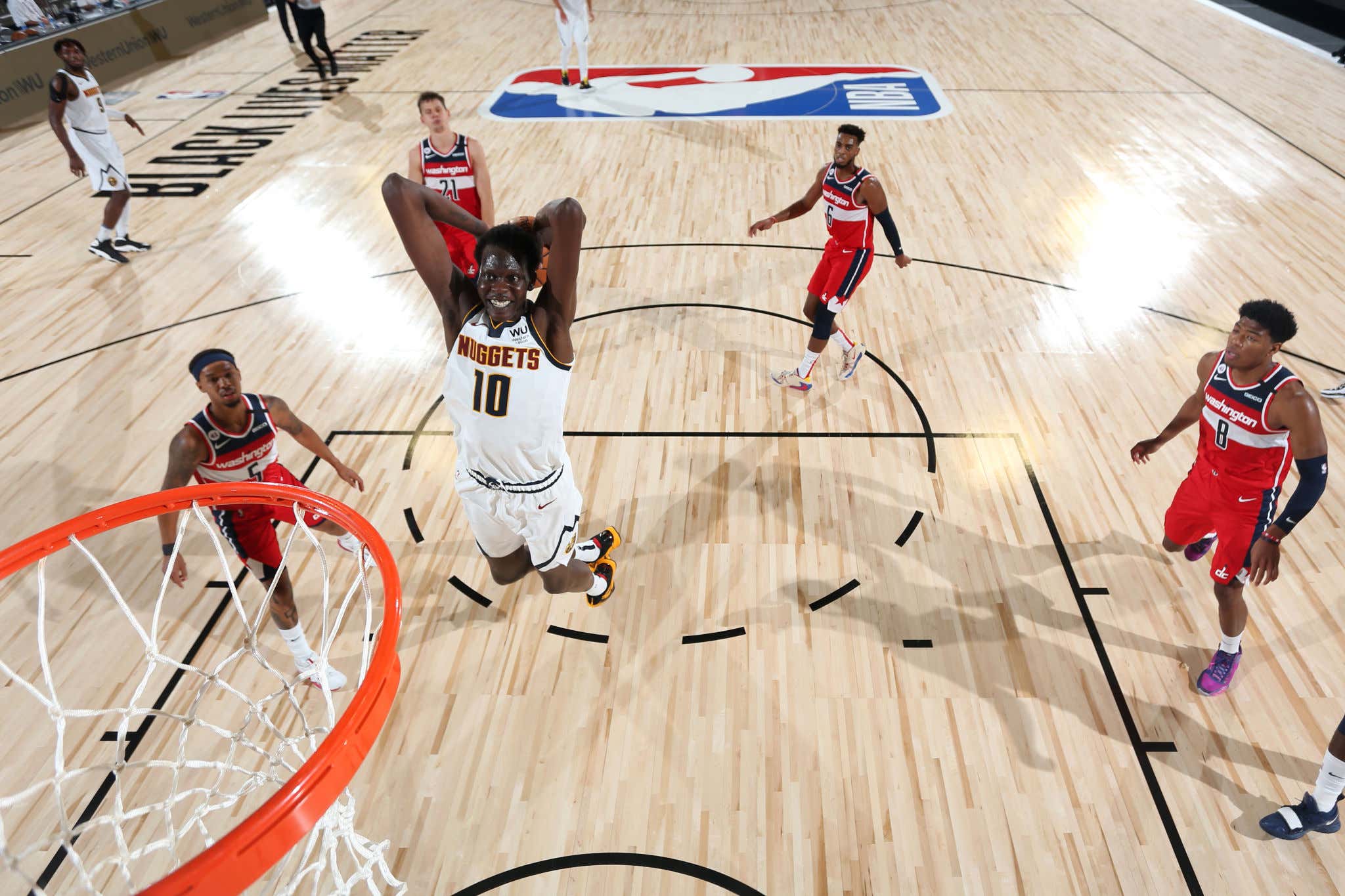 There's really no other way to start this blog other than to say welcome back. We're finally here. It's been since March 12th that we've done this blog and boy does it feel great to be back. This is by far my favorite blog to write every day because it reminds me why I blog in the first place. It's not to become some giant internet personality (lol), but because I know that somewhere out there a stoolie is sitting in his cube looking for anything to distract him from doing work. I was that guy. Maybe you think this is just a recap blog where I do nothing but post highlights. You'd be correct. That's the point. You can hate every word I ever write, but while I have your attention I want you to know that you can always rely on this blog to take up a chunk of your morning with some sweet sweet basketball goodness. Basketball highlights are awesome and it's what I used to kill time during day when I was living that cube life. So this blog is for you all, and always will be.

Now, if you were somehow distracted and missed all the action from yesterday, here's what you missed

I think we were all eager to see what the Clippers looked like even without Montrezl Harrell and Patrick Beverley not being in the bubble, and if you're a Clippers fan you woke up today feeling pretty great. Guys like Kawhi were OK, nothing special, you like thta he made three 3s and didn't get hurt. The story with them was the play of Paul George and Lou Williams, both looked to be in mid season form already

No Beverley, no Harrell, no Shamet, no Zubac, this was a great example of the Clippers depth and why they are a true contender. It's not just their top end talent, but they are a legit 10 deep. In terms of first looks, it's hard to hate how the Clippers came out.

For ORL, they are such an intriguing team to me. They don't really defend which is an issue and why they are fighting for the 7th seed, but there is talent on this roster. They come off as a team to me that is capable of beating anyone in the East on any given night. With guys like Aaron Gordon, Nikola Vucevic, MCW, and Terrance Ross all playing well they can get you from a variety of different ways

People don't talk enough about Terrance Ross off the bench in my opinion. He's as legit a scorer as anyone and if they are going to get this type of play from MCW well that would certainly be nice. We didn't see Fultz which was disappointing, but this team just strikes me as someone who surprisingly wins the first game of a series and makes the 2 seed actually have to try. The Gorodon/Vucevic front court can hold its own on the block and on the glass, and if Gordon is going to be able to make threes, he can be dangerous.

The problem was a tough second quarter which allowed LAC to take control, but other than that they pretty much played LAC even. That was impressive.

Heading into the scrimmage the only thing I was really interested to see with the Wizards was the play of Rui Hachimura. He's a guy who was having a solid ass rookie season before his injury and didn't really get all that much hype. Well, he's healthy now and looked great with his 18/9 in 26 minutes

Unless you're the family of Troy Brown or Ish Smith, there's really no other reason to watch this team play. They won't be in ORL very long but Hachimura looks every bit to be the stud that this team will need him to be moving forward. To the Wizards credit they did keep this close until late in the fourth which was certainly not something I saw coming, but then their inability to defend which we saw all year came back and well, you know what happened.

For DEN, they are the clear winner of Day 1. Has to be. When you have Bol Bol coming out and taking over the world there's really no other choice

I think the fact that this was one of the early games helped make this go so crazy because we were all foaming at the mouth for basketball. It felt great for NBA Twitter to all rally around Bol Bol. Felt like this quarantine was maybe worth it. But this was also a chance for us to see Skinny Jokic, and the results were mixed

he did have 8 TOs which isn't great, but he also gave us one of the funniest pictures of the bubble so far after one of his TOs 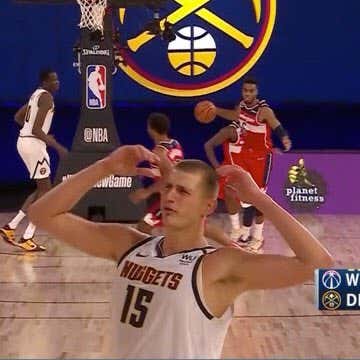 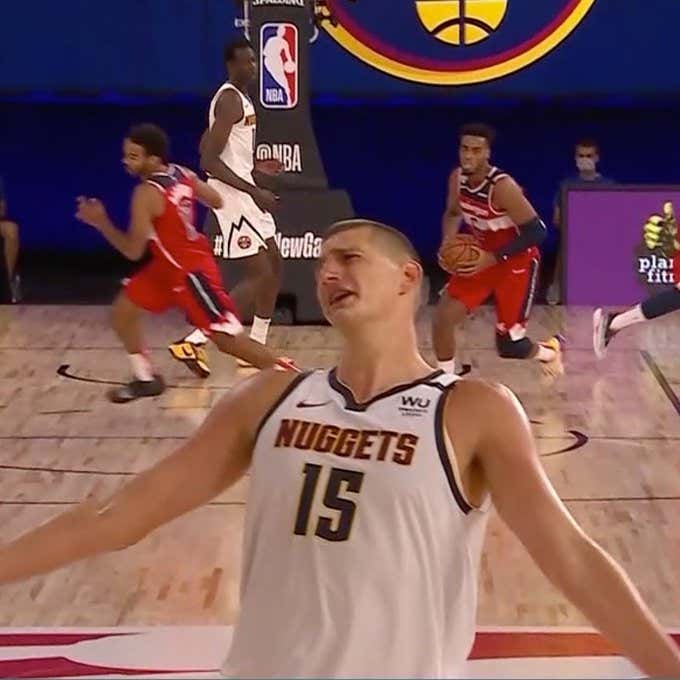 That doesn't even look real, but it is. Fantastic.

Troy Daniels led all scorers with 22 with 4 3PM, and considering the Nuggets were without Will Barton, Torrey Craig, Gary Harris, Monte Morris and Jamal Murray, basically their entire team, they were still pretty good. They are another team that is deep as hell, I think they have like 7 or 8 players that all average at least 7 points a night. A healthy DEN team should probably warrant a little more hype.

I'm sorry, the score was what? 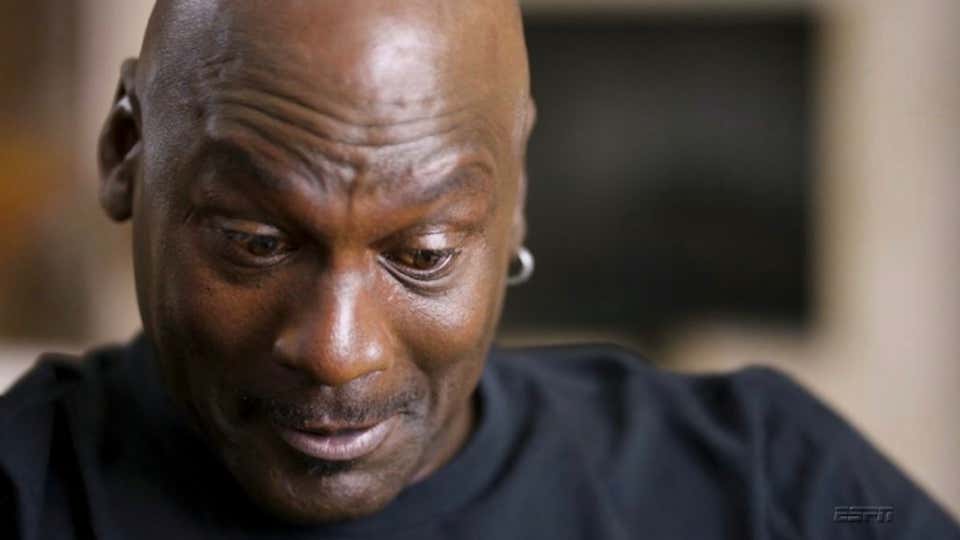 Christ Brooklyn have some goddamn pride. I don't care what your roster looks like, how are you going to lose by 31(!!!) in a scrimmage? I didn't even know that was possible and yet here we are. We all know they are in the bubble for a cup of coffee but sheesh. Caris LeVert put up a 5-18 performance which certainly isn't great seeing as how he's their only real option, and Jamal Crawford didn't even play. What the hell was that, he's the reason anyone is even tuning into this disaster of a team play in the first place. I feel bad because Nets fans out there need some sort of positive moment right now, so here you go I guess?

For NO, now this is what I want to see from a team that is hungry to make that play in game. No Zion no problem because the rest of the roster looked ready. This game was never really close, the Pelicans jumped out to a 9 point lead after one and then things opened up from there and it was a 21 point game at the half.

The impressive part to me was how they looked defensively, something that is either going to make or break their postseason chances. Guys like Jaxson Hayes did his thing

and then Brandon Ingram and E'Twaun Moore handled most of the first half scoring. It doesn't look like Ingram lost all that much when it comes to his improved outside shotBut for

But for me, the most impressive Pelican had to be Jahlil Okafor. He's completely changed his inability to play at the NBA level and he looked GOOD

I have no idea if he's going to be able to be effective once the real games start, but he finished with 10 points in 10 minutes on 5-7. Why can't he give NO some second unit buckets when Zion rests?

I feel for the Kings man, I really do. Marvin Bagley is done due to his latest foot injury, De'Aaron Fox has his sprained ankle, the hits just keep on coming. On a night where there wasn't much to to talk about offensively, at least there was Buddy Hield's shooting. That's always going to be lights out

I'll give them credit, I certainly didn't expect to see them hang with the Heat for as long as they did. Credit to them for making a nice 3rd quarter run to get back into the game when they easily could have just quit once they got down by double digits.

For MIA, they are the one I was interested in seeing. We got to see their famous zone do it's thing and I think that's going to end up being a real weapon in the postseason since team's don't really prepare for it. The way they rotate and play the passing lanes is beautiful to watch. Not as beautiful as Duncan Robinson's shooting form though.

This team has shooters, good high end talent, smart veterans, and a good coach. That's usually a recipe for playoff success and I'd be on cloud nine as a Heat fan right now. Herro still dropped 15 despite going 0-7 from three which won't happen often, and they didn't have Bam or Kendrick Nunn in the lineup. Not bad.

And that's it! You are now all caught up with everything that went down yesterday in Day 1 of scrimmages. We have four more today starting at 3:30pm ET and then the Lakers/Mavs tip off at 7. Another great day of basketball is on deck and I for one am thankful. Have a great Thursday!