I hope Mets fans got a few hits of that magical Opening Day drug that every fanbase gets high off of at the beginning of every season because shit has already splattered against the fan. Just when we got over how ridiculous it was that we lost our number 2 starter to Tommy John surgery while the entire country was in quarantine, we lose his replacement behind the best pitcher in the universe two days before our season starts.

As for the timeline for Stroman's injury:

A starting pitcher missing 2-8 weeks worth of starts in a 60 game season equals...

I know that prospects in baseball are one of the most unstable commodities in sports. In fact, you can make a case Mets fans know this more than any other fanbase. But even though it's early, I'm still going to chalk up trading a 19-year-old 2nd round pick and a lefty that had a 1.49 ERA in AA before struggling in AAA for 11 meh starts of Marcus Stroman as a loss for Brodie Van Wagenen on strict value alone, even though it doesn't touch trading a first round pick to Seattle that appears to hit the ball further than Sasquatch for the worst closer in baseball last year and a dude coming off a PED suspension with roughly a zillion dollars left on his contract.

Now we just need to fill The Stro Show's roster spot, which will be tough from a performance angle but even tougher from an electricity angle.

For those wondering, yes I have already convinced myself that this will all be fine if Stroman comes back to the Mets on the cheap and we get to see Big Poppa Stro hanging out in Uncle Stevie's owners box since Steve Cohen becoming owner is more important than whatever bullshit happens on baseball diamonds over the next few months.

Damn it feels good to have the Mets back in my life. Definitely didn't miss this at all! 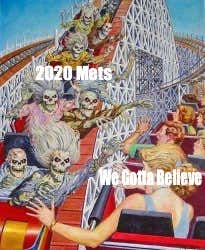