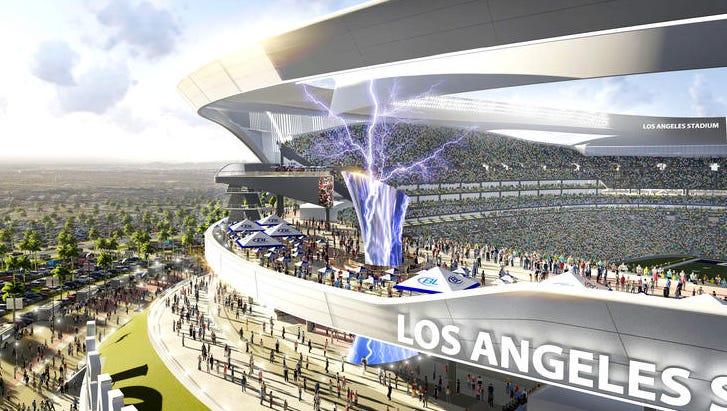 LA Times - Two months after unveiling plans and renderings for a stadium in Carson, the San Diego Chargers and Oakland Raiders have completely overhauled their design for the $1.7-billion project. The Chargers and Raiders presented their concept in New York this week to NFL Commissioner Roger Goodell and the Committee on Los Angeles Opportunities, composed of six team owners. A signature element of the design is a 115- to 120-foot tower that rises through and extends above the main concourse. It would serve as a pedestal for a cauldron that would change depending on the team. When the Chargers play, simulated lightning bolts would swirl behind glass encasing the tower and, if the team were to score a touchdown, a bolt would shoot out of the top. For Raiders games, a flame would burn in the cauldron in honor of legendary team owner Al Davis. The plan would not call for the flame to burst up from the tower in the event of a Raiders touchdown.

I’m such a sucker for new stadium porn. And this is doing it for me. A giant tower that lightning bolts will fly out of if the Chargers score? Sign me the fuck up. Really lame of the Raiders to not have Al Davis’ flame go flying out of the top when they score though. What a missed opportunity. Maybe mix the two together like an ice cream swirl and have the most bad ass pyro show since the XFL. Love what they’re doing with this. If you are going to trot out losers like the Raiders, at least make it look as sexy as possible. Al Davis’ legacy lives on.