Alright so aside from getting on him about throwing 21 interceptions and going 6-10 with one of the most talented rosters in the NFL last season, Browns fans and Twitter trolls have been on Baker Mayfield's case for a while now for being "fat" because of some unflattering photos he's posted in the past....

I'm not sure how anyone would come across as flattering in a photo surrounded by world class athletes like that, but again, Twitter went off on his Dad Bod. So much so that a new account was created: Fat Baker Mayfield. 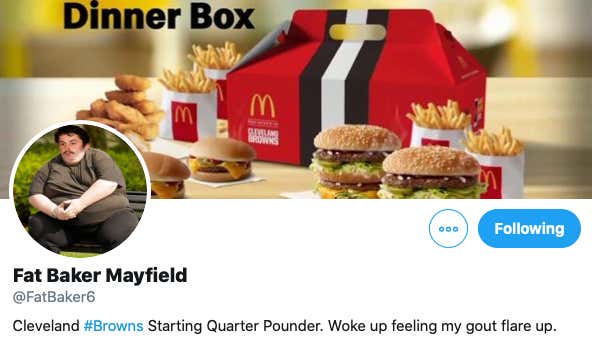 Well the motto this year is to let our work shut the haters up, and Baker's work has responded LOUD AND CLEAR. Viewer Discretion is advised when looking at this photo that dropped last night….

Oh BABY!! Speaking of babies, can you get pregnant from looking at a photo? If so, Cleveland is going to have a population boom in about 9 months. I mean, don't turn sideways or I might not be able to even see you, Baker! That dudes gotta be what, 190? Perhaps the new most mobile quarterback in the AFC North?? Time will tell. But Baker has officially passed test #1 of his new mantra this season. Now I just hope this isn't a once in a Blue Moon (stick to High Noons, Baker -- less calories) type of thing. I hope this is just Exhibit A of a long line of examples of how Baker Mayfield lets his work, not his mouth, do the talking this year. Until we start winning, then I want that mouth to never shut.