I got things rolling yesterday morning with some of the best bench clearing brawls in baseball history thanks to Machine Gun Joe Kelly coming for the Astros asses and was hit up on Twitter by a guy named Stevie Stats telling me that there was a Rangers fight better than Nolan Ryan v. Robin Ventura and Rougned Odor v. Joey Bats. And after watching the video above for the first time, I think I actually agree with him.

Some people bunt to move the runner over or to keep defenses on their toes. But Lenny Randle bunted to start a motherfucking war. I haven't seen someone run with a purpose like that since The Ultimate Warrior was sprinting to the ring with the spirit of Warrior Nation (along with other substances) churning through his body with the umpires instantly waving the white flag of maintaining any type of order. 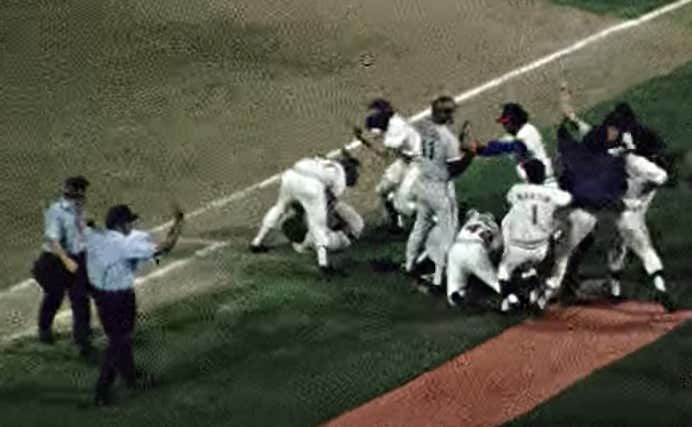 But the craziest person in the stadium that night wasn't Lenny Randle, Rangers skipper Billy Martin, or the player losing his MIND trying to get into the stands decades before The Malice At The Palace was thing (former Cardinals pitching coach Dave Duncan, which is randomly LOL funny). It's the old gentleman in a button down that calmly was asking the angry professional athletes to fight him in the stands. 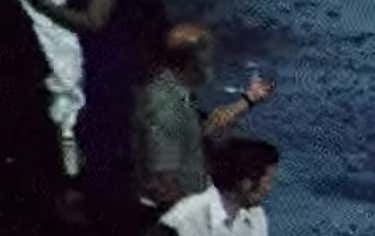 I don't know who killed JFK and would never accuse anybody of doing such a thing. But I will say this guy seems like someone that would meet in a nondescript Texas room full of older gentlemen smoking cigarettes with no air conditioning where the planning of taking down the leader of the free world went down.

A couple of fun facts I stumbled upon while researching this fight:

1. This brawl actually helped spawn the chaos of the infamous 10 cent beer night game in Cleveland.

Ten Cent Beer Night was a promotion held by Major League Baseball's Cleveland Indians during a game against the Texas Rangers at Cleveland Stadium on Tuesday, June 4, 1974.

The idea behind the promotion was to attract more fans to the game by offering 12 fluid ounce (355 ml) cups of 3.2% beer for just 10 cents each, a substantial discount on the regular price of 65 cents, with a limit of six beers per purchase but with no limit on the number of purchases made during the game.[1] During the game, fans became heavily intoxicated, culminating in a riot in the ninth inning which caused the game to be forfeited due to the crowd's uncontrollable rowdiness and because the game could not be resumed in a timely manner.

The Indians had previously held such promotions without incident, beginning with Nickel Beer Day in 1971. However, a bench-clearing brawl during the teams' last meeting one week earlier at Arlington Stadium in Texas left some Indians fans harboring a grudge against the Rangers.

After the game, a Cleveland reporter asked Rangers manager Billy Martin "Are you going to take your armor to Cleveland?" to which Martin replied, "Naw, they won't have enough fans there to worry about." During the week leading up to the teams' next meeting in Cleveland, sports radio talk show host Pete Franklin and Indians radio announcer Joe Tait made comments that fueled the fans' animosity toward the Rangers. In addition, The Plain Dealer printed a cartoon the day of the game showing Chief Wahoo holding a pair of boxing gloves with the caption, "Be ready for anything."

2. In addition to starting this brawl, Lenny Randle also punched his manager Frank Lucchesi in the face not once, not twice, but thrice times in 1977. This resulted in the Rangers suspending Randle 30 days and fining him $10,000, the good state of Florida hitting him with a $1,050 fine for battery and Lucchesi suing Randle for $200,000 after he was fired as Indians manager. Randle was later traded to the…you guessed it New York Mets for Rick Auerbach.

3. After his MLB career was over, Lenny Randle became the first American to play professional baseball in Italy and won the batting title with a .477 average. That man could hit on the field, off the field, and around the world.

4. Not as much a fact as something fun: Oscar Gamble's fro. 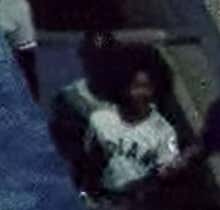