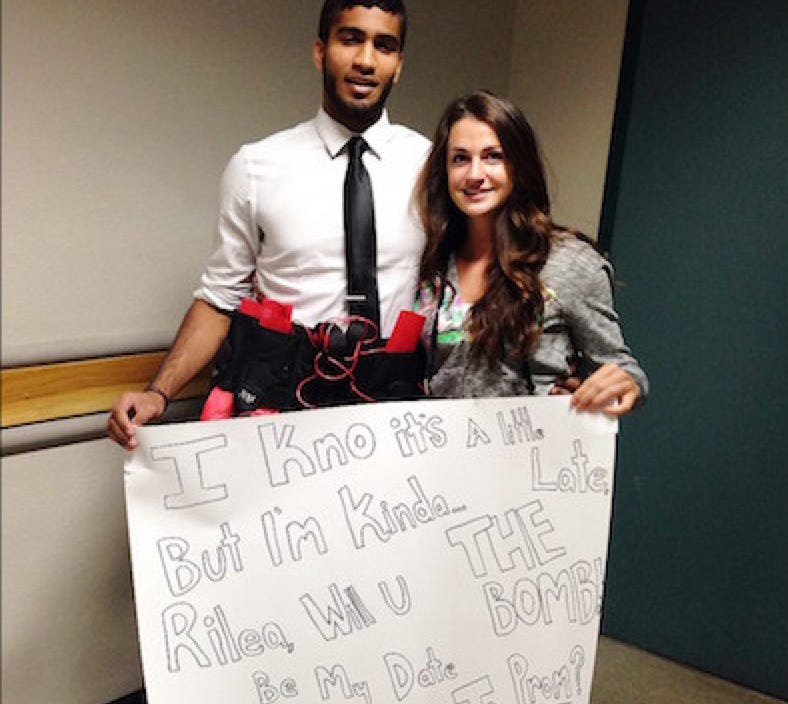 Columbian – The situation caused a short-lived scare among administrators until they confirmed the prop wasn’t a real weapon and the student, Ibrahim Ahmad, was not making threats. Nonetheless, the stunt landed Ahmad with a five-day suspension that will keep him from going to the school’s prom on Saturday night.

Ahmad said he felt pressure to go all out in asking his would-be date to the big dance.

“In ‘promposals,’ you’re supposed to go big,” he said. “It’s kind of a trending thing now, too, where everyone just asks in a really creative way.”

So during lunchtime, Ahmad strapped a paintball vest to his waist and filled the open pockets with red paper tubes attached to red wires, a prop made to look like explosives. And he stood up on the stage in the cafeteria holding a sign that read: “I kno it’s A little Late, But I’m kinda…THE BOMB! Rilea, Will U Be My Date To Prom?”

“I’m Middle Eastern, and I thought the bomb was kind of funny and clever,” he said. “I wasn’t wearing the vest for more than, like, 20 seconds. I asked her, took a picture, took it off, and then the school got upset.”

Soooo basically he got a week off school and the girl said yes. Classic high school terrorism bomb prank win-win. But more than anything, I really want to hate these prom proposals but for some reason I just can’t. The fact this kid thought a bomb joke was “funny and clever” and that chick last week shitting on some kid’s prom proposal right to his face…it’s just too much gold. And high school kids are such shameless attention whores with Snapchat and social media these days that you know it’s just going to get crazier and crazier until there are endless CNN stories about “PROMPOSALS: HAVE THEY GONE TOO FAR?” I’m excited for that. So do the damn thing, high school kids out there. Embarrass yourselves for my amusement in the name of fleeting high school love. The more insane the prom proposal the better.*

*I see no way at all this will blow up in my face when some kid does something that results in his entire school burning to the ground because he reeeeally wanted to fingerbang Becky Sislowitz in the back of a 1987 limo and thought a prom proposal involving canisters of gasoline and 700 Roman candles were somehow a means to that end.