I think this post from my associate Glen encapsulates how astronomically absurd the act of DMing is as a mode of communication. It's almost like people on social media think with a more distinguished ethical code than they DM — like the thoughts that randomly and uncontrollably pop up in their head are more appropriate and rational than the direct messages they willingly type out and send to other human beings whom they never met. I’ve shed unnecessary light on this theory in the form of four or five different Creep Olympic blogs, but that doesn’t even really do it justice. At the end of the day those messages are usually just the result of flagrant, unrequited horniness. But when it comes to gentlemen like myself and Mr. Balls, who are often receiving DMs from people who don’t desire to lie with us, where is the rhyme or reason? 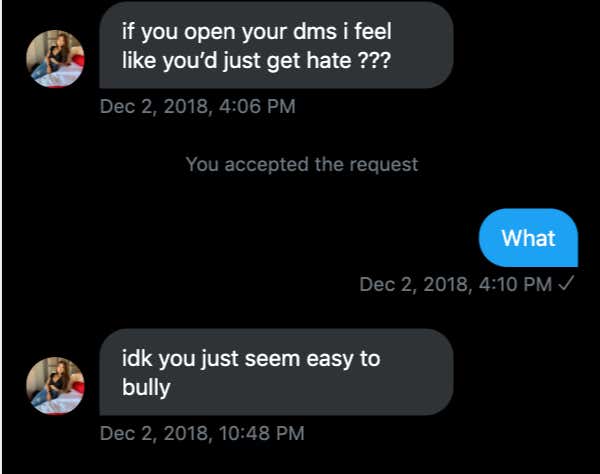 My DMs are probably the least vile and offensive out of anyone at my company, but as someone who prefers conversing with people sans faces and reality, it pains me that I can’t even turn to Twitter for a therapeutic dose of normal and genuine human interaction anymore. 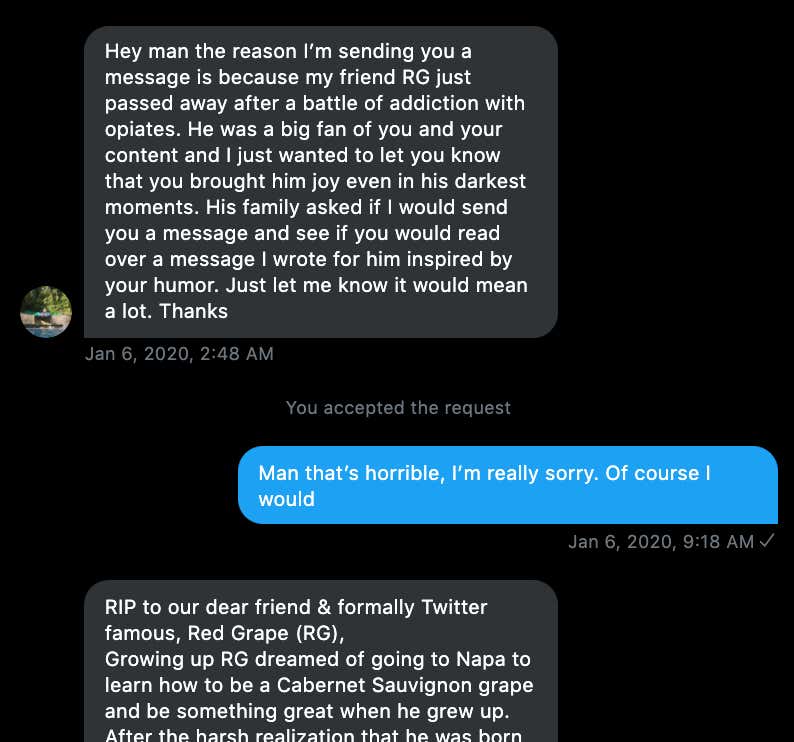 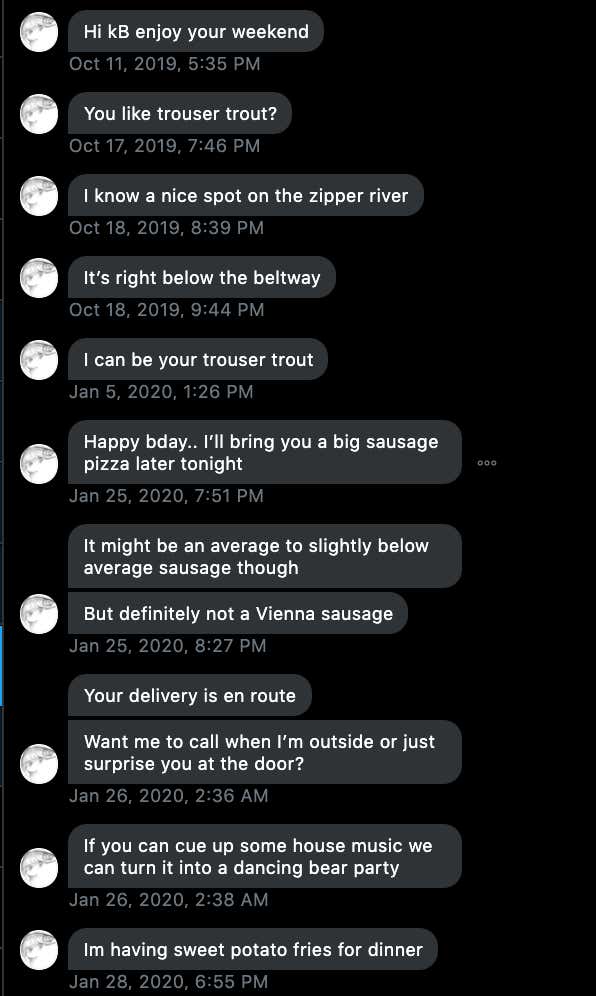 It's like he spent ten weeks self-reflecting about the failure of his "trouser trout" bit, doubled down for safe measure, and then attempted grand redemption in the form of playing some type of self conscious sexual predator character. Actually impressive. 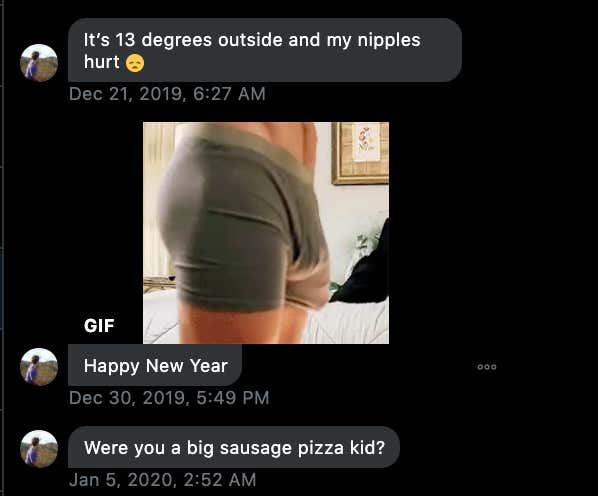 Most fellas can only handle five or six days of silent treatment before resorting to exploiting my love for cured pizza toppings, but that's besides the point. No matter how tempted I am to reply to these lads, I’ve been classically conditioned through years of exposure to impish ghouls to not even bother engaging anymore. As much as I want to interact with my followers, it’s just not worth it most of the time. 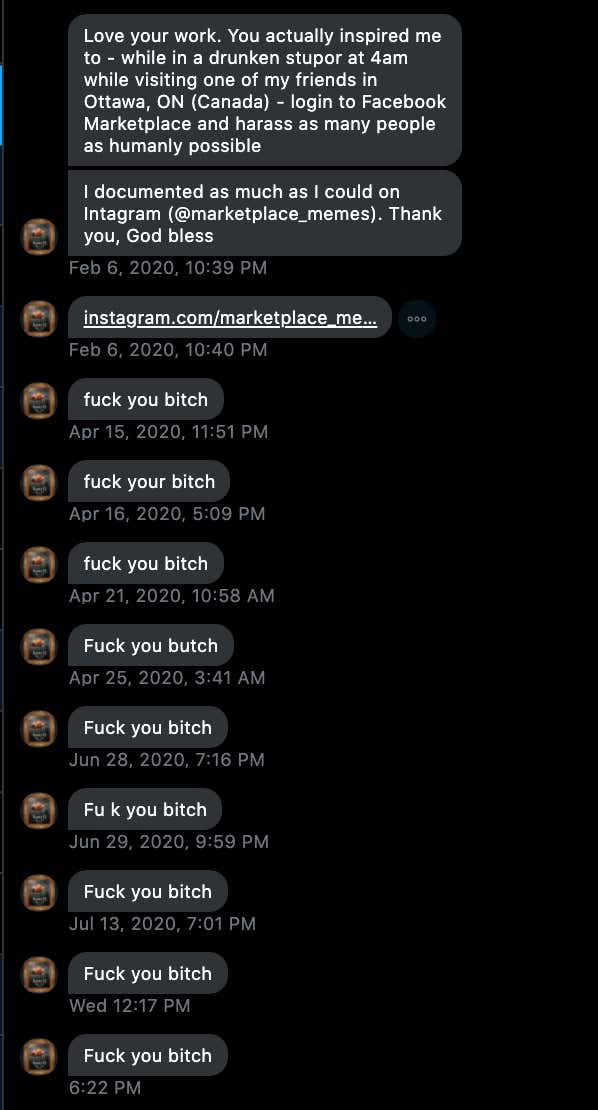 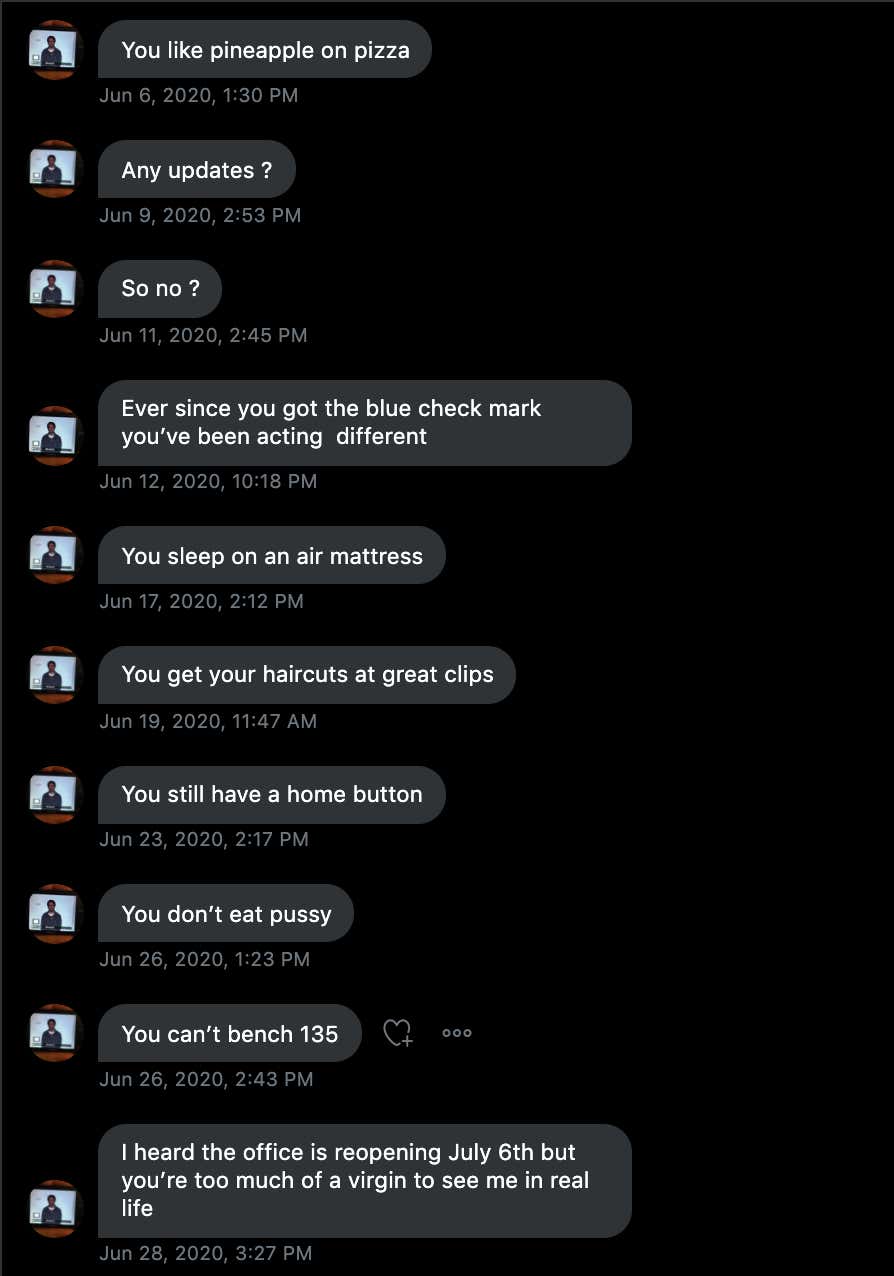 I guess the juicy, voluptuous pussy in me is tired of having my insecurities blitzkrieged by a battalion of bullies. Sue me. The big fat snowflake in me is sick of experiencing the naive excitement that comes with seeing a DM preview that says "You kinda look like Danny Amendola" and riding the high of resembling a Super Bowl-winning sex symbol who's sucked and fucked Miss Universe, only to open it up and notice that it's followed by "if his parents signed him up for an unsanctioned human radiation experiment instead of youth football." My anxiety can only handle so much. My unnaturally smooth and restless little legs can only shake so hard. 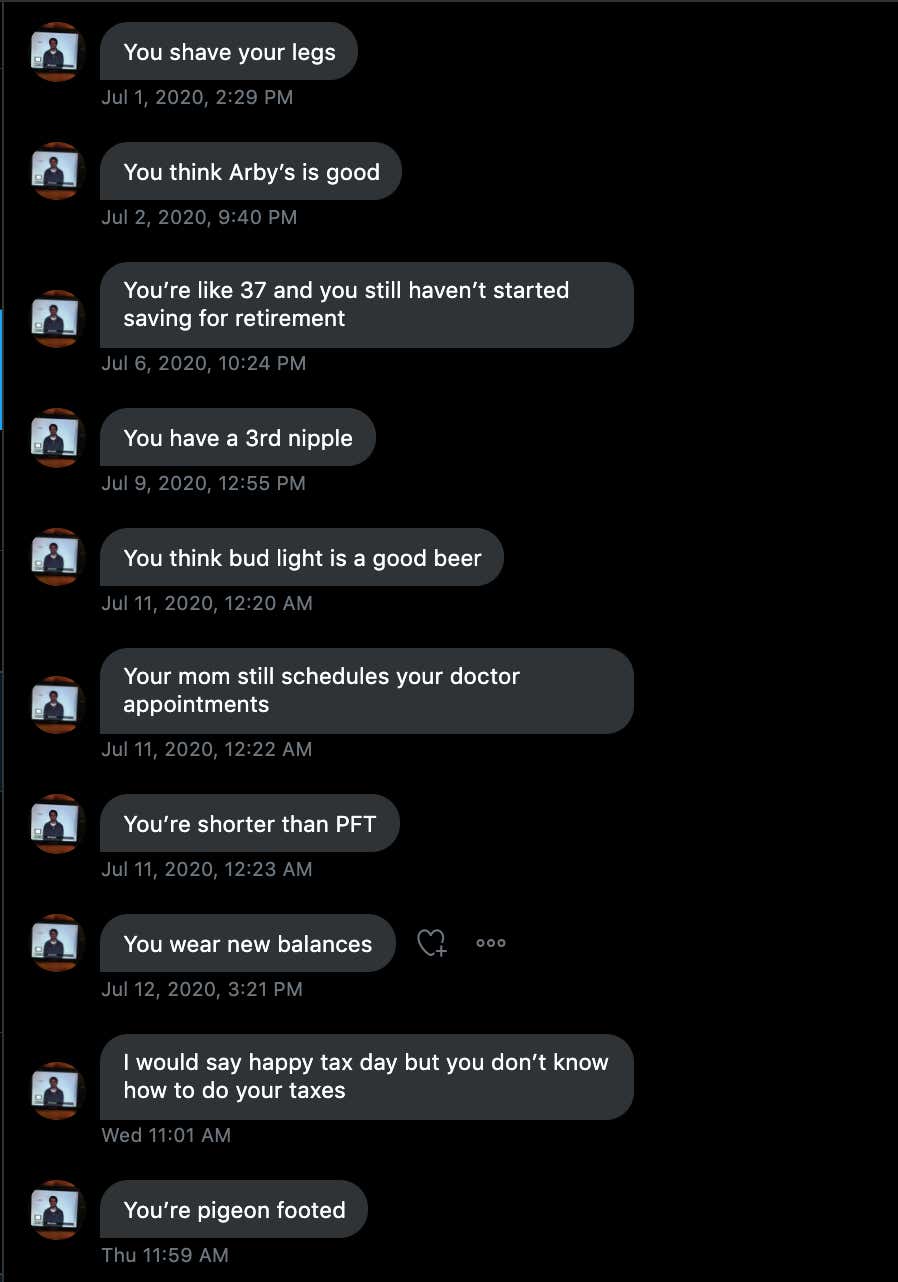 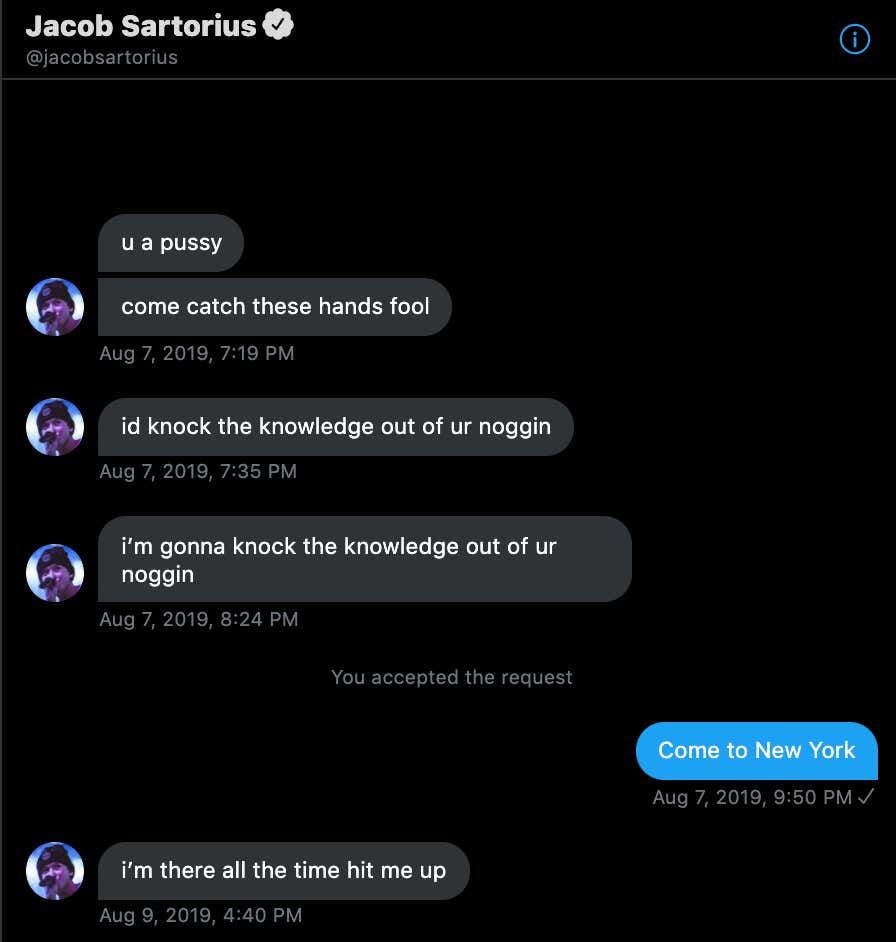 Heck, it feels like the only way I can even have a normal and civilized conversation with someone in my DMs is when I'm entertaining the women who desperately want to fuck me. 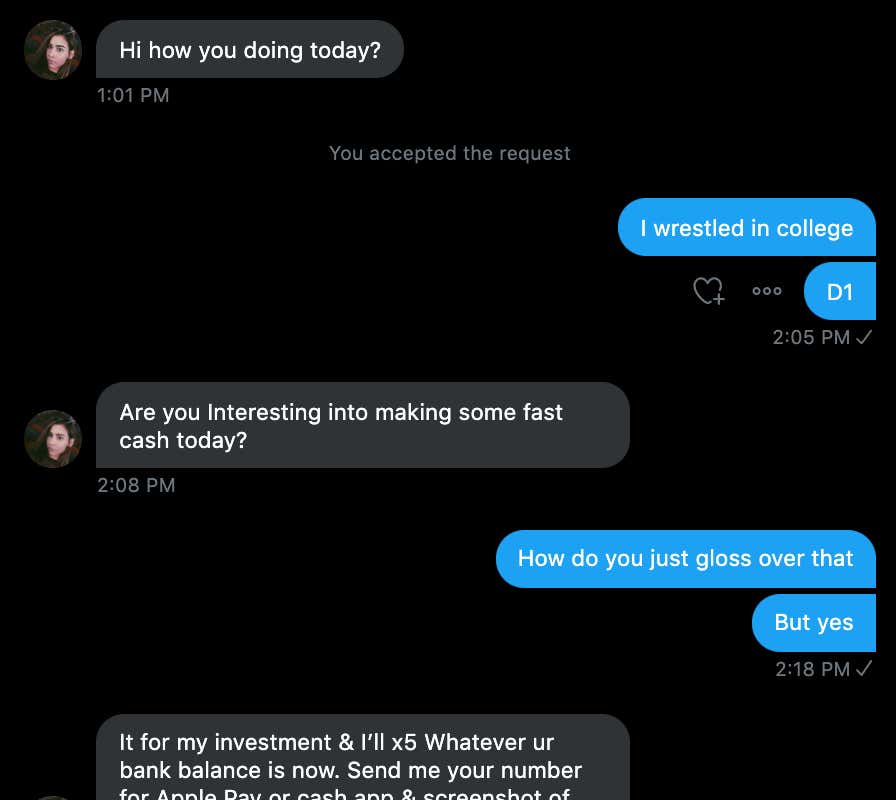 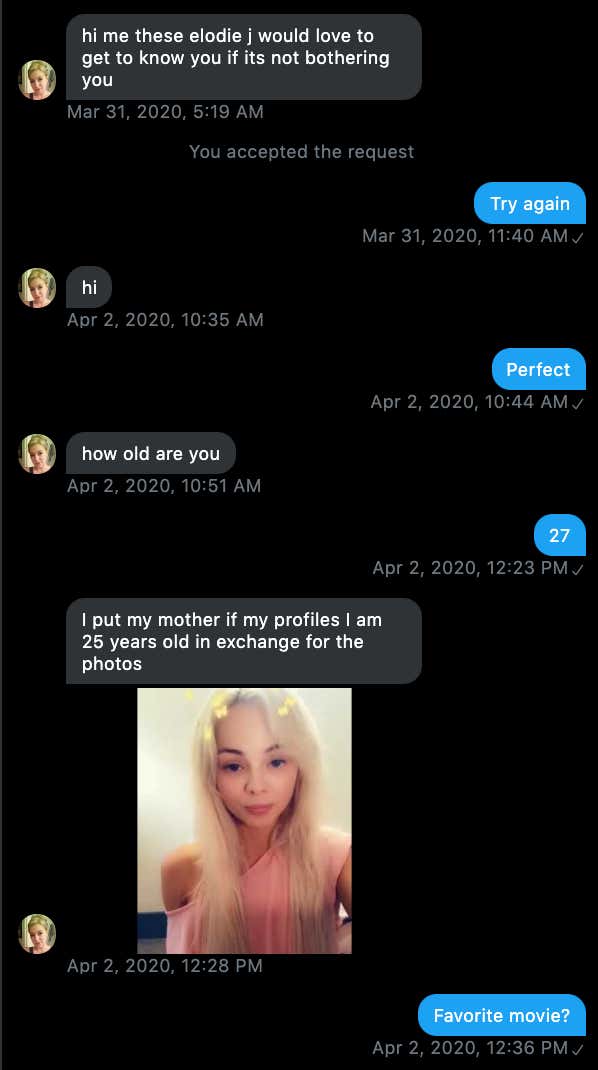 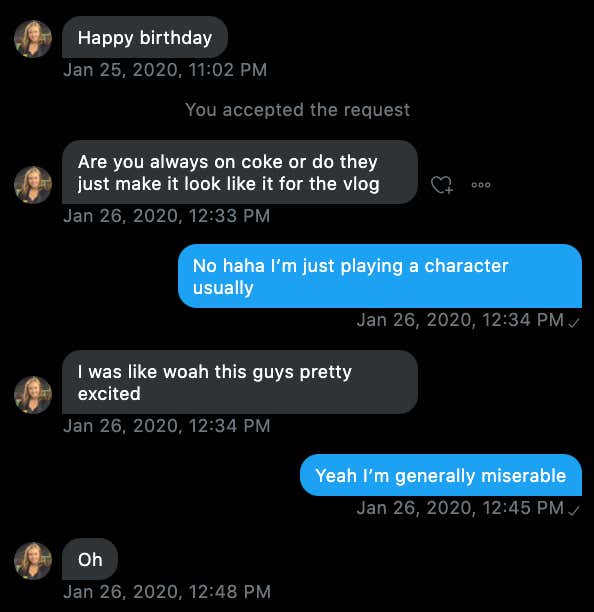 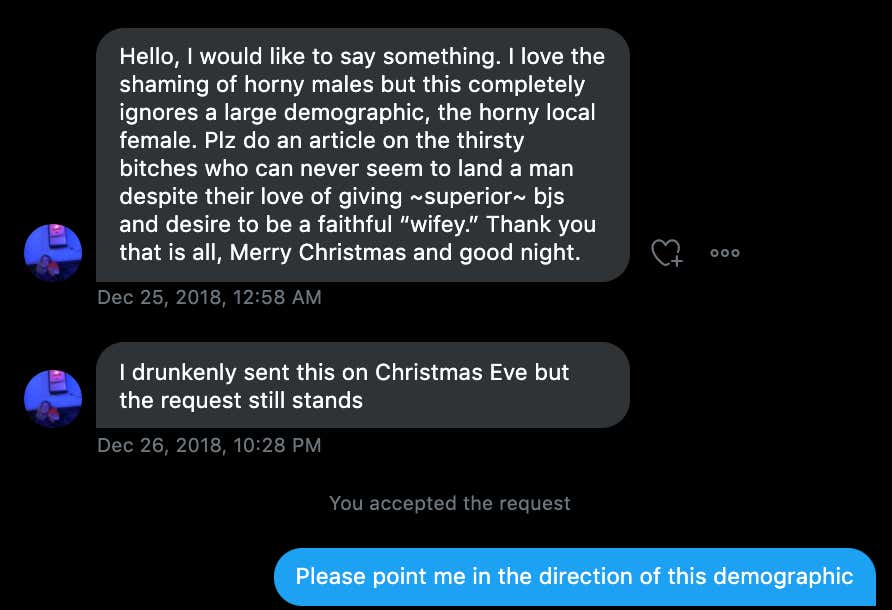 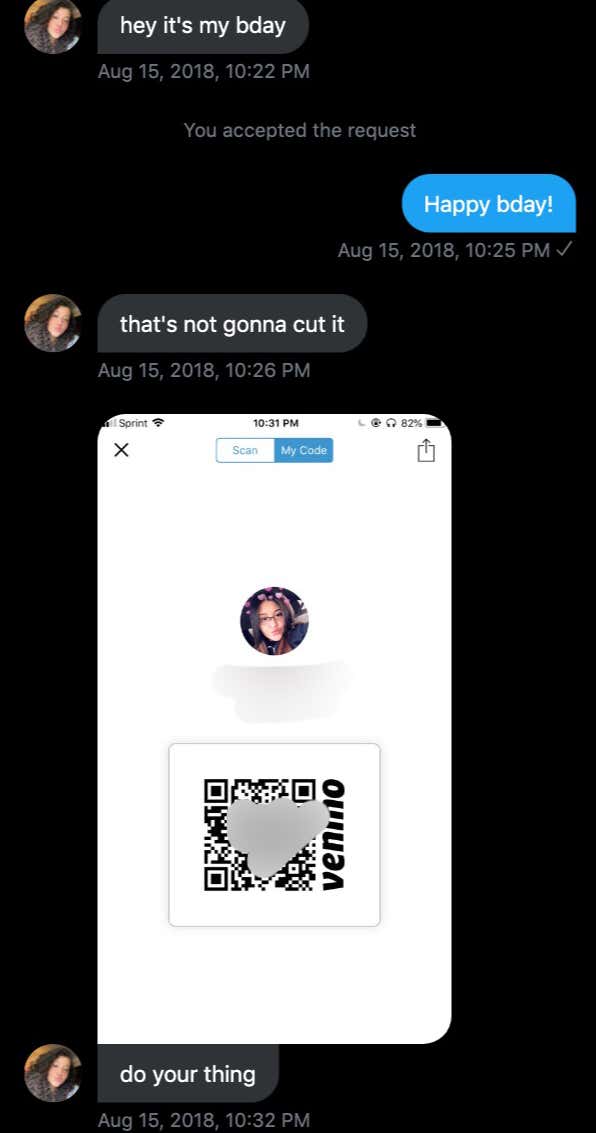 Admittedly, sometimes it feels like I'm getting Reversed Schnitted and these lasses are merely using me for my wealth and generosity. But then I snap back to reality and realize my true worth. 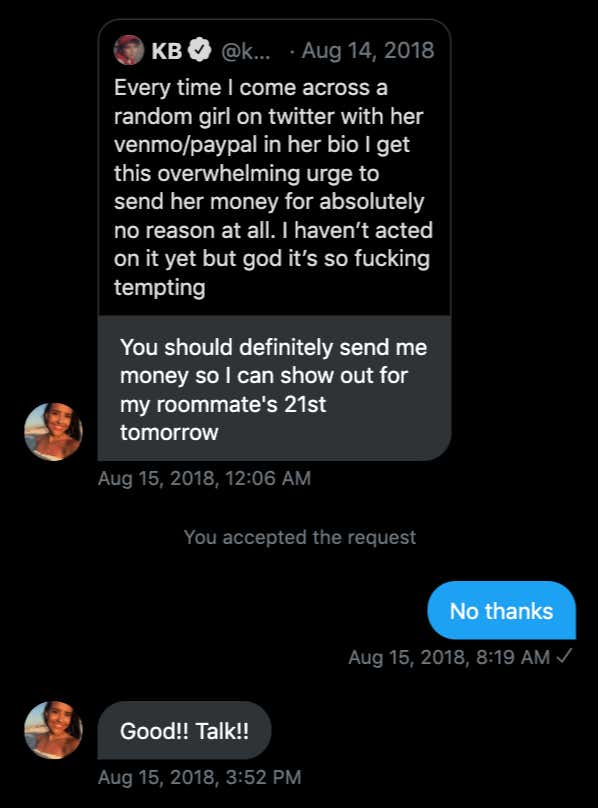 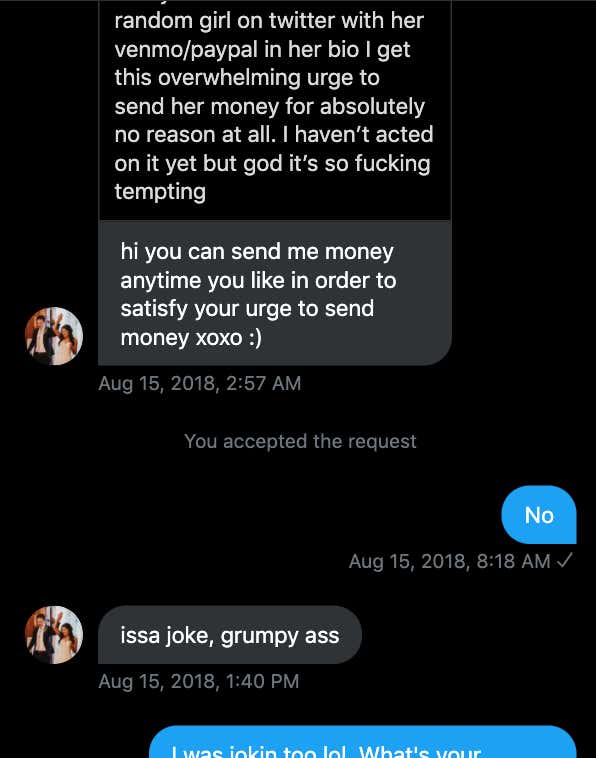 Which is absolutely nothing.

In terms of creepiness, this DM was probably an “Ariel” on a scale from "G-Rated Disney Character" to "Serial Rapist/Kidnapper," but looking back at it months later, something felt amiss. Maybe it was the solo “Lol” or maybe it was the fact that it was just straight up fucking weird, but it gave me a hunch. The date…

April 8th: The worst day of my quarantine by a landslide. Not because something tragic happened to a friend or family member, but because the noun I love the most in the world — my smart phone — was rendered virtually unusable for over 24 uninterrupted hours by the likes of an anonymous enemy. Something that I kept private out of pride and shame until now. 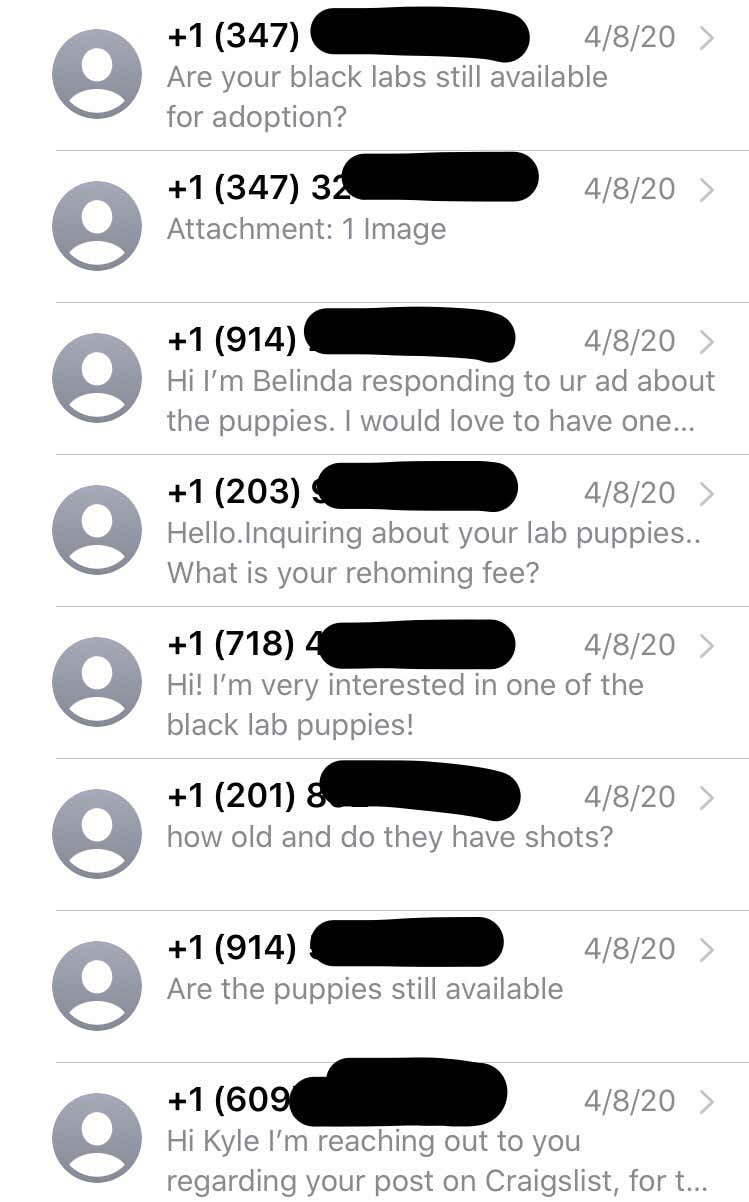 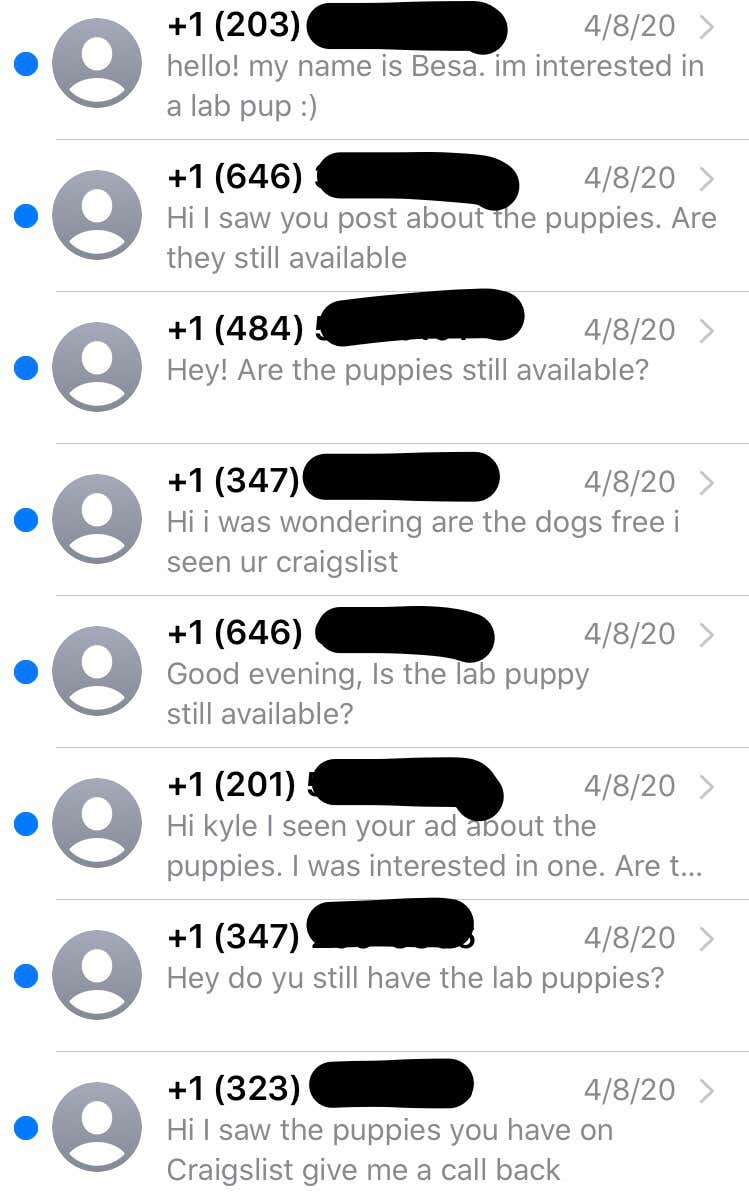 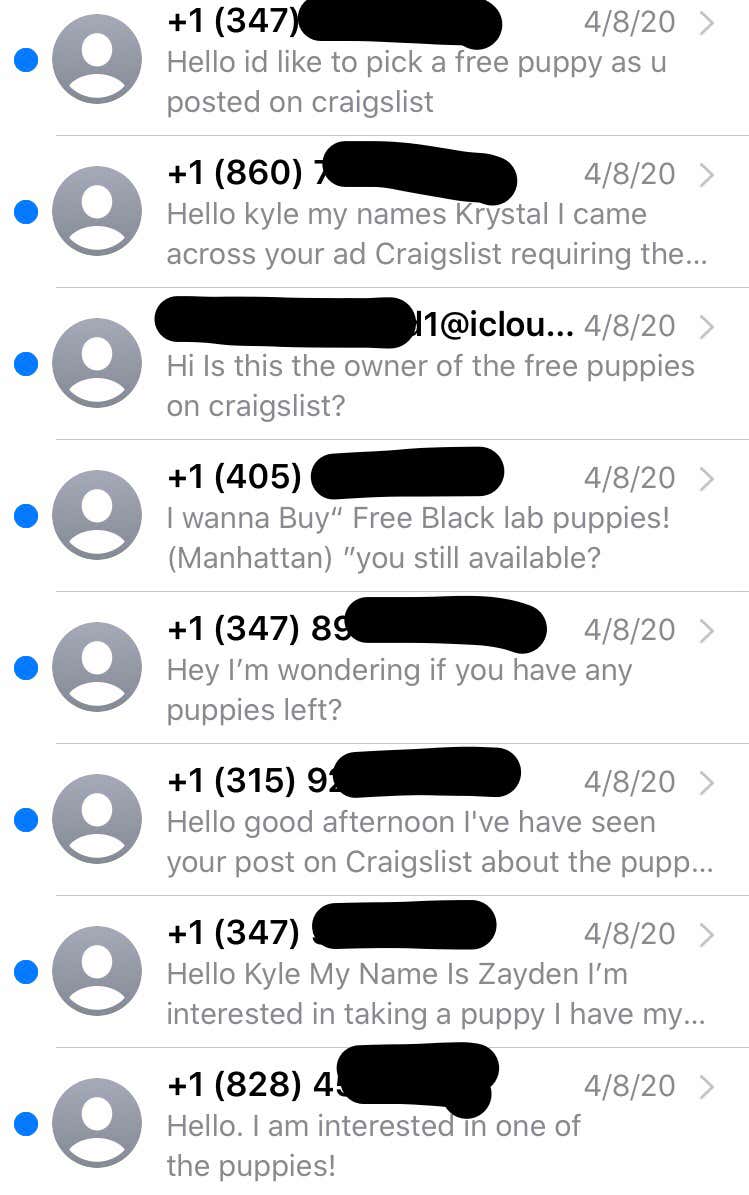 There’s nothing getters hate more than getting got, and boy did I get got. The exact type of people I used to target and harass, unknowingly coming together as a gigantic contingent to ruin my day and give me a taste of my own medicine because a spiteful troll plastered my phone number on the Craigslist page of dozens of different cities. 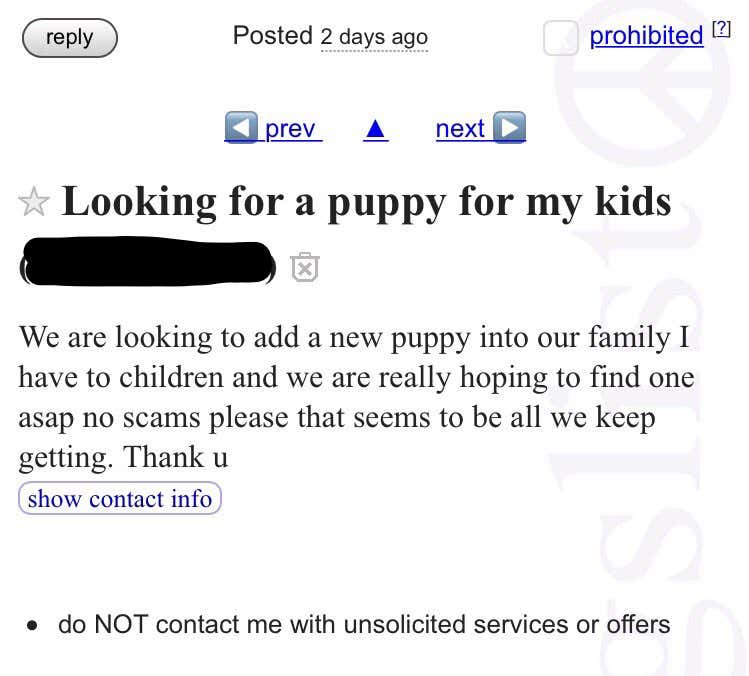 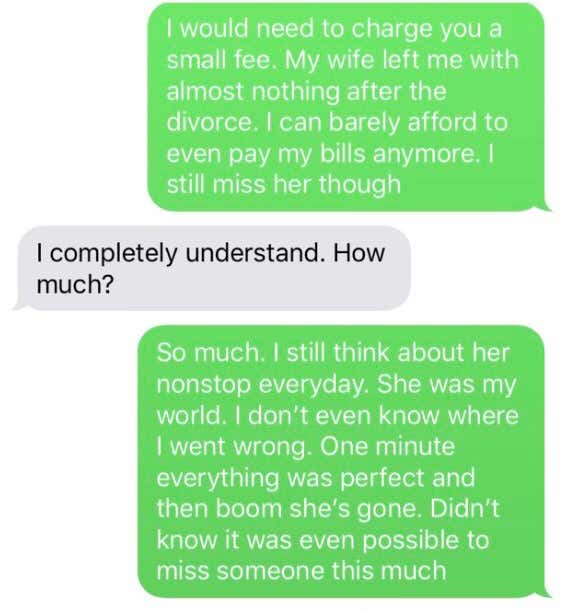 But my biggest takeaway from that minor fiasco is that I’m a shell of my former self. The old me would've tried to turn those texts into a combo kill. For better or worse, I find myself becoming increasingly afraid of feuds and controversy. Whether it comes with real life ramifications or an agoraphobic Minifan raiding my mentions from a bathroom stall at The Wilbur from 20 different accounts, I'm fucking terrified of getting "cancelled." It brings me back to the days when I camped out on the edge and thrived on the threat of cancellation. I don’t even have the desire to turn the vulnerability of the victims of lost loved ones into a viral punchline anymore. It saddens me. 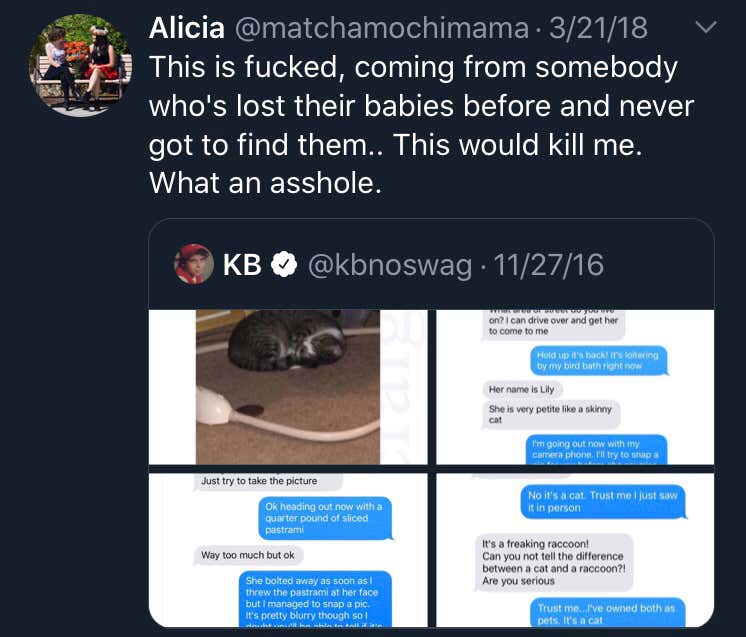 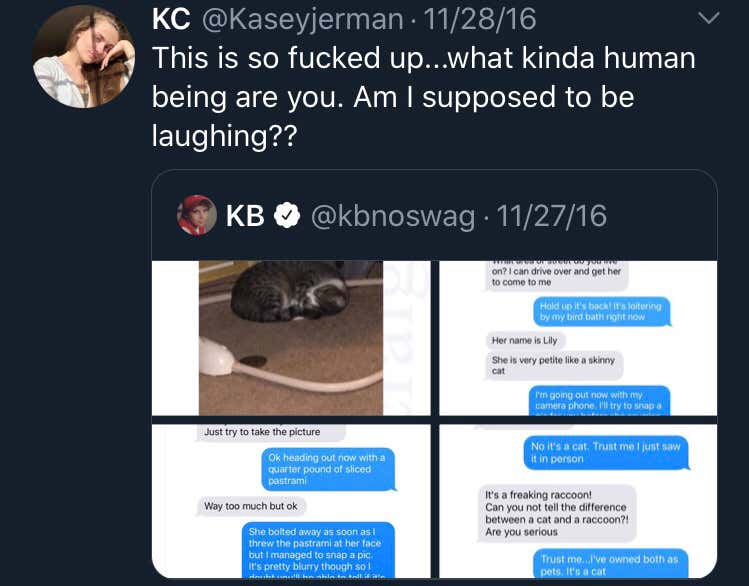 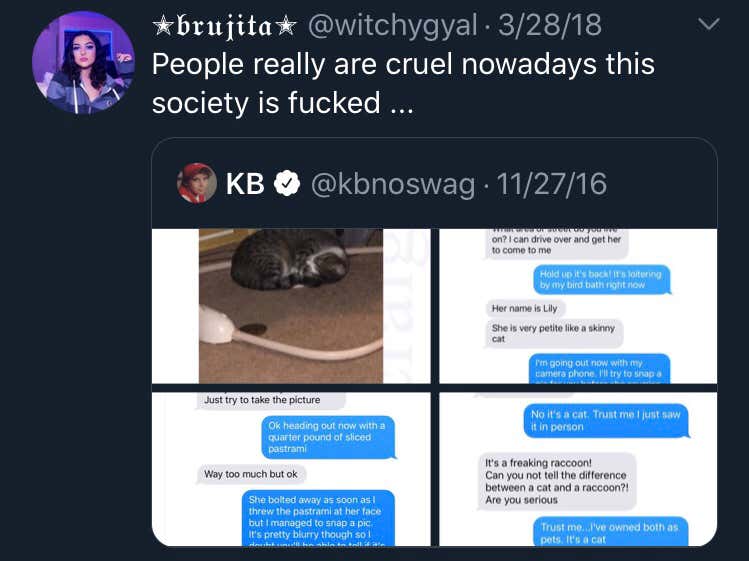 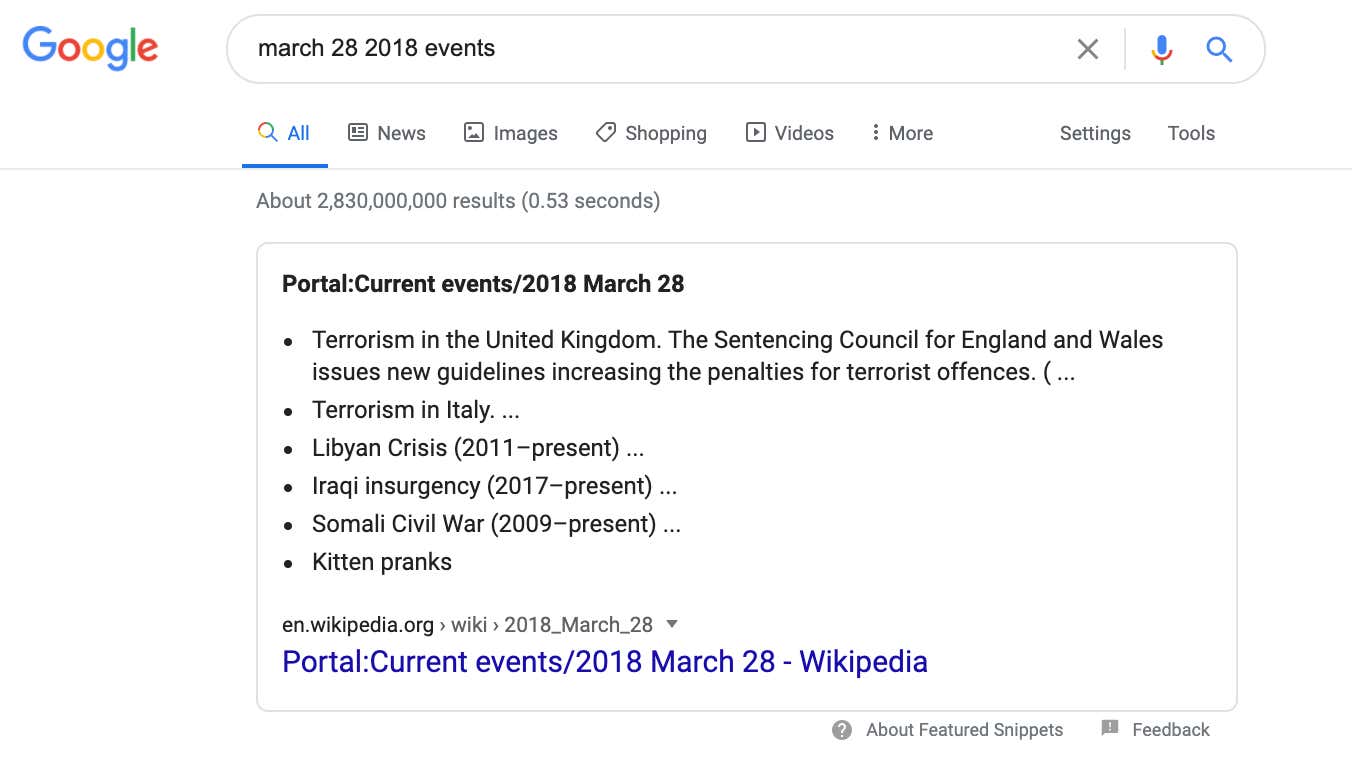