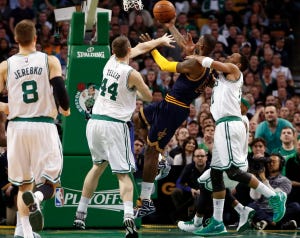 It was clear going into this series that the Cavaliers had the better team and were most likely going to win the series. They have the best player in the league and 2 all star players to go along with him where as this Celtics team was literally put together in late February with a bunch of no names and a second year coach. What’s also clear after watching the first 3 games of this series is that Brad Stevens and his Celtic team of no names aren’t going anywhere in the future. They have been in every game of the series and have never once backed down or given up when the Cavs took big leads. No one expected this team to make the playoffs anyway so the experience all of the young guys like Smart, Sullinger and Crowder are getting is only going to help down the road and if trader Danny can make a big move in the summer for a Kawhi Leonard, Boogie Cousins type player this team is going to be dangerous for many years to come. Celtics in 7.