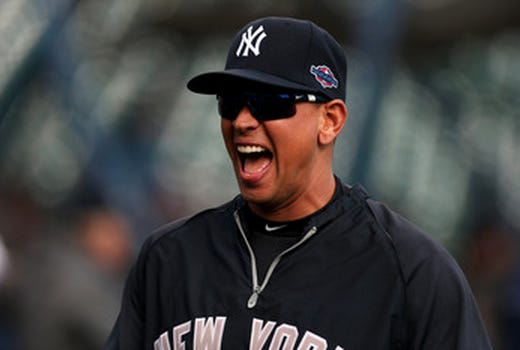 DETROIT — Is Alex Rodriguez a “so-called villain” or not?

During a pregame media session, an out-of-town reporter debated with A-Rod this exact question as a relaxed looking Rodriguez lounged in his corner clubhouse chair. Here is the entertaining back-and-forth.

Reporter: Coming back this season, a lot of fans, see you as the so-called “villain,” you get booed a lot everywhere …

A-Rod: Who said that?

Reporter: It seems like fans see you as that …

Reporter: Most fans, in baseball …

A-Rod: Did you talk to them?

Reporter: It seems like a lot of fans, you disagree?

A-Rod: Everywhere I go, they have been really generous. I’ve been humbled by the reception I’ve received everywhere.

Reporter: Does it seem like you have been booed more on the road?

This right here is a guy who gets it. I’ve been saying all year that ARod just need to embrace that he is the bad guy and act that way and calling a reporter “buddy” is a great first step. For too long ARod has tried to play nice and pushed for people to like him so much, that people hated him. Realistically, no one hates him for taking steroids, they hate him for killing their teams year in and year out. You know it, I know it and most importantly ARod knows it. Rather than dance around it anymore, if you push him he will be very frank.

The media is never going to love ARod, and the opposing teams are always going to hold the PEDs against him, so why try? I’m just happy he isn’t trying to play media games anymore and is instead letting it show on the field by leading this team that desperately needed a leader.