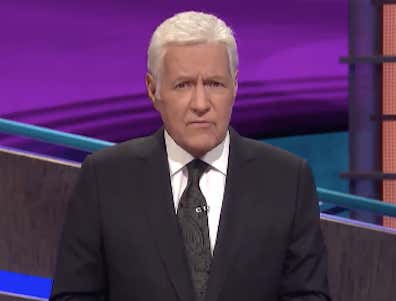 Vulture- Ahead of the release of his new memoir The Answer Is … Reflections on My Life on July 21, the New York Times caught up with America’s quizmaster general Alex Trebek in quarantine to, well, do some reflecting on his life. The good news is Trebek has been keeping busy in quarantine making repairs around the house and recording episode introductions for the upcoming four-week Jeopardy! retrospective series. Trebek says that being able to tape these videos for the show “‘is some kind of elixir.’” However, a year out from his advanced pancreatic cancer diagnosis, the Times writes, “Trebek’s prognosis has worsened. If his current course of cancer treatment fails, he plans to stop treatment.”

“Yesterday morning my wife came to me and said, ‘How are you feeling?’ And I said, ‘I feel like I want to die.’ It was that bad,” he said. “There comes a time where you have to make a decision as to whether you want to continue with such a low quality of life, or whether you want to just ease yourself into the next level. It doesn’t bother me in the least.”

So this report hit the internet today and it obviously sucks. Alex Trebek has already put on a hell of a fight against that awful disease and every day he continues to fight it is a gift.

The crazy thing is that 24 hours ago, Trebek looked good in a video announcing that his treatment has been going great and he plans to return to Jeopardy in September.

I don't know if anything has changed since these New York Times quotes came out considering all the clearances needed to get shit in print or those quotes are just a grimmer/realistic view of the video from that beautifully bearded man's mouth. But I am going to blindly rebuke the report from existence and essentially Men In Black flashy thing it from my memory. If you want shitty news, that's pretty much all the internet has in stock right now. So I am going to stick with the story that Alex Trebek is doing as well as he can be considering the circumstances and look forward to reading his book on July 21st followed by watching him host new episodes of Jeopardy come September.

Get well Alex and as always #FuckCancer