With all due respect, if you aren't down with The Golden Girls you can choke on one.

Variety - For the first time in 65 years, the Los Angeles home made famous by the American sitcom “The Golden Girls” has officially hit the market, as was first reported by the Wall Street Journal. The property is currently asking a little under $3 million, a lot of money for a not-even-3,000 sq. ft. structure. But as Blanche (Rue McClanahan) might say in her signature Southern drawl, that’s just the price of being a devastatingly beautiful house.

Fans of the show will recognize the home as the one owned by Blanche, who, after the death of her husband, invited a few friends to come live with her and keep her company. Although scenes that happened inside of the house were shot on a set, exterior shots of the home that have become synonymous with the hit series were of a real, private residence. (A perfect replica of the home formerly resided at Disney’s Hollywood Studios, but was demolished for space in 2003.)

Located in L.A.’s upscale neighborhood of Brentwood, the home boasts four bedrooms and 3.5 bathrooms within about 2,900 square feet. The structure’s unique architecture is best described as a tasteful blend of Japanese and Hawaiian plantation styles, and it was constructed in 1955 by SoCal Edison attorney David Noble Barry III and his wife Margaret Carr Barry, after they were inspired by the midcentury modern home that David’s father owned in Hawaii. The couple lived in the L.A. digs for over 60 years, until their respective deaths in 2017 and 2019; the property is now being sold through a trust.

For argument's sake, let's pretend Blanche actually did live in this house.

Do you know how much sex these walls have seen?

And not just the regular ho-hum missionary yawner kind either.

We're talking the full-blown break the furniture, "is that a sex toy or a weapon?", neighbors call the cops because they think there's a murder being committed" kind. The fun stuff.

As documented in my very under-the-radar Golden Girls, "Breaking Down Their Skills in the Bedroom" blog, Blanche was an out-in-the-open FREAK. And she'd been around the block more times than the ice cream man. 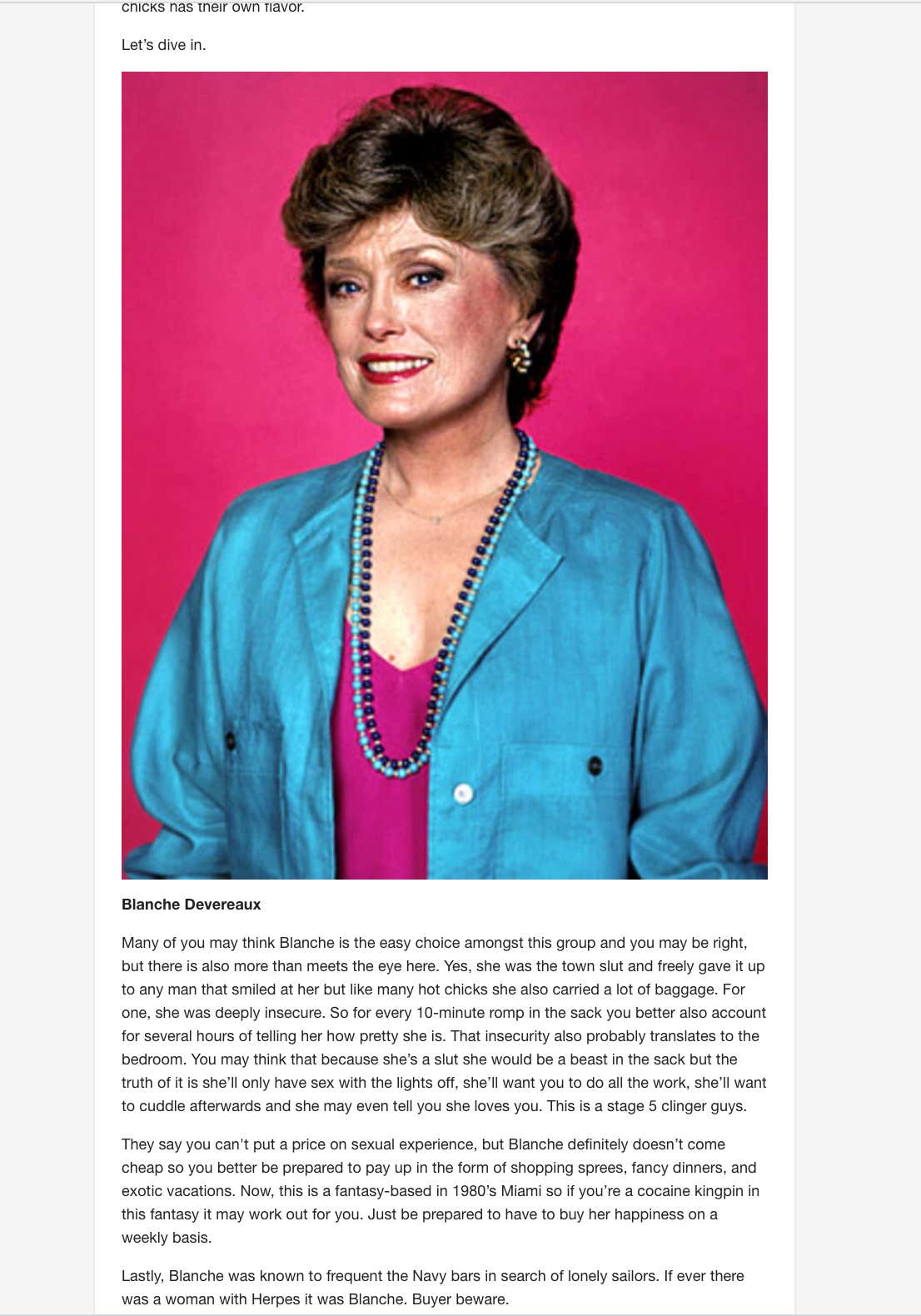 Many of you may think Blanche is the easy choice amongst this group and you may be right, but there is also more than meets the eye here. Yes, she was the town slut and freely gave it up to any man that smiled at her but like many hot chicks she also carried a lot of baggage. For one, she was deeply insecure. So for every 10-minute romp in the sack you better also account for several hours of telling her how pretty she is. That insecurity also probably translates to the bedroom. You may think that because she’s a slut she would be a beast in the sack but the truth of it is she’ll only have sex with the lights off, she’ll want you to do all the work, she’ll want to cuddle afterwards and she may even tell you she loves you. This is a stage 5 clinger guys.

They say you can't put a price on sexual experience, but Blanche definitely doesn’t come cheap so you better be prepared to pay up in the form of shopping sprees, fancy dinners, and exotic vacations. Now, this is a fantasy-based in 1980’s Miami so if you’re a cocaine kingpin in this fantasy it may work out for you. Just be prepared to have to buy her happiness on a weekly basis.

Lastly, Blanche was known to frequent the Navy bars in search of lonely sailors. If ever there was a woman with Herpes it was Blanche. Buyer beware.

Blanche was a sex addict before the term sex addict was invented. A pioneer. A trailblazer even.

You can't put a price on a house like this.

Talk about a conversation starter.

"Why yes bartender, I'll just have a miller lite please. I need something cold and refreshing after spending all day moving into Blanche from The Golden Girls old house."

Flock of extremely attractive girls with sonar hearing descend upon you - "Excuse us, did you just say you moved into Blanche's old house?"

"Uh, yah. I bought it because the landscape architecture spoke to me."

The line about the landscaping was no joke either. You wouldn't be lying.

In addition to being architecture and design enthusiasts, the home’s former owners also apparently dabbled in collecting exotic plants. The property’s grounds are dotted with an unusual species of palm trees, and the lush landscaping includes several eye-catching tropical specimens. Surrounding the perimeter of the house is a Japanese engawa, a wraparound porch, that connects to the home’s veranda in the back, which offers up the perfect place to lounge in the hot summer months. “Golden Girls” location scouts were initially drawn to the home’s flourishing flora since it gave off more of a Miami vibe than most L.A.-area properties. The Barrys agreed to have their house featured on the show for a small fee and loved having their famous home be seen on a national platform, though they were reportedly not sitcom fans and didn’t watch the show.

p.s. - The intro song "Thank You For Being a Friend" needs to play everytime anybody walks in the front door of this place. Bang-er.