ICYMI, Offset bought his daughter a $9,000 purse for her second birthday. And not just any purse, a Birkin. If you're unfamiliar with the brand, Birkin bags are extremely expensive and extremely exclusive. You don't just wake up one day and decide you want to buy a Birkin. You wake up and decide you want to put your name on a waitlist for a Birkin and then you wait a few months and/or years to actually get the bag.

Well, unbeknownst to her, little Kulture waited all two years of her life to get her first Birkin bag, but it finally happened! 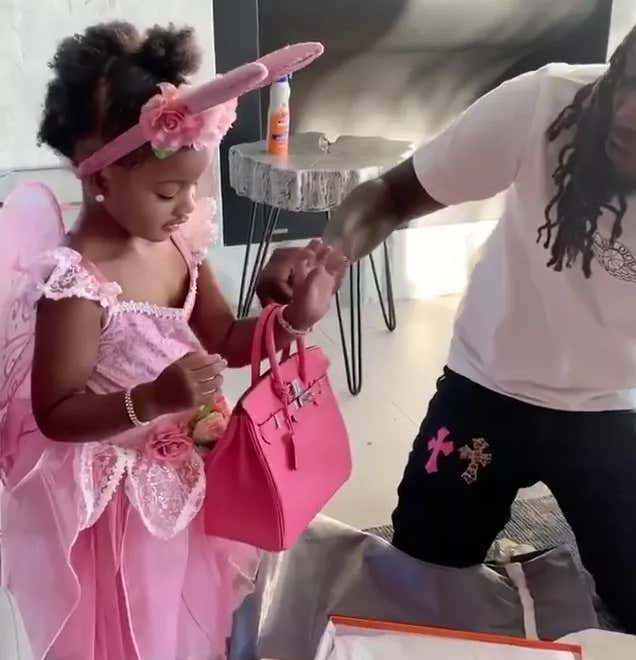 Is she thrilled about it? Is it her favorite birthday gift of all-time? Is it everything she dreamed about and more? Will she remember the day she opened that bright orange box for the rest of her life? Prob not. In fact, she probably doesn't give a shit about the bag because she's TWO. Two-year-olds don't get excited about clothes, shoes, or purses because, again, they're two! However, I can guarantee you she'll care about that purse when she's an adult because Birkin's are timeless and, in most cases, their value only increases with age.

But even if she doesn't care now or then... why the fuck do you? Would I gift my 2-year-old daughter a $9k purse if I had the money (and daughter)? Probably not as I'm more of a shoe girl myself, but my way isn't the only way. So why are people so upset Offset bought his daughter a gift he wanted her to have? 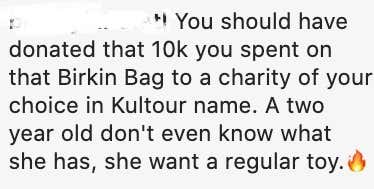 Ohhhhh! Because instead he should have donated the money! Kultour doesn't know what she has, but she WILL understand a donation has been made in her name!

Once again, Offset just wasn't thinking. By gifting such a lavish gift he's essentially depriving someone of something they need.You can't just give a kid a gift without considering all the people you've never met who could use your money. In this case, the $9k could have saved a family. It may be his money, but he's not allowed to ever spend it on what he wants until everyone in the world is without need.

But that's not the point. The point is Offset should have given his daughter a gift that prioritized strangers' needs instead of his wants.

It's true - this gift does not teachers her about values and morals, and everyone knows all the best birthday gifts do. Especially when you're two. Maybe if Offset would have gifted her a self-reading bible or Oprah, he wouldn't be getting criticized.

Or maybe he shouldn't have given her anything at all? Maybe instead of a gift, he should have put her 2-year-old self to work! Sure there are laws against child labor, but if he truly loved his daughter, he wouldn't allow her to mooch off him for two years and be part of the problem.

Unfortunately, it appears neither Offset nor Moma Cardi B are putting their kids to work anytime soon or cutting back on the fancy gifts.

So now's probably a good time for all us to mind our own fucking business and stop creating digital wars over gifts celebrities buy their kids.