So this is some pretty substantial news coming from the bubble that could very well impact how the Eastern Conference 2-6 seeding shakes out. I know it's been forever so chances are you maybe forgot how things stand as we enter the restart, but basically everything is up for grabs for every team not named Milwaukee 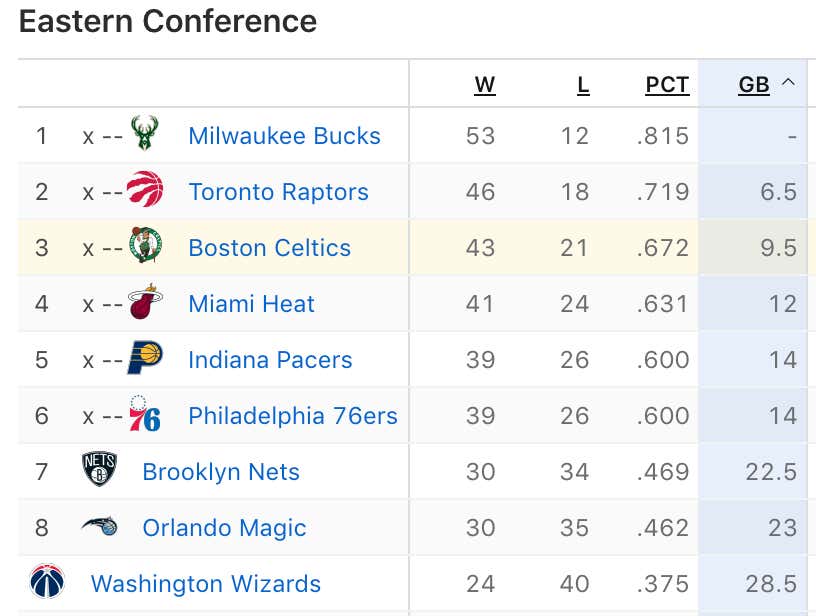 In terms of strength of schedule in the 8 ramp up games for the East teams, the Sixers have the second easiest schedule in the league, followed by the Celts who have the third easiest. The Pacers come in at the 14th hardest and the Heat and Raptors have the two hardest remaining schedules of anyone. So you can assume that the chance things shift around are pretty good. Without Oladipo, I don't think it's crazy to suggest that the Pacer would fall out of that 4/5 in favor of PHI who is fully healthy which would mean a couple things. It gives PHI a date with MIA in the first round which could be tough given Butler and the shooting that MIA has, and it also gives them MIL in the second round as opposed to potentially in the ECF. For BOS, it gives them a IND/TOR run before the ECF which would mean if they don't catch TOR for the 2 seed, it's not the end of the world.

Now of course, this all depends on what Oladipo looks like. If we're being honest, his return this season wasn't all that great. He came back on 1/29 and the Pacers were 7-6 in the games he played. He put up just 13/3/3 on 39/30% splits, but after missing so much time of course he was going to be rusty. If that's the version the Pacers get in Orlando it probably won't matter that he plays. But if they get this?

Their chances of staying in that 4/5 spot and possibly advancing look pretty good. Remember, with a healthy All Star caliber Oladipo, the Pacers had the 3rd best defense in the league. Their offense was average, but this year they have legit wing scorer TJ Warren added to the mix. If they can add a healthy and Oladipo of old, that changes things.

We should also mention all the stuff going on with his contract and the $3M he's owed. If he's medically cleared and chooses to not play, he won't get paid. I don't know how much that factors into him announcing he will play, but it's worth noting. I think it's also pretty important in terms of the Pacers decision they have to make this offseason. I imagine they want to see what he looks like before getting back into extension talks, and if he doesn't have it and the Pacers don't want to extend him they almost have to trade him this offseason or risk losing him for nothing after next season.

All I know is Oladipo is the type of talent that can absolutely change the dynamic of a series and the potential 2-6 seeding in the East, which could ultimately lower or raise a team's potential playoff ceiling. That's what makes this so interesting to me. Not just if he plays, but how he looks after all this time off and what impact that has on everyone else. I hope he plays and is the best version of himself because All Star Oladipo was fun as hell to watch and I think it would be a pretty cool story given how gruesome that injury was.

With about two weeks to go before the games start, now that we're getting all these quotes about how good he feels and that he's been going 100% in practice, my money is on him changing course and does actually play.