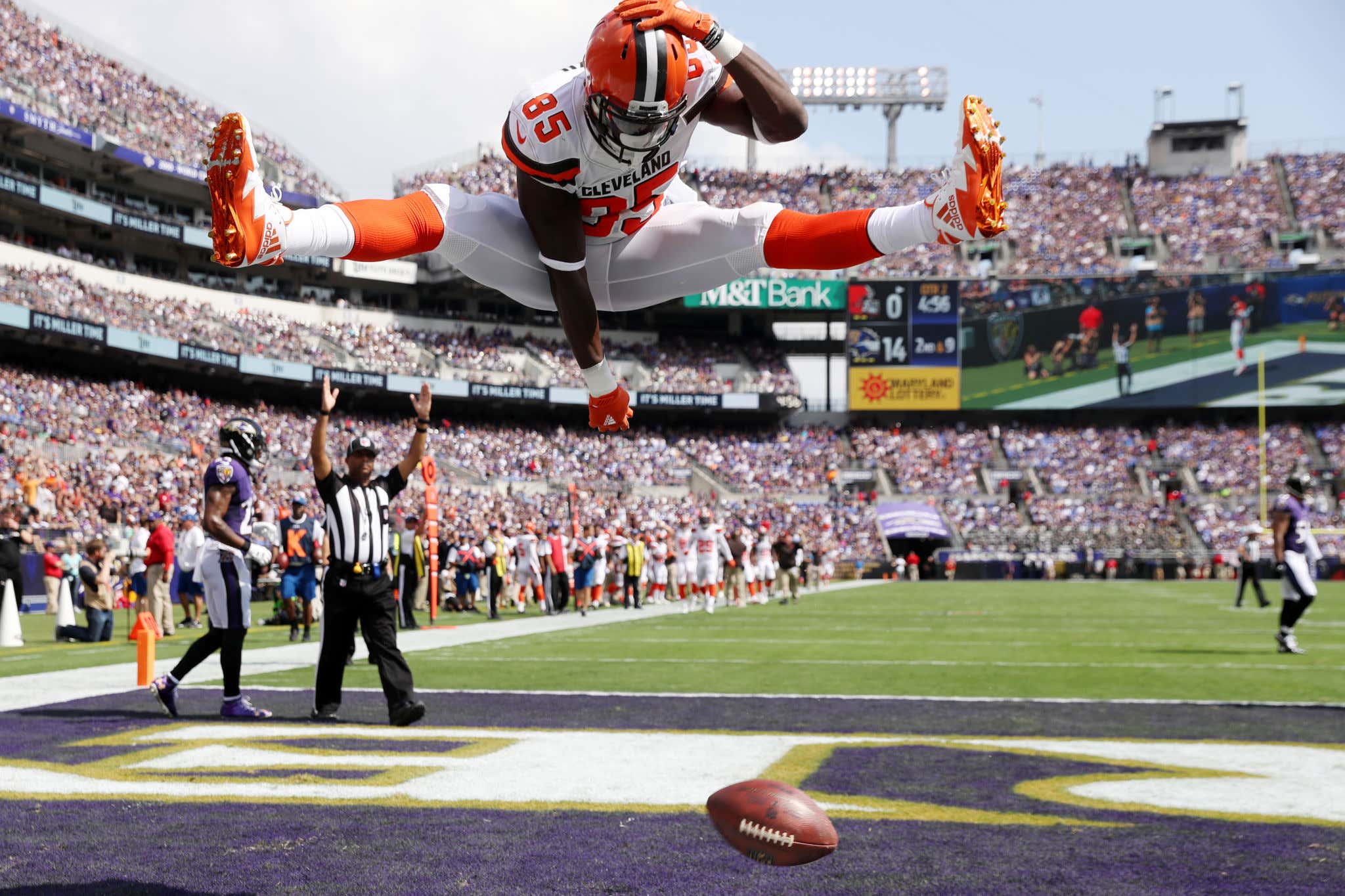 At the beginning of the week, I wrote about some deft salary settlements by the Patriots negotiators and some creative maneuvering by their accountants took the team from less than $700,000 in cap space - the lowest in the league - to $7.79 million.

And how that means that a roster that had been frozen (at least temporarily) suddenly had room to add veteran talent. And one of the players I put on my shopping list is tight end David Njoku. Since he, like any rational, compos mentis individual, has decided he'd prefer to play pro football for somebody other than the Cleveland Browns and has asked the team to trade him.

And the more I think about it, the more it seems that Njoku and New England are too perfect a match for this not to happen. The Pats have two promising first year tight ends on the roster in Devin Asiasi and Dalton Keene, the No. 2 and No. 4 tight ends to come off the board in the last draft. But it's a complicated position for any rookie, even with a full offseason program, which fate has obviously denied them. In his first year, Rob Gronkowski had the lowest production of any full season of his career. And the same was true for Greg Olsen, for Jimmy Graham, and for Travis Kelce's second year after missing practically all of his first.

Easing Asiasi and Keene into roles as the TE2 and TE3 alongside a young veteran like Njoku, who turned 24 just a few days ago, seems like the ideal scenario. And thanks to the fine work done by the mathletes at One Patriots Place, the scenario is no longer impossible. And right now wouldn't even require a subsequent roster move:

And I'm not alone in seeing how perfect this fit would be. From Pro Football Focus:

It’s been over a week now since David Njoku requested a trade from the Cleveland Browns. Per ESPN’s Adam Schefter, Drew Rosenhaus — Njoku’s agent — stated, “It is in David’s best interest to find a new team at this time.” …

These are the teams that make the most sense as landing spots for Njoku to continue to develop.

Of all the potential destinations for Njoku, this one makes the most sense. The signing of Cam Newton indicates that the Patriots have no intention of tanking — otherwise known as “seeing what they have” in Jarrett Stidham. They have a dearth of receiving weapons for Newton, especially at the tight end position. I wrote about what figures to be the training camp battle at tight end between Matt LaCosse, Devin Asiasi and Dalton Keene last week, but the truth is that none of those guys are likely to offer much in the passing game in 2020.

The Patriots could part ways with a mid- to late-round draft pick for a semi-proven player whose value is at a low point — a staple of the Patriots under Belichick. There’s a reason that New England is among the favorites to make the move.

I won't overstate how productive Njoku has been in his three years in Cleveland. The 29th overall pick in 2017, he gets the rookie Mulligan every tight end deserves. He lost all but four games last year to a wrist injury. And in between he averaged 3.5 receptions and 40 yards per game. Which, in a weird way, makes him even more perfect for New England.

Over the years, the last few especially, Bill Belichick has shown a real affection for acquiring former first round picks that had yet to live up to their draft status elsewhere or had simply been made available for whatever reason:

I could go on but you get the point. And note I didn't include Stephon Gilmore (10th, 2012) because no one has lived up to and even exceeded his draft status more, and was only available because Belichick paid him what he's worth, so he doesn't count.

The fact is, the Pats are always willing to bring in a guy who was highly thought of by the stopwatch-and-film study crowd but who, for one reason or another, hasn't panned out. Because they realize very often it's not the player, it's the system or the coaching. Sometimes it works out magnificently, like with Cooks and Long. Sometimes it doesn't pan out, like with Cooper. Most of the time it's been a mixed bag, such as Shelton and Dorsett. But the point being that they're always willing to try a reclamation project when the raw talent is there.

And if I can mix my RomCom tropes for a second, Belichick loves to find the broken guy who isn't living up to his potential to see if he can fix him. And he and Njoku just seem meant to be together. You can see the plot unfolding that way and I hope that's how it ends up. Even if it's just for one year before he goes off with someone else. It's just feels too perfect not to.