Yesterday I blogged about Johnny Bananas being the GOAT of The Challenge but I didn't give Bananas taking the money and running the amount of love it deserved. It was a legendary reality TV moment that legitimately shocked the entire Challenge audience that didn't know they could still be shocked by the savagery and debauchery of these crazy motherfuckers on TV. But Bananas pulled the ultimate betrayal, created an all-time reality TV moment, and may have cursed himself since his championship run immediately ended after ripping thousands of dollars out of Sarah's hands along with her heart clean out of her chest.

Bananas then hit a massive cold spell in The Challenge with many people wondering if he had caught a curse along with Sarah's cold cash. Then he won the final on Wednesday night and surprised us on No Quitters while we discussed the final.

Onto the blog I wrote right after the Rotten Banana Move Heard Round The World:

Quick primer for non-watchers. After going through an entire season as partners and winning a relatively grueling final, Johnny could either split the $275,000 grand prize with Sarah or take it all himself because he did better than her during the final. Sarah sent Johnny into an elimination right before the finals a few seasons ago, but the two were long time friends. Johnny Bananas is also the cerebral assassin of The Challenge. All set? Good. Let's slap some memes on Sarah's still warm body. 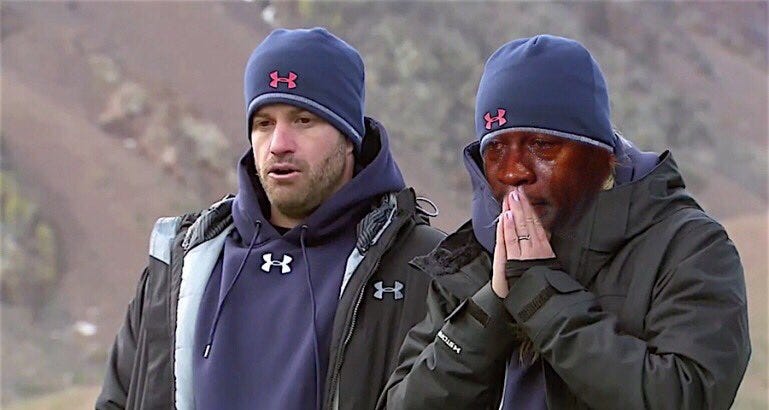 "Watch this, Lisa. You can actually pinpoint the second when her heart rips in half." 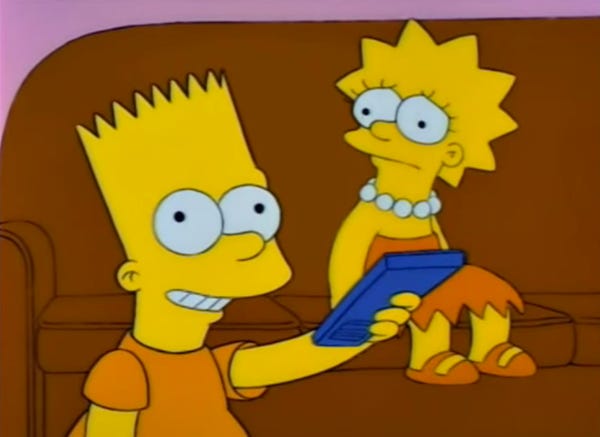 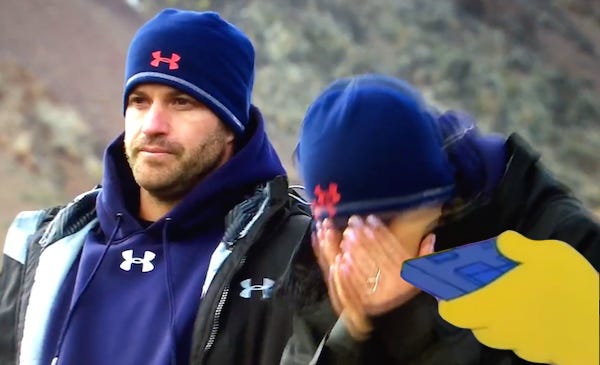 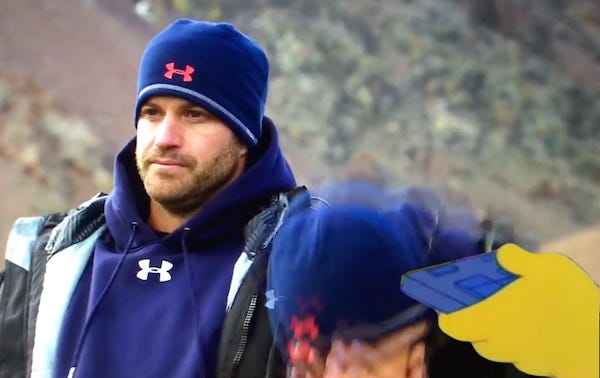 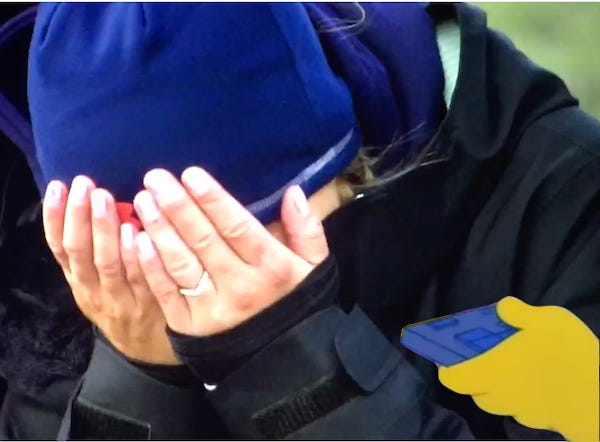 Even Y2J weighed in!

Well we had another shitty final last night. Sure climbing up a mountain, eating a bunch of weird ass foods, and making people stay awake all night would probably would kill a good chunk of Barstool bloggers. But still, the final was lame. Luckily MTV hit us with an all-time great #supertwist and Bananas #supertwisted a knife right into his partners back to win an additional $137,500.

I was trying to think of a move in reality show history as diabolical and I really can't come up with one. The closest I can think of is the finale of the first Survivor, when Sue ethered the shit out of Kelly as a nation watched.

Now granted, Sarah did throw Bananas into an elimination right before the finals despite being friends years ago. But I'm pretty sure Bananas has pulled that move multiple times. And I think there is something different when you do it to an opposing team during a game and doing it to your partner that helped get you to the finals and to the top of a mountain. $137,500 may not be classic life-changing money, but it definitely helps you get a business off the ground. And while Sarah's rah rah personality can sometimes be grating like nails on a chalkboard, seeing a regular person get a shitload of money taken from them is brutal.

Howevaaaaaa, the other side of this is I love how Bananas pulled this all off. Scott Tenorman ain't got shit on him. Bananas didn't trick Sarah into eating her parents (at least I don't think he did), but he ruined her. Heisenberg thinks that move was ruthless. Bananas was always a heel, but he went super duper heel last night, especially while wearing the Rotten Banana shirt during the reunion was like Hollywood Hogan spray painting nWo on the WCW belt and a t shirt mogul move that would make Pres blush. 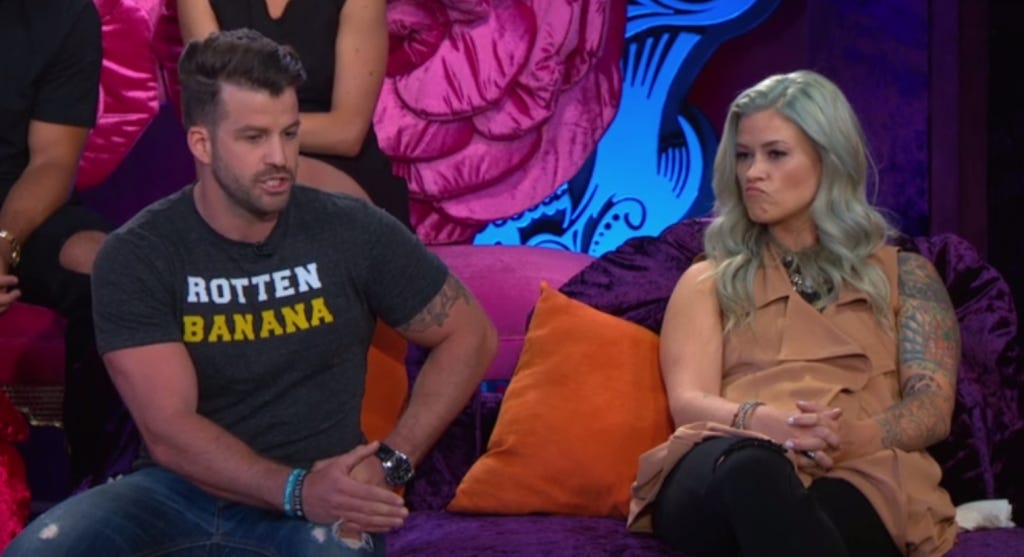 Plus Sarah apparently narc'd on Bananas for using adderall during the reunion show, which MTV cut.

?The Challenge: Rivals 3? winner Sarah (Rice) Patterson made some big allegations about her partner at the MTV reunion show. During the taping at the network?s headquarters in New York City on July 12, attended by International Business Times, Sarah alleged that Johnny ?Bananas? Devenanzio, her ?Rivals 3? teammate, was caught with drugs during the final. However, MTV says there is no proof to back up her claims.
In front of a studio audience Sarah claimed that Johnny was found with Adderall, which is typically used to treat ADHD and narcolepsy, in his possession during the final episodes. Sarah, who hinted Johnny may have used said substance to help him perform better during the competition, alleged the network fined the six-time ?Challenge? winner $5,000 for the incident. No other ?Challenge? cast members at the taping admitted to seeing Johnny get fined, and the ?Rivals 3? winner had some choice words for his co-star after the fact. ?Lose with class, man,? Johnny told his partner.
Sarah went on to say she didn?t care if MTV decided to cut her statement out of the broadcast but wanted those in attendance to know what happened. However, a rep for the show tells IBT ?there is and has not been any truth or proof to prove this? in response to Sarah?s claims.

Can't feel bad for someone that would rat on her teammate, even after he ripped her guts out. It's nice to know that if snitches don't get stitches, they will at least get a big fat goose egg in their bank account after living in that romper room of a house for months and winning a final.

And to all the people that started GoFundMe pages for Sarah, a reality TV star who lost a bunch of money because she trusted JOHNNY FUCKING BANANAS, please do me a favor. Find the highest scaffold hanging over a body of water in a third world country and jump off it right now.

Also I am not discounting that Bananas could have said he was taking the money, only promising to cut Sarah a check on the low to make this a huge TV moment while also turning a crappy final into an epic TV moment. But I imagine it gets MUCH harder to split that money with someone once it is in your bank account. Yeah, no chance the puppet master did that.

So I guess we can say that Bananas is involved in the two biggest Challenge moments ever? Ripping someone's heart out through their chest like Kano in Mortal Kombat almost erases the Bananas backpack.

For people that want to hear more about this seminal reality TV moment, Bananas joined us on No Quitters to discuss why he crushed Sarah's soul for a little more than $100,000.