Lisa Rinna celebrated her 57th birthday by posting a Playboy "birthday suit" photograph from a past shoot, and let me just say, wow. Not only is this woman clever, but she exudes sexiness, elegance, and just the right amount of high-class escort vibes only Playboy could perfectly produce. In fact, this pic is so classy, even Instagram is breaking their own "no nips" rule by allowing the post to exist and them to be free.

Of course, not everyone is so freethinking. (credit: Page Six)

“Always a huge fan, but this is a bit much,” one user commented.

“What is wrong with you???? You are supposed to be a role model,” another replied.

I wasn't aware people viewed Lisa Rinna as one of our great American role models, but then again, I'm not a mother so I don't know who my children look up to. What I do know is that her very own daughter, Amelia Gray Hamlin, posted a message on that very picture.

Which of course people wrongfully took as a sign of her complete disapproval. 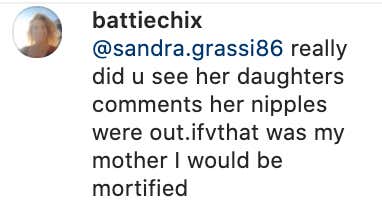 "If that was my mother I would be mortified." Well, guess what, folks? That's not your mother and you are not her daughter. You think her daughter hasn't seen that and every other Playboy photograph her mother has posed for? You think Amelia Gray Hamlin gives a shit if her mom's nips are out for the world to see?

I also doubt that her other daughter, Delilah, is bothered by the visual considering they put on a little show together while wearing matching sheer dresses.

If anything, her daughters consistently post about how amazing their mother is and seem to spend a lot of time with her.

But whatever, haters are gonna hate and that doesn't seem to bother Rinna one bit.