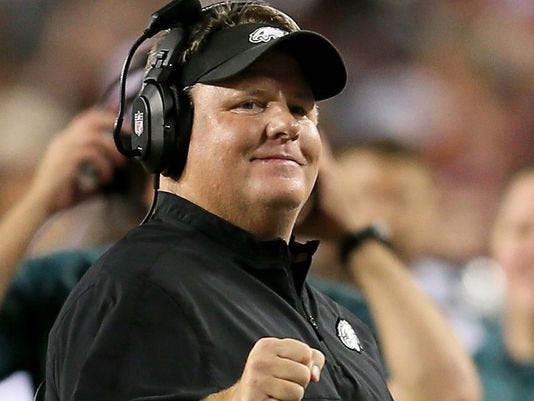 PHILLY – Mathis, who has been the subject of trade speculation and has it made it clear that he wants a new contract, stayed away from the start of workouts and isn’t expected to participate any time soon, an NFL source said. The workouts are voluntary, but the left guard was in attendance last year even though he was unsatisfied with his contract situation then and was also on the trading block. The Eagles did not offer specifics, but the majority of players on the roster were expected to be present this week. Kendricks’ absence, nonetheless, was a surprise. He had a scheduled trip to Costa Rica, according to a source close to the situation, and plans to eventually attend workouts. But the timing of his vacation was conspicuous.

The original Mama Gonna Knock You Out playa Chris Polk is skipping these workouts, too. However, with the 3-headed monster already set in the backfield – and the fact Polk hasn’t signed his RFA tender yet – says it all. I’m more interested in Evan Mathis and, especially, Mychal Kendricks being the ONLY guys on the roster not at these voluntary off season spank sessions.

It’s well known Mathis isn’t happy about his deal and there were rumblings Chip was (is?) shopping him around. I guess some people just aren’t happy playing a game for a living for $6.5 million dollars of chump change. I personally think if Kelly finds a suitable place for Mathis to be shipped, he’s gone. But even at 33, he’s too much of a talent (and cap hit) to just let go, especially when the OL is shakier than most seem to care. But there’s no doubt in my mind if Chip can trade him away for some value he’d do it in a heartbeat.

The real deal here is where the hell is Mychal Kendricks? Is he actually being shopped around? Is he unhappy with Kiko coming to town and Mufasa being resigned? Honestly, I don’t know. Kendricks is on the final year of his rookie contract and has been thrown out there in trade rumors, but that’s all speculation. But “vacation” my ass. Something stinks here and I’ll crawl up Chip’s ass myself to find out where the smell is coming from. The latest buzz going around is a Menage à Trois that, in so many variations, that would send Kendricks/Bradford/Draft Pick(s) to SD who would send Phillip Rivers (and draft picks?) to Tennessee in which the Titans would give the Eagles the next 20 or so Super Bowls with their 2nd overall pick. Again, all speculation, but Kendricks being a no-show leads me to believe some shit is gonna hit the fan in the next 10 days before draft time.

Get those pieces for the puzzle, Chip. KNOCK KNOCK: