That is Elizabeth C Turner. She has nothing to do with this blog. She just has great jams and I like to assume Lady Godiva did too, but the only visual of her tits are on this statue 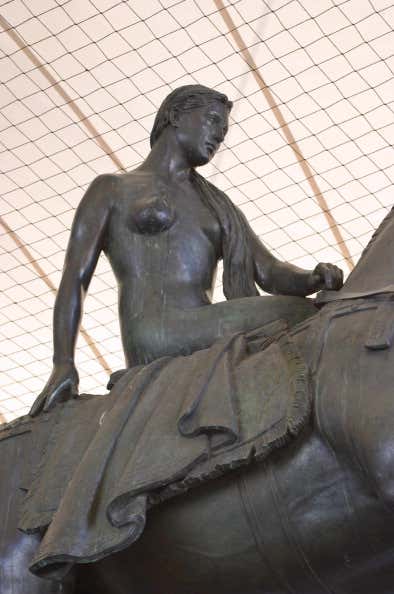 Any who, on this day in 1088 Lady Godiva rode on a horse through the streets with her tits out for everyone to see. Why? To tell her husband to stop being a bloodsucking sonofabitch on taxes. She was married to the Earl of Mercia, a man named Leofric(which is kind of a sweet name that has been left behind in history). Leofric was a major major asshole. He taxed the fuck out of his people in Coventry, England. A tyrant. It was oppressive. And according to works of art he looked like the big dude from Braveheart so nobody wanted to fuck with him

The only person who had his ear was his wife, Lady Godiva. She felt horrible for the people who she saw suffering under the heavy taxes and she would nag the SHIT out of her husband to remove tolls on bridges and taxes on his people. His answer, repeatedly, was something like

She never stopped nagging him about high taxes though. Then one day, the Earl was like "Jesus Christ. I am not fucking lowering taxes. The day you ride through the streets buck ass naked is the day I lower taxes". So then that sassy minx Godiva said "okay fine" and she stripped down and mounted her horse. She put out a proclamation to the towns people to close their windows and stay inside and so she could ride naked for the boys with only her hair covering her titties. One horny pervert disobeyed and that is where we get the expression "Peeping Tom" from. There's no word on her wikipedia page or elsewhere to confirm if the taxes were ever lowered on account of her tits being out, but the people appreciated the effort and she's been a legend for 1000 years now because of it. Has a chocolate brand and everything. Anyways...here's more Elizabeth Turner