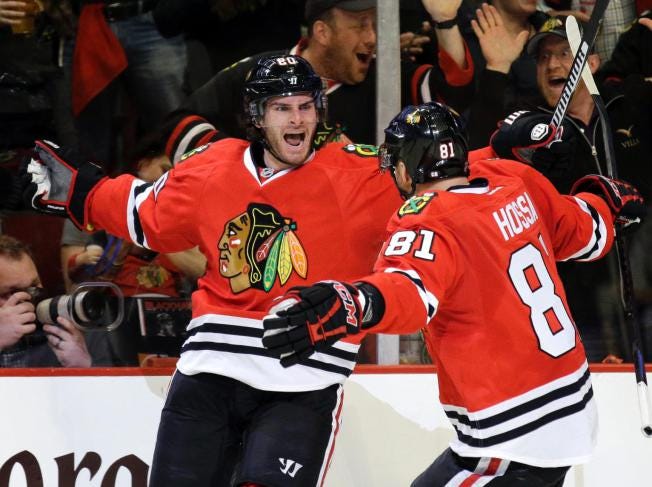 After an embarrassing Game 2 loss that led to several lineup changes and a goalie controversy, the Blackhawks bounced back on home-ice and put the Preds in their place. Even though the score never got out of hand, the game never felt close. The Hawks attention to detail suffocated the Preds in the middle of the ice. The Hawks’ team defense that was missing for long stretches in Nashville forced everything to the outside. They were so good defensively that the game was almost boring at times. The Preds are a solid team, but I am ready for this round to be over. Bring me Saint Louis or Minnesota.

–Coach Q described Darling’s performance as “rock solid” in the post game press conference. That’s exactly what it was. Darling made all the saves you would expect him to make and a couple on Grade-A chances. Darling was good, but that was a total team effort. You could have put a shooter-tutor in net and the Hawks probably still win that game. I think a win and a strong performance means Darling gets the nod again in Game 4(this is now official. Darling is the starter), but my gut says that we see Crawford again at some point in the playoffs.

I talked with Brent Sopel yesterday about this dynamic and about the makeup of these two guys. I asked Sopel if he thought Crawford would sulk about losing his job. I got an emphatic “no” from Sopel. He said that Crawford was a great teammate and that he would help the team and Darling anyway he could. This image post game looked genuine to me. 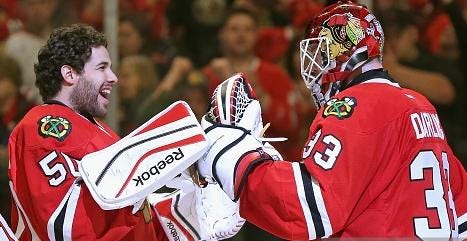 Credit to Crawford for being a stand up guy in a difficult situation.

–After Game 2, I wrote that I not only wanted Rozsival scratched, but that he should also be euthanized. Well, he pulled his foot out of the grave yesterday. Really solid performance. He played the majority of the game with Duncan Keith, which will always help cover some mistakes, but Rozsival was barely noticeable out there and that’s a good thing. Almost 20 anonymous minutes that saw the Hawks control possession. He played within himself and within the team structure. A shocking turn around considering the performances in Nashville and the boos he received at Chicago during the starting lineups. If he does less consistently, the Hawks will be just fine on the back end.

–Coach Q inserted Andrew Desjardins into the lineup and he delivered big time. He scored the first goal of the game, but he was an animal on the forecheck. Officially he was credited with zero hits, but he was nails to play against. Wining board battles, pressuring Nashville defensemen. He brought an element of sand that was missing from the 4th line when Turbo and Nordstrom were in the lineup. Vermette was also inserted into the lineup. Playing with Sharp and Bickell for the most part. I thought he was solid, but that line definitely had more juice when Shaw was on it.

–The Saad-Toews-Hossa line is the best line in hockey right now. They’re causing turnovers and creating chances. They carried the Hawks yesterday. This line is so special because they dominate every inch of the ice and every situation. Look at this snap shot 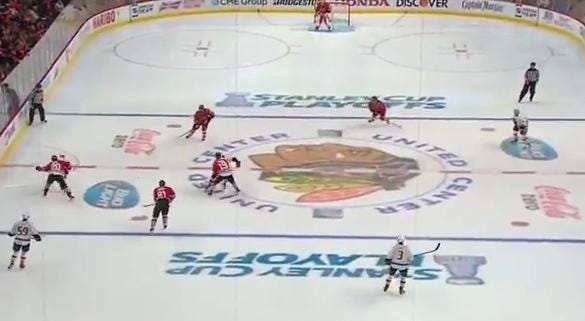 Saad his all over the guy on with the puck. Toews is taking away the middle of the ice.  The D have perfect gap control. The Preds have the puck in transition and they have ZERO options because 20, 19, and 81 are relentless defensively. This defense eventually led to the Toews’ goal.

Losing Weber was essentially a death blow. The Preds missed him in all situations yesterday. At 2-1 this series feels like it’s over. As long as the Hawks are committed defensively and are getting solid goaltending they’re going to be nearly impossible for the Preds to beat. Nashville has had a great year, but they’re a couple years and a couple high-end players away from being a true Stanley Cup contender. They’re going to need Rinne to steal a game to extend this series beyond 5 games. I’m trying hard to really hate Ribeiro, Gaustad, and Neal, but they’re all so ineffective that I can’t. I need Backes, Ott, and Jackman and I need them now. I need real venom to feel alive, and Nashville just isn’t doing it for me.