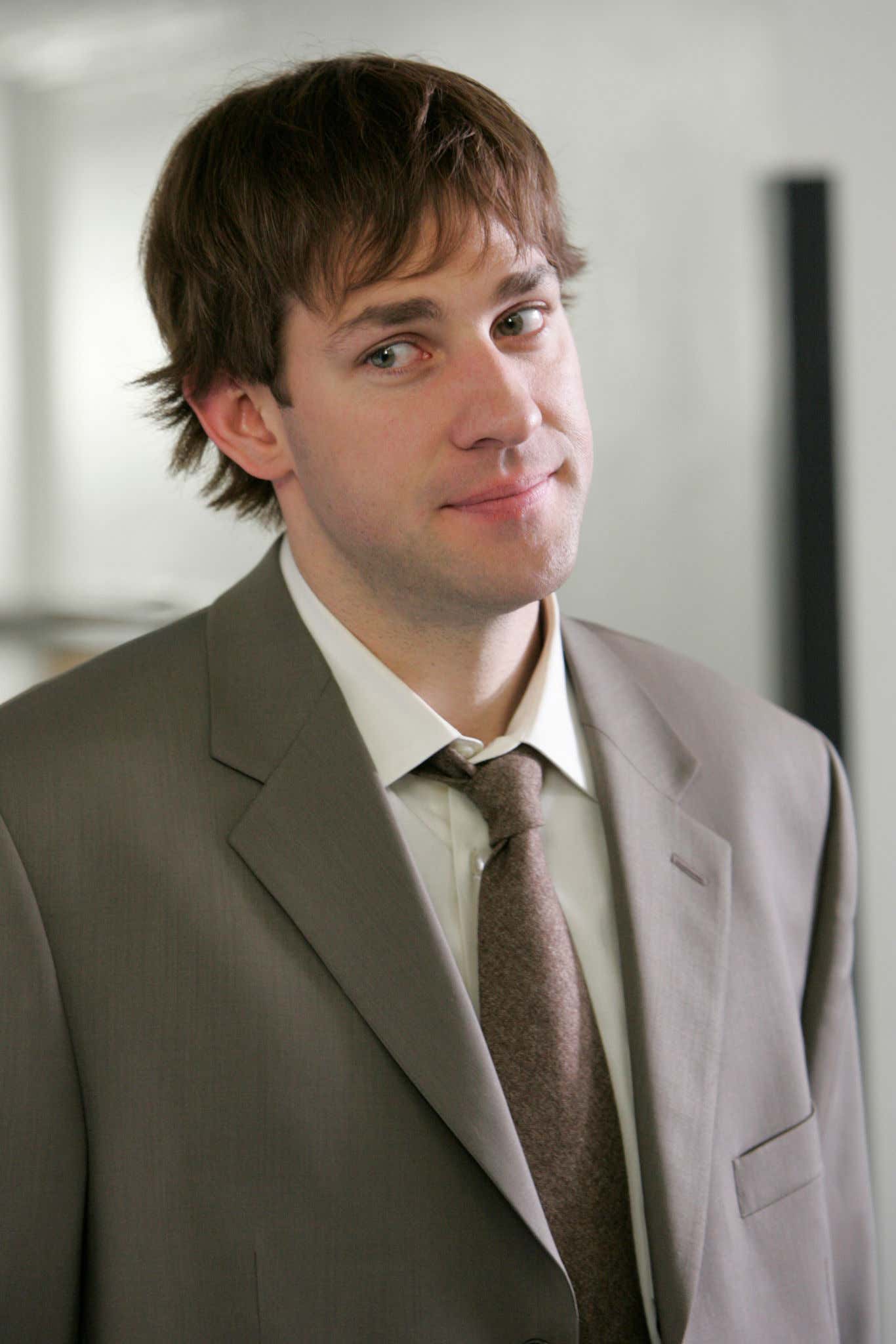 It was the shag that made Jim Halpert famous. Just as women in the 90s walked into their hair salons and asked for "The Rachel," men in the 00s asked for "The Halpert," a floppy, wingy cut that intimated exactly zero people and let the world know this man doesn't take himself too seriously. 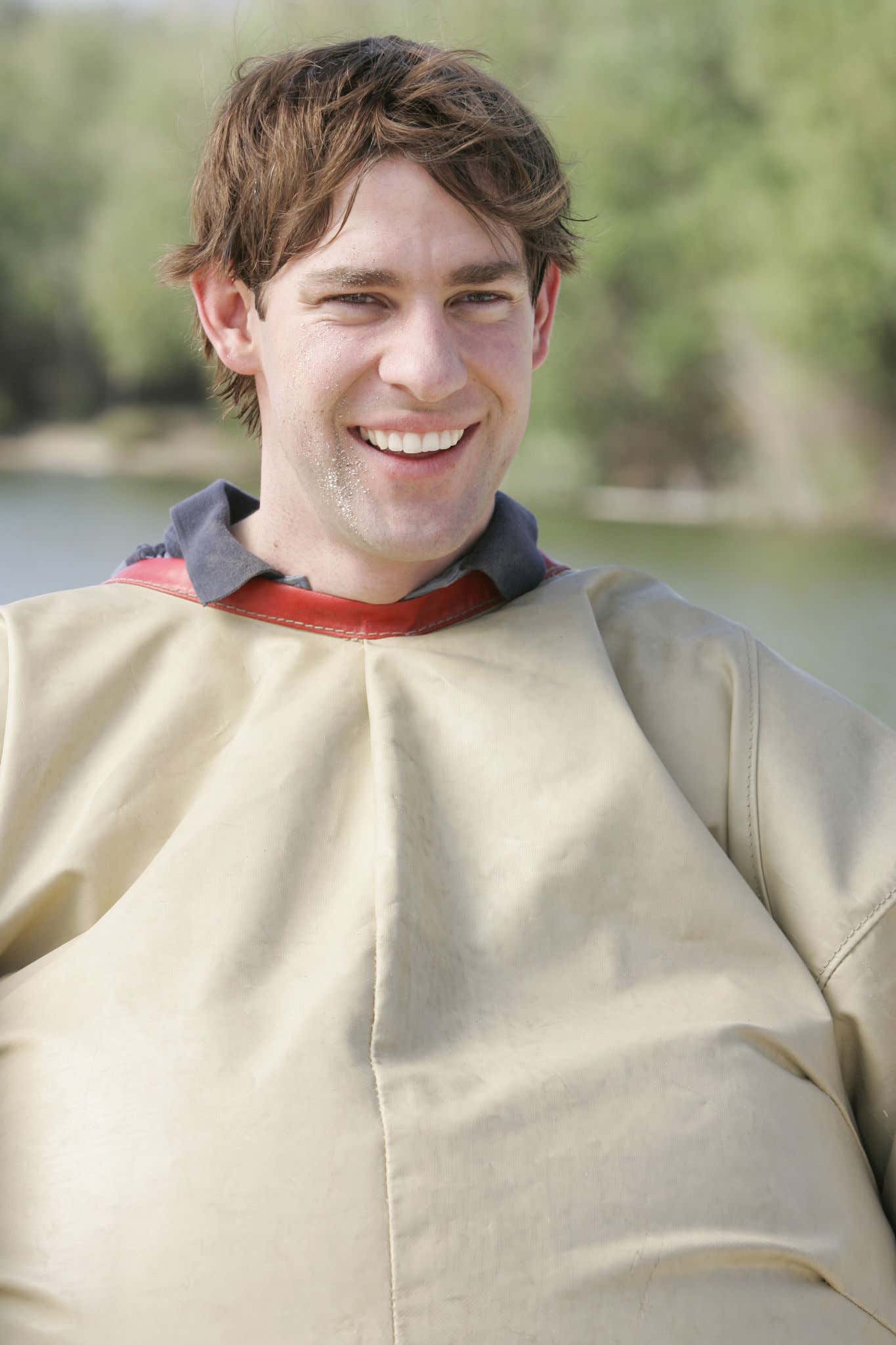 Now I don't know if any of the above dramatics are actually true, but his hair was important. So important, in fact, that when John Krasinski was up for a role in Leatherheads during season 3 of The Office, Greg Daniels (The Office's showrunner) told him to turn it down because it would force him to cut Jim Halpert's famous locks and that simply wasn't an option.

Unfortunately for Krasinski, NOT starring in the critically-acclaimed Leatherheads was also not an option. (credit: Mashable)

Rather than turning down the role, Krasinski went to [Kim M.] Ferry for help, and the two teamed up for a top-secret wig operation.

By now most people know he wore a wig during the taping of season 3, but I definitely didn't know about the drama behind the wig. I mean, imagine going against your contract AND boss of the show that made you famous, and risking it all for... Leatherheads???

“It bombed and when I say bombed, it bombed. Someone said, “How does that feel?” and it stings a little bit. It’s not like we just showed up: I was working on this for a couple years and put a lot of work into it, and you get knocked back a little bit.” - George Clooney to Rolling Stone

To be fair, it's George Clooney. Everyone wants to work with him and no one, Krasinski included, could have known the movie would only bring in $31.3 million at the box office. You just can't predict that level of stink. The only thing John knew was that he had to be in the movie at any cost.

Ferry [hairstylist for The Office] recalls Krasinski coming to her with his dilemma, and though she felt she was putting her job on the line, she said yes.

"He paid for the wig — a human hair wig made by a friend of mine, Natascha Ladek, who's the best wig maker in town," Ferry said. "She came in to do a secret little fitting for him, she made the wig, we got it, and it looked amazing. [Krasinski] came in a little later that day and I had the wig hidden in a little secret spot ready for him. When it was just him and I, I put it on him, and then he went out and filmed."

This poor woman. It sounds like she wanted to say no, but couldn't because she felt obligated to help. Instead, she ended up nervously hiding secret wigs, praying the higher-ups wouldn't find out and fire her ass.

Not to worry, her and John had a plan and as long as they followed the plan, everything would be ok.

Instead of following the plan — which was to wait until the next morning to reveal the Halpert hairpiece — a wig-wearing Krasinski drove straight to Daniels' office after shooting and made his case for starring in Leatherheads again.

"I very crazily and nervously grabbed my bag and jumped in my car," Ferry recalled, explaining that she followed Krasinski to Daniels' office as soon as she learned he'd left. Once she arrived, the door was closed, and she was told that Krasinski was already chatting with Daniels and Zbornak.

I love John Krasinski… but this is a total dick move. This gal put her job on the line to do YOU a favor and this is how you repay her? By going behind her back and doing whatever you want to do, whenever you want to do it, without even telling her? Yeah, that's shitty.

While she nervously waited for an update, B.J. Novak walked over to her and said, "Hey Kim, is this about John's wig?" Ferry was terrified that Novak and the rest of writers knew about the stunt she and Krasinski had pulled, but before she could come clean, Novak said, "Well, I've gotta tell you… I just saw John and I feel like we're gonna know if it's a wig or not."

Just then, the door opened and Ferry was summoned into Daniels' office. "I literally turned to B.J. and said, 'It was nice working with you BJ,' and I see Greg sitting at his desk, and John is kind of sitting next to him, and I see the wig off sitting right in front of Greg," she said.

"The first thing Greg said was, 'Wow. You guys have balls,' and then goes, 'but I have to say I didn't see that coming.'"

Ferry explained that Krasinski had walked into the office with the wig on and pitched all the reasons why Daniels should let him wear one on the show.

"Greg kept saying, 'No! I would know if you're wearing a wig.' So John leaned over the desk and said, 'No I don't think you would.' That's when he ripped it off and shut it down, and we got to do the wig."

All's well that ends well I suppose. Everyone kept their jobs, we were blessed with more Jim Halpert, and Greg Daniels received karmic satisfaction he didn't even know he wanted when the movie he was undermined for, failed.