Quarantine has been different for everybody. From a New Yorker spending their days in their cramped apartments to Floridians acting like nothing is happening. Mine meant spending the  time in my home state of West Virginia. While most people think time spent in the Mountain State consists of white water rafting, taking in nature, hoping what you purchased is actually Percocet, and ignoring basic dental hygiene, what it meant for me was spending every waking moment quarantined in the 1960’s, modest, split-entry, childhood home of Kyle Bauer, or as he is known professionally, KBnoSwag.

Considering this previously empty house had no internet, conversation was necessary; not only pass the time, but to stay sane. As I would open up about my past, talking about everything from girlfriend's who've cheated on me with complete strangers to girlfriend’s that’ve cheated on me with people I’ve been close with my whole life.

Sitting there, waiting for a well thought out response, or an equal intimate look into his own past, Kyle would typically respond with something like, “Did you know the only 2 countries that have purple in their flag are Dominica and Nicaragua?”

An impossible egg to crack. I’ve been working and living with him for months and the only thing I knew about him was his love for shoe store's (always walking around mumbling about wanting to "Finish Lines") and United States Exclaves (when a small piece of the state is completely surrounded by other states), his favorite being the Kentucky Bend. 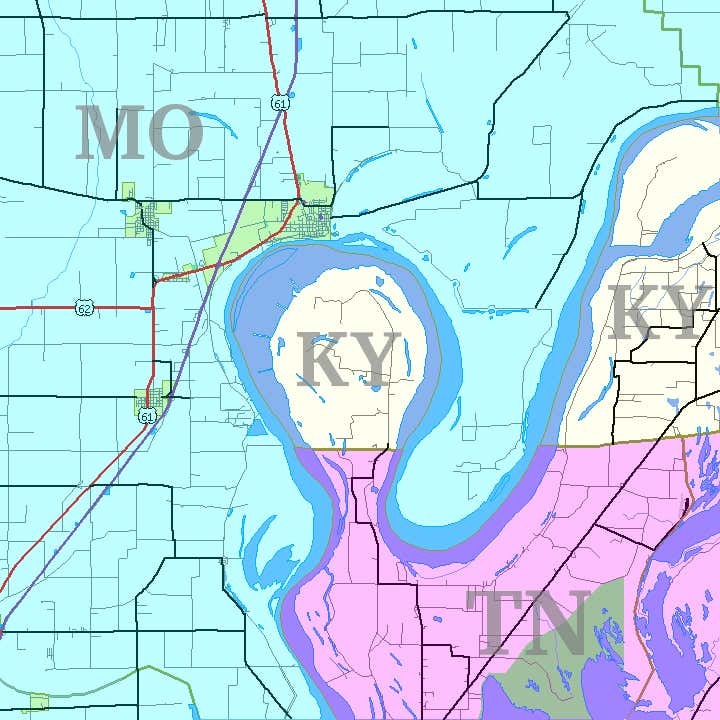 Days turned to weeks, and weeks quickly turned into months, and I still knew nothing about him. I had all but given up hope, that was, until one mild June evening. As we were sitting on the deck eating the last of the lasagna his mom left us in the freezer, known for its patented “very bad taste”, I brought up the act of writing blogs, something that I am very new to. KB, admittedly, is a FAR superior writer, and I wanted to pick his brain for any tips. At that moment his ears perked up, and I knew I may have finally struck gold. KB assured me that writing would gradually become easier and easier, and that he had been composing stores for almost two decades. His original short stories still lived to this day, in a grotesque rubber covered journal, purchased from the 2001 Scholastic Book Fair that he deemed his "Goblin Journal". 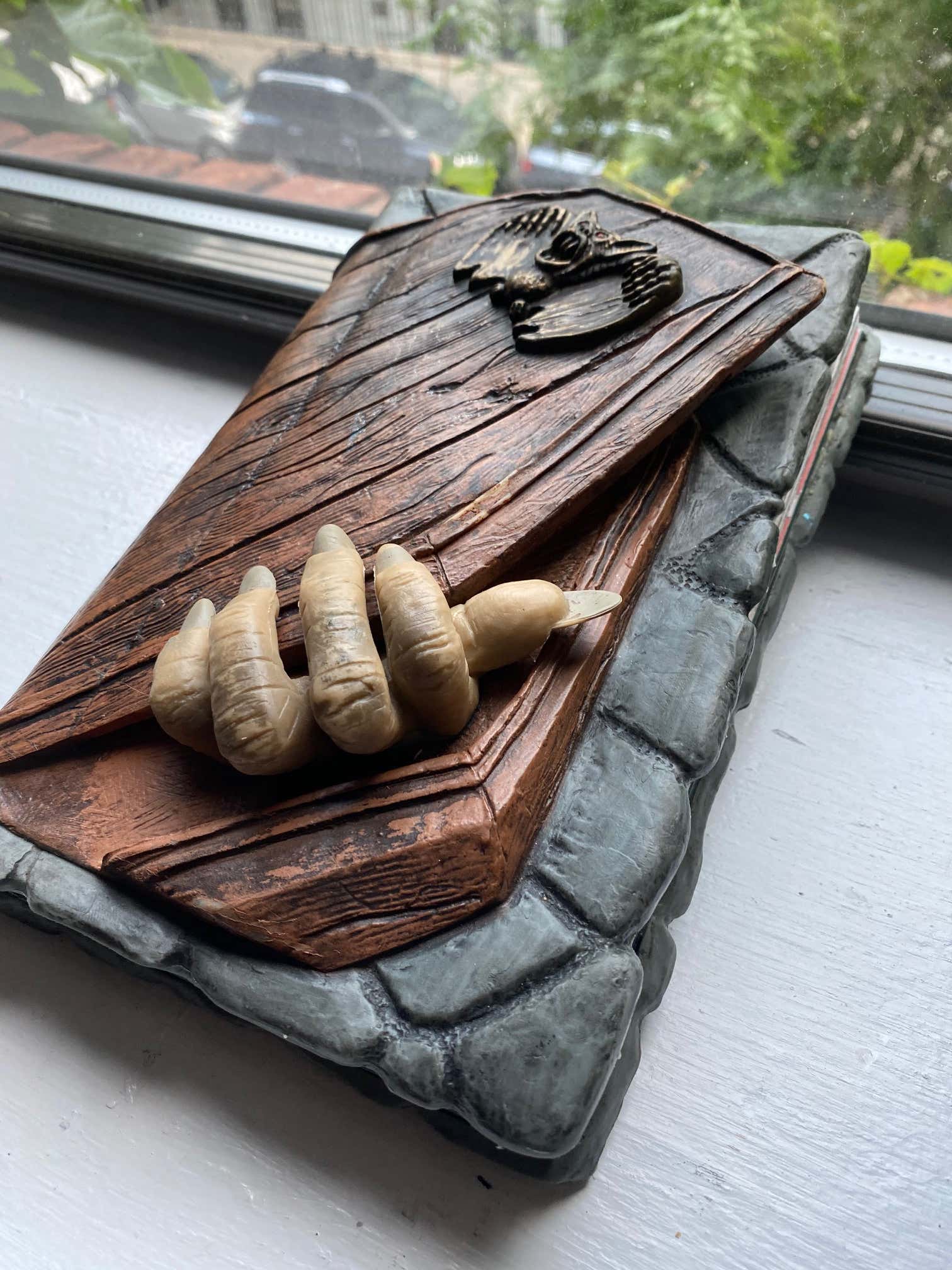 This mysterious horror-themed book had me more curious than a West Virginian Catholic school boy in 1999 seeing the Livin' la Vida Loca music video for the first time. KB amicably gave me the go ahead to flip through and see his early work.

The first page made it seem like the original intent of the Goblin Journal was to act as a diary; a way for young prepubescent Kyle to therapeutically jot down his thoughts. Unfortunately, some sort of major event must have happened, because after this first entry, the book devolved into a works pure fiction, an escape from reality. 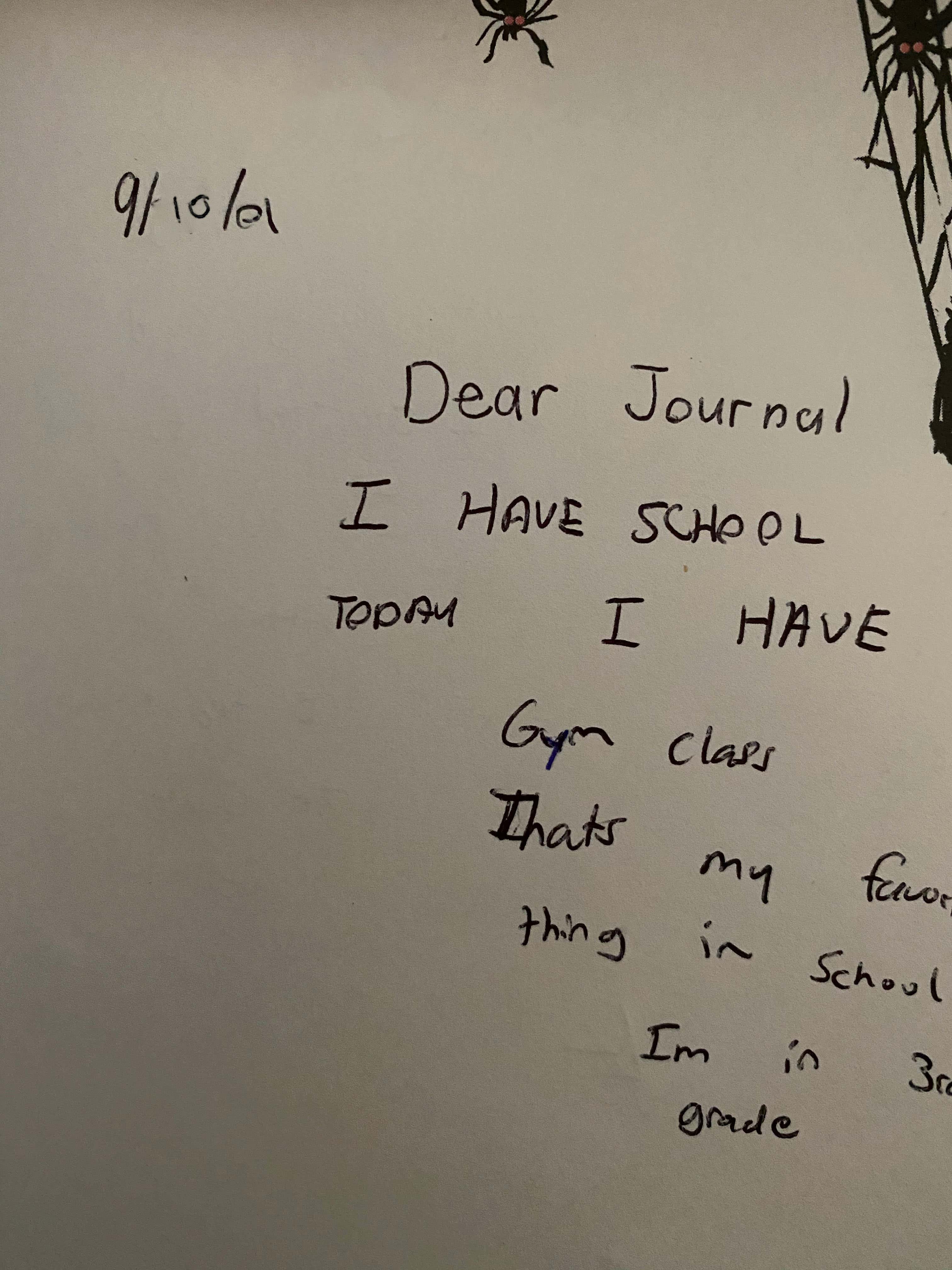 Not to be selfish, I felt it is my moral responsibility, after KB graciously offered me his home, to steal this sacred and personal item of KB's, and share it with as many people as I could, giving everybody the chance at an intimate look into the life and mind of Kyle Gregory Bauer.

The following are some of my favorite experts from the Goblin Journal. 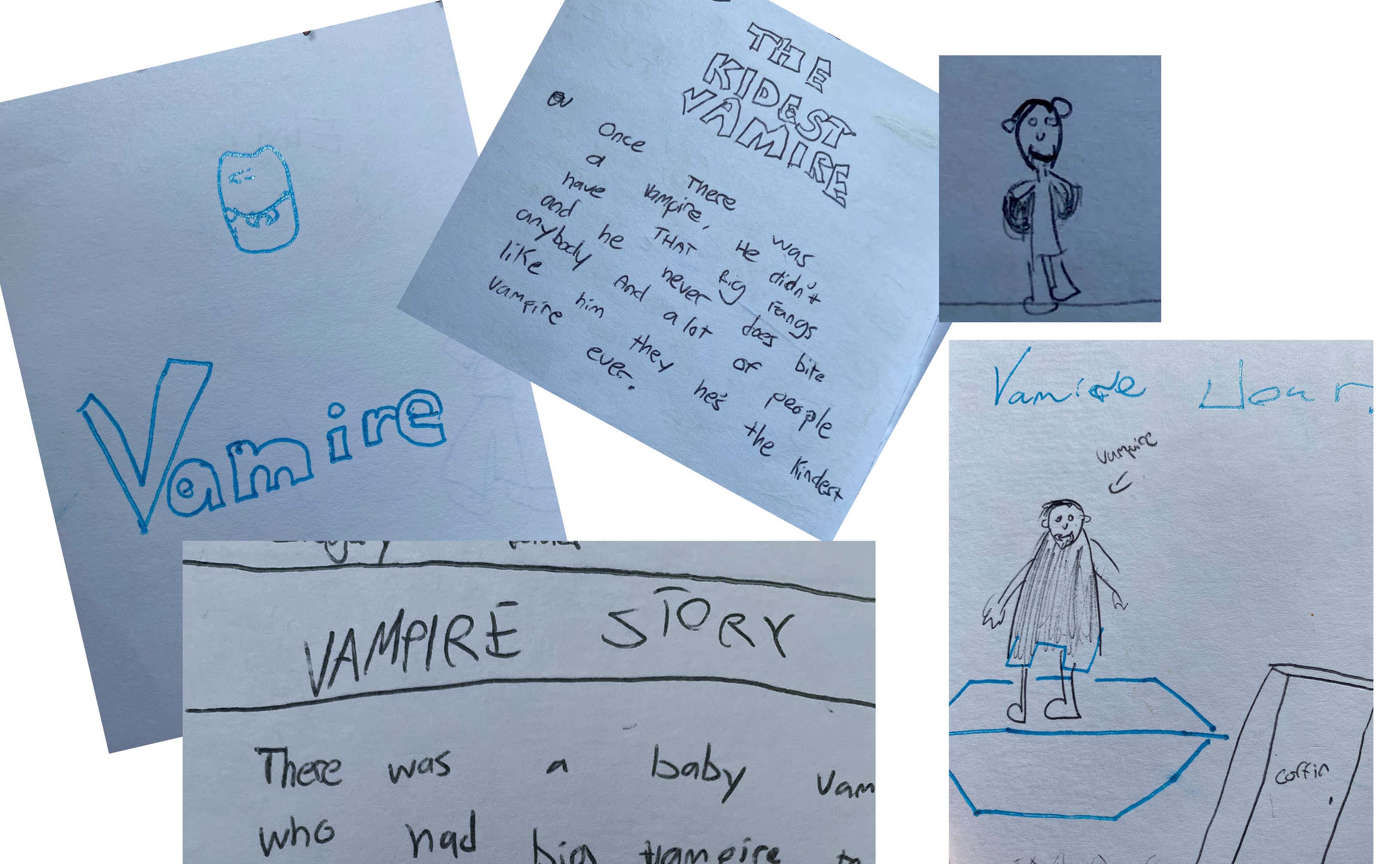 About 60% of the Goblin Journal is filled with drawings, stories, and spelling errors of vampires. This finding actually left me with more questions than answers, like:

There is zero note of any goblin in the entire book.

Hackysack is the perfect game for when you have no friends and also a hackysack. When you have all of the time in the world, you begin to challenge yourself, and learn what attire you perform best in. 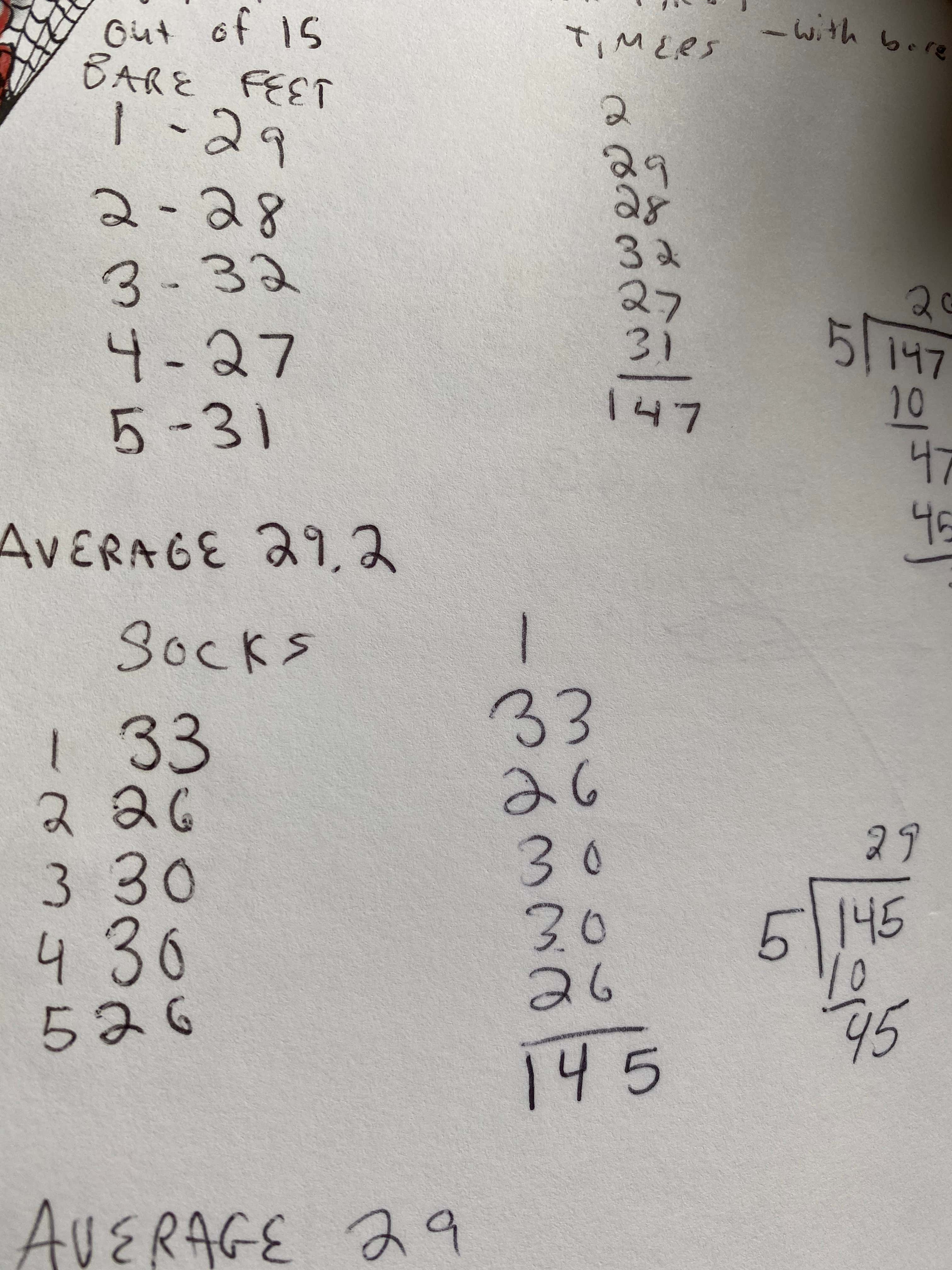 As I suspected, '01 KB was a phenomenal sacker while in his size 5 Etnies, but when it came to barefoot vs. socked, it made no real difference. 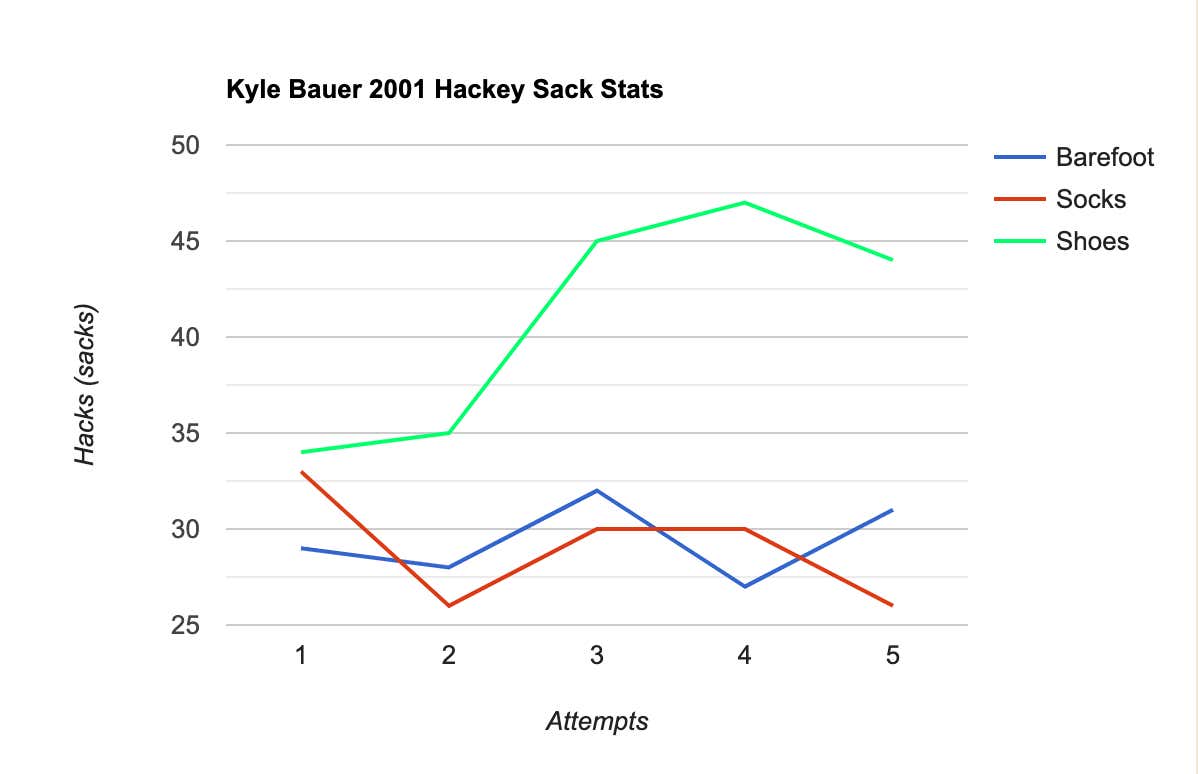 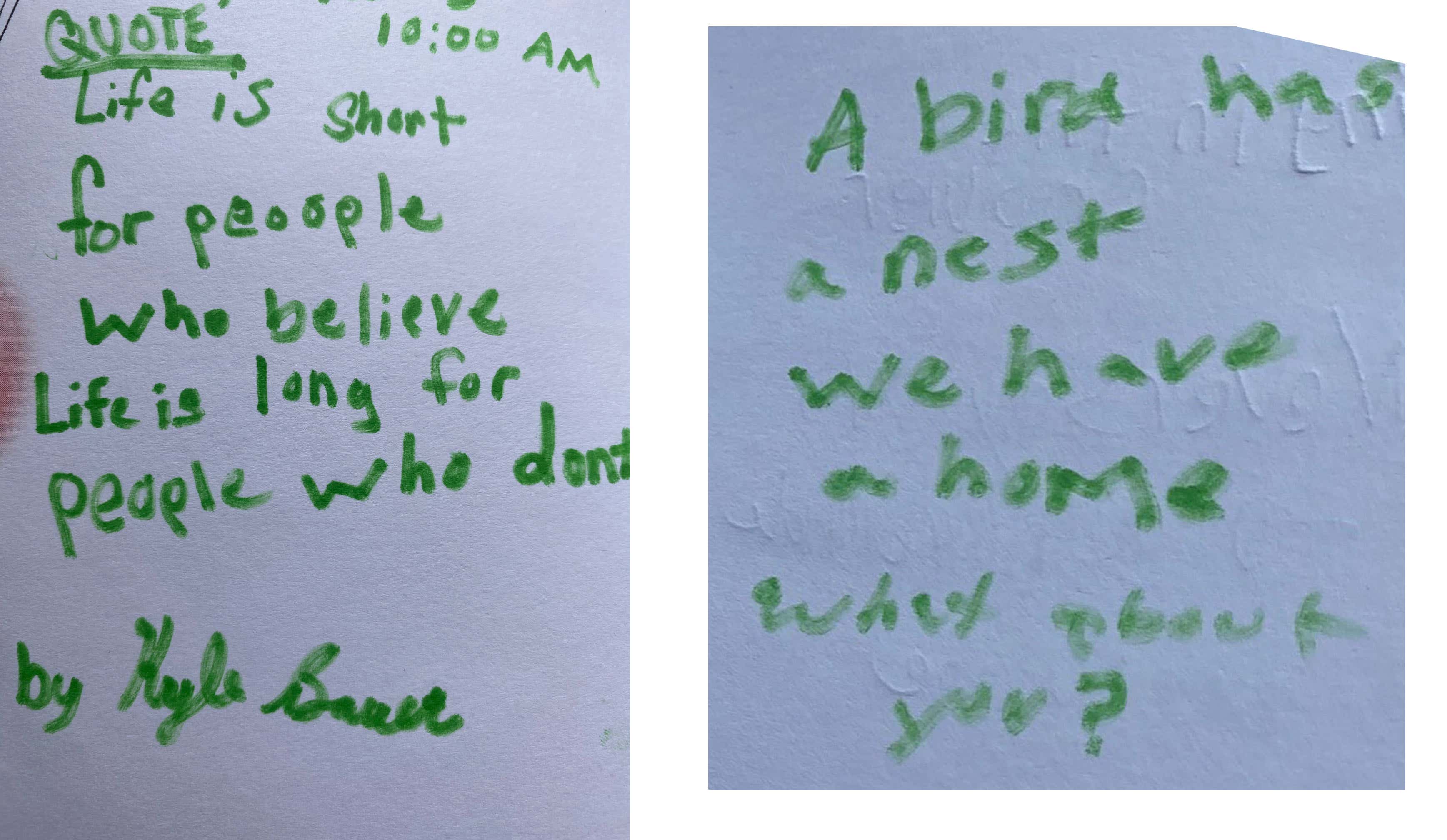 A bird has a nest. We have a home. What about you?

What about you? This deep look into human ideology, on the surface, may just be the 10 a.m. ramblings of a boy with a growth hormone deficiency, but they read more like a Rupi Kaur poem than an actual Rupi Kaur poem. So much in fact, a pseudo intellectual, VSCO scrolling Alpha Phi wouldn't bat an eye if they saw this amongst the other poems of their copy of Milk and Honey that they leave at the edge of their coffee table to impress their sisters. 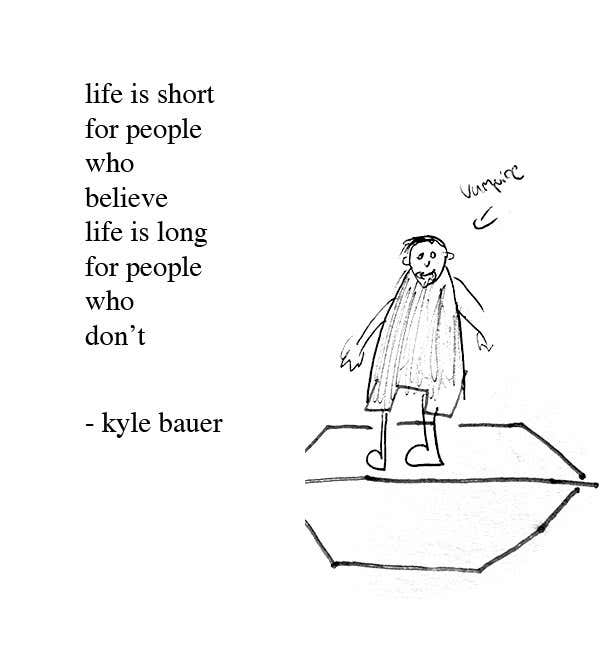 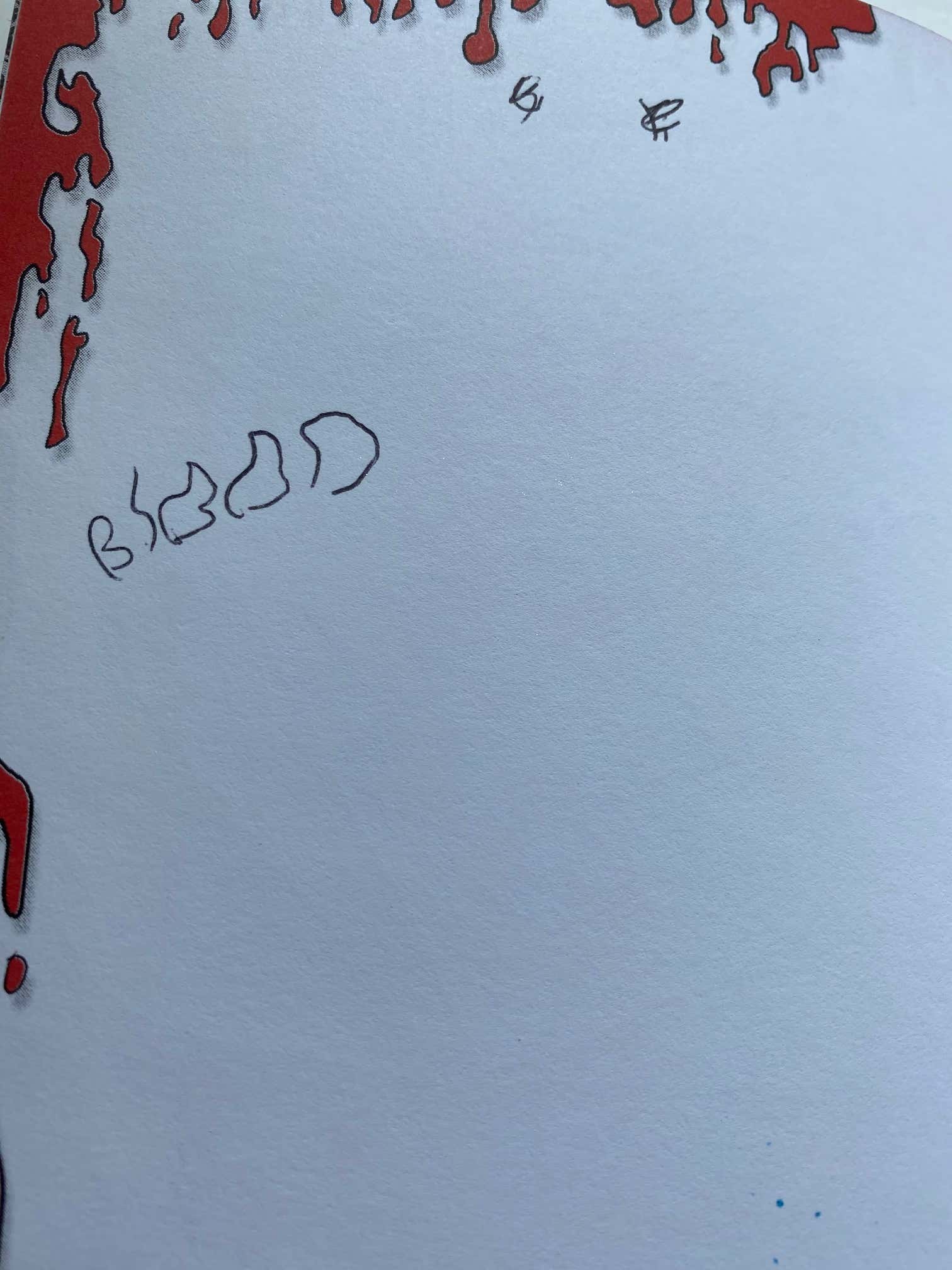 Towards the back of the book, young Kyle gave some tips for a happy successful life. They started off pretty reasonable. 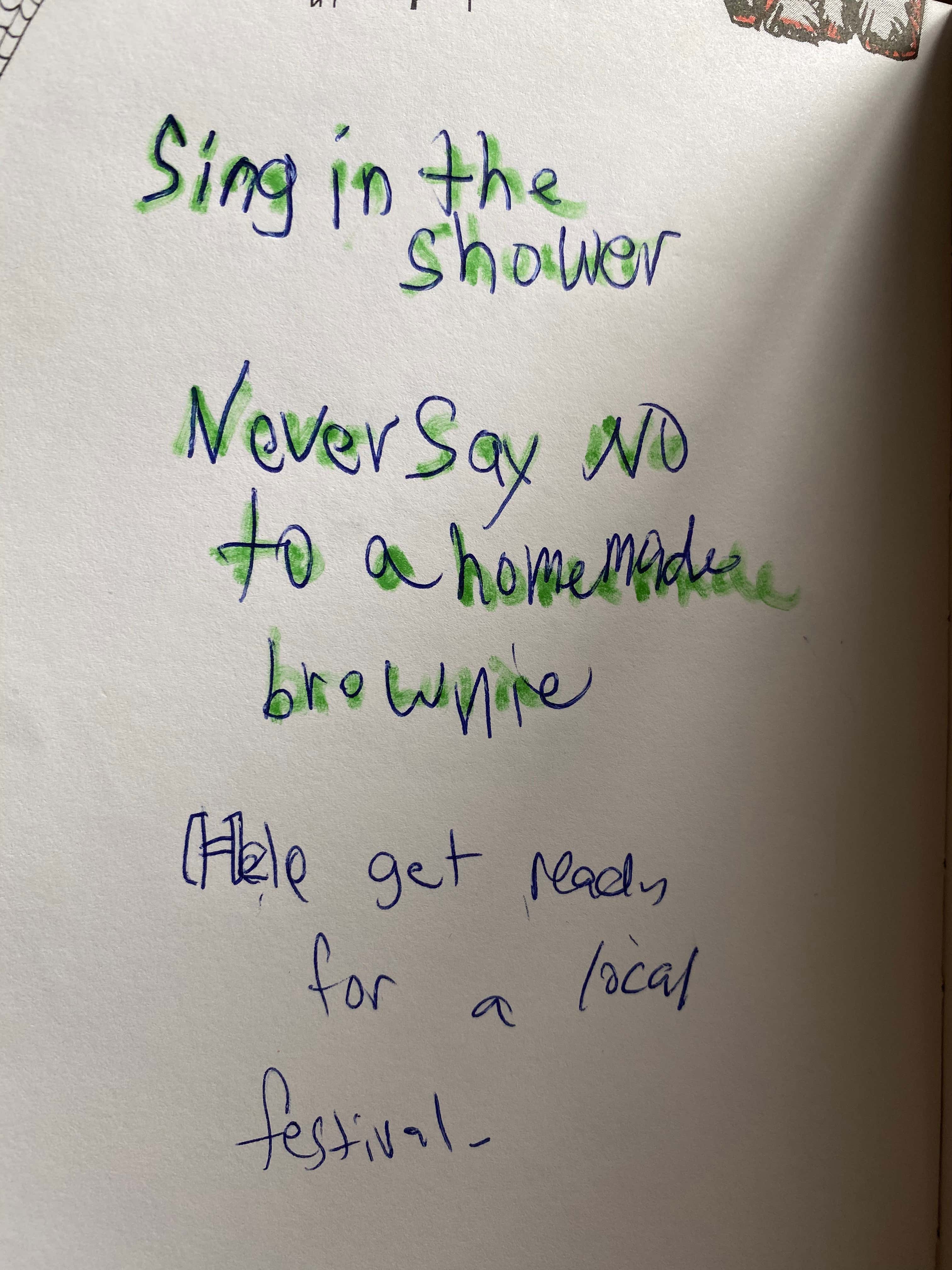 All sound advice. But this was just the first page.

The second page had a rule that...was concerning. 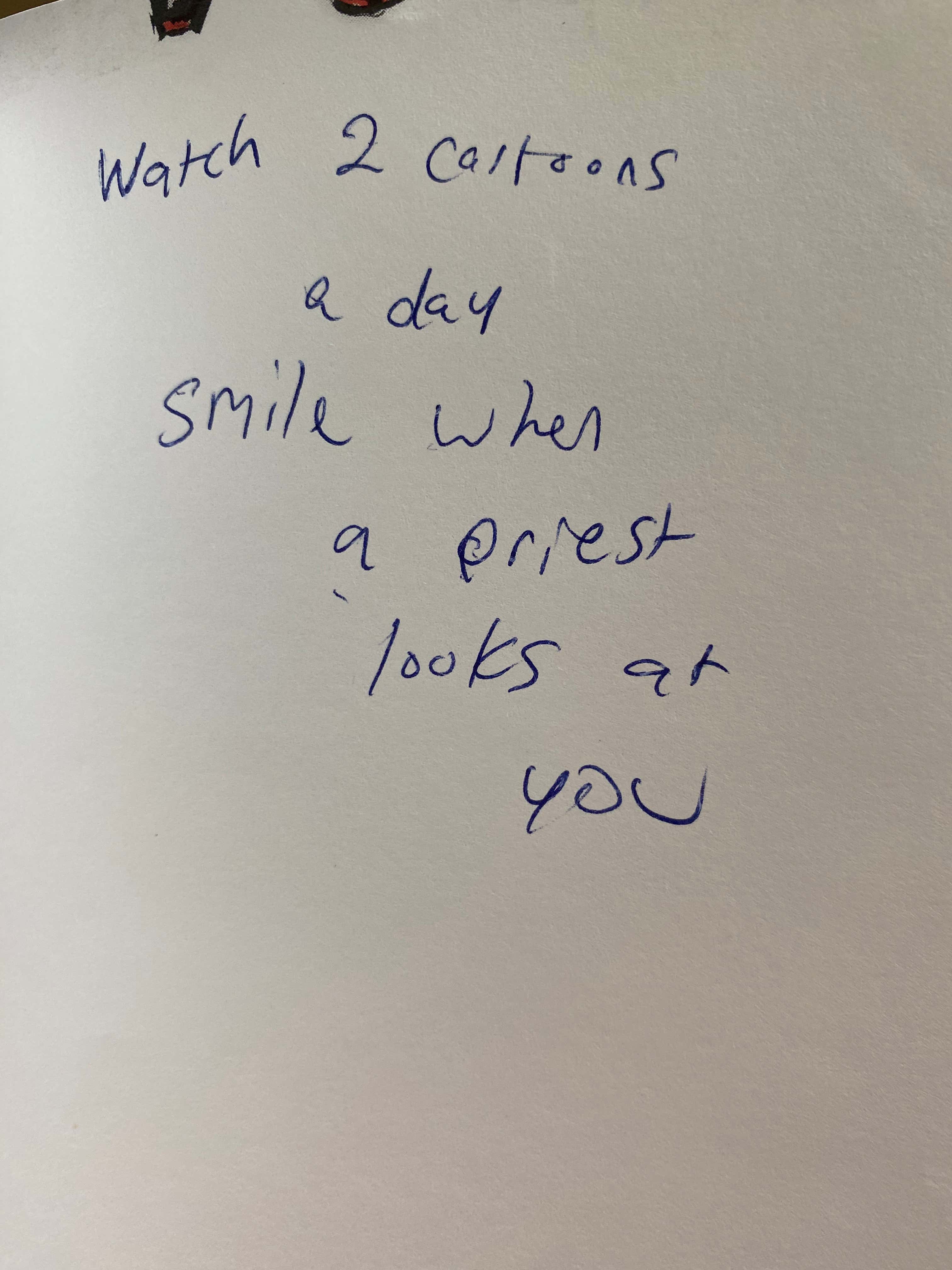 TWO cartoons a day?? Including commercials, that's an entire wasted hour every single day. An hour that could be spent making homemade brownies, or smiling at Father Martin.

The last page was where Kyle really opened up. Became vulnerable, and revealed his biggest fear. 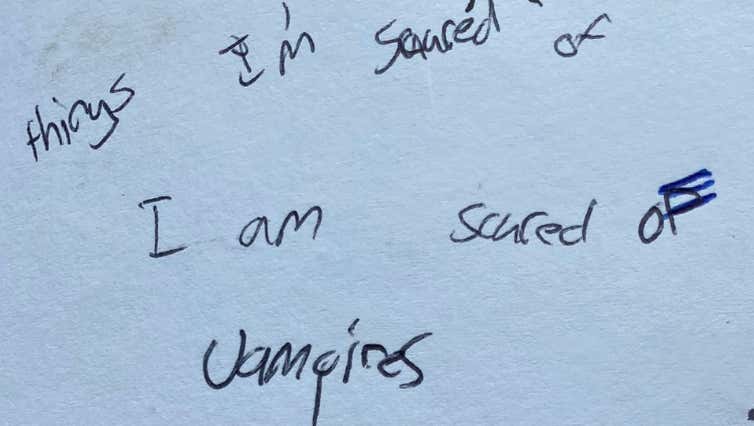 Vampires. Fucking vampires. In a Shyamalanian twist, KB has been projecting his biggest fear in the world throughout the book. Perhaps in a way to overcome the fear.

Regardless of the reasoning, I feel like this sneak peak into KBnoSwag's "developmental" years has not only made me closer to him, but also fills me with a fear greater than a peewee wrestler seeing a Count Dracula.

For those who gets uncomfortable around KB (new Barstool new hires, parents of Kyle), feel free to print and use this wallet sized cheat sheet. If you get stuck thinking of talking points when attempting to converse with the man himself. 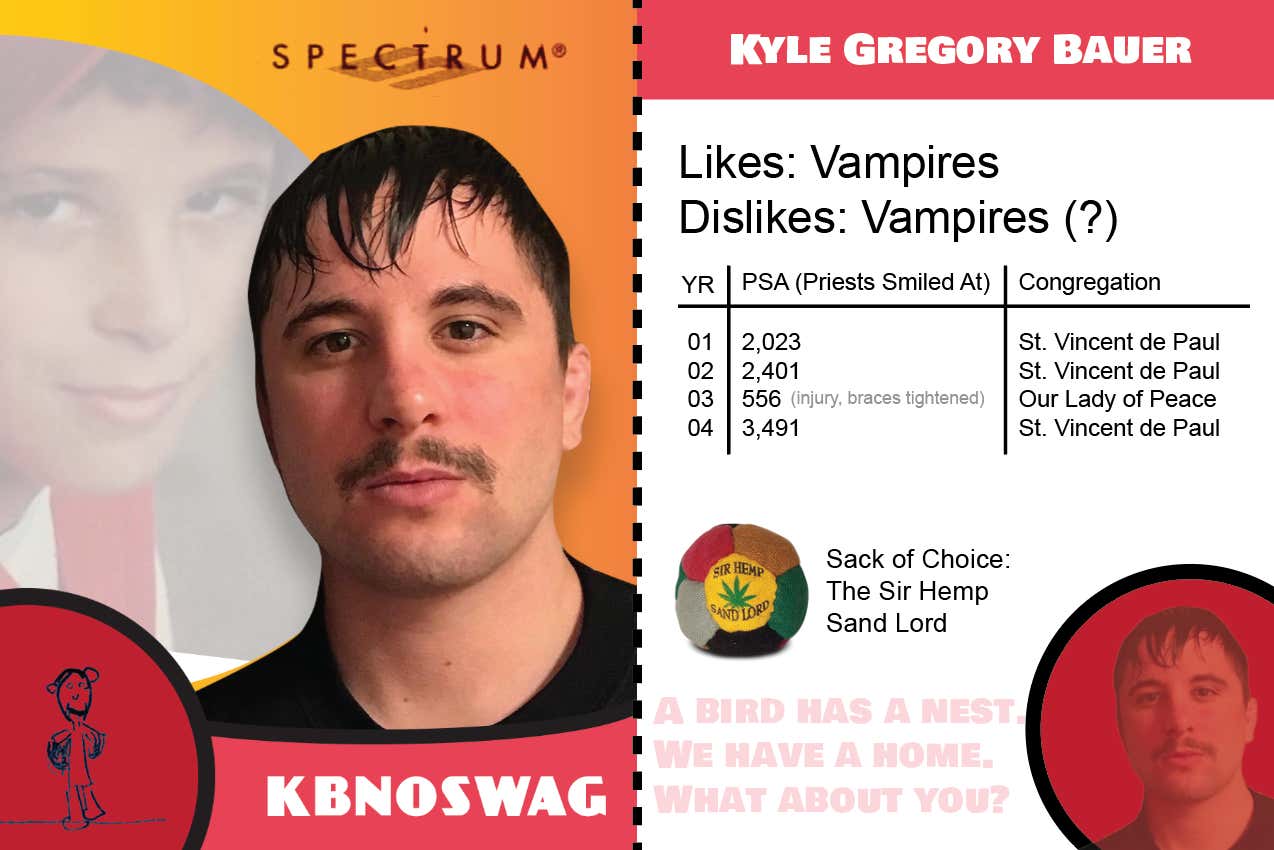