I'm sure you remember Ben Bartch's viral smoothie from the NFL Draft. Due to the outrageous combinations, it was seen (rightfully so) as an outlier. The calories in it though? That's an everyday thing for offensive linemen across the NFL. We often forget the big men up front put their bodies (and toilets) through hell to make sure they are the 320-pound monsters on Sunday afternoon.

In a recent article from E***, former NFL OL detailed their diets while they were playing.

Lunch? Perhaps pasta, meatballs, cookies "and maybe a salad, great, whatever" from the team cafeteria.

For dinner, Thomas could devour an entire Detroit-style pizza himself, and then follow it with a sleeve of Thin Mint Girl Scout cookies and a bowl of ice cream. And finally, he would slurp down another protein shake before getting into bed.

A quote from Thomas:

"If I went two hours without eating, I literally would have cut your arm off and started eating it," the former offensive lineman said. "I felt if I missed a meal after two hours, I was going to lose weight, and I was going to get in trouble. That was the mindset I had. We got weighed in on Mondays, and if I lost 5 pounds, my coach was going to give me hell."

Gross, for example, ingested an enormous amount of protein each day while playing, including six pieces of bacon, six scrambled eggs, two 50-gram protein shakes, four hard-boiled eggs and two chicken breasts -- all before 2 p.m. in the afternoon.

So at the end of each day in training camp at Wofford College, Gross counted to 15 one-thousands on the soft-serve machine, then blended that with four cups of whole milk, plus three homemade chocolate cookies (which Gross believes were about 850 calories each) and Hershey's chocolate syrup. "That's all inflammatory foods, like sugar and dairy," he said, "I'm not going to say it's horrible; it was pretty awesome to eat that stuff. But you're putting so much demand on your digestive system. I always had gas. I always had to use the bathroom. I was bloated because I was so full all the time."

Chris Bober, a former New York Giants and Kansas City Chiefs lineman, showed up at the University of Nebraska-Omaha at 225 pounds, which was too small. He ate everything he could get his hands on, which was difficult as a college student "who was pretty broke." It was especially challenging over the summers, when he inherently burned calories at his construction job. If Bober went to Subway, he wouldn't just buy one foot-long sub -- he'd get two. At Taco John's, his order was a 12-pack of tacos and a pound of potato oles, which adds up to a nearly 5,000-calorie lunch.

Bahahahahaha, imagine downing a 12-pack of tacos (sober) and then adding another pound of potato oles on top of it. That's just for lunch too!!!!

Here is a look at his in-season diet compared to what he eats now post-retirement: 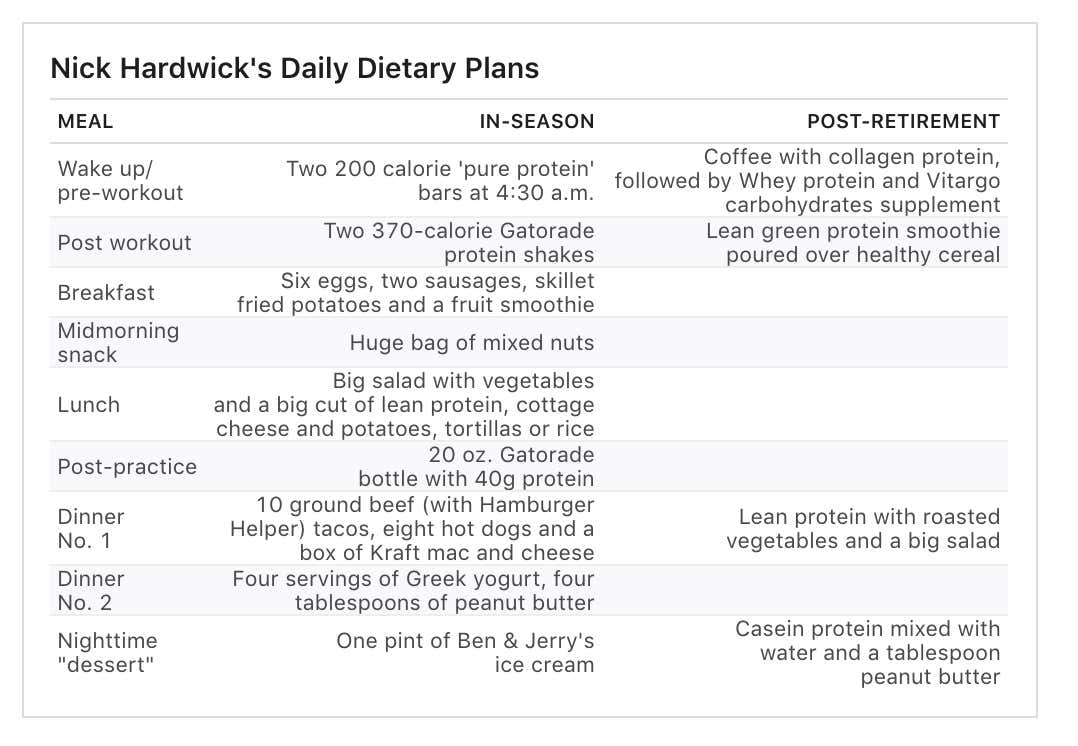 Yeah, it sounds great in theory that you get to eat a full pint of Ben & Jerry's ice cream every night. However, if you've ever tried to gain weight (this mostly happens in high school for athletes), you know the joy behind eating all the time fades away reallllll fast. You don't even want to look at food. It becomes a chore.

All of the players mentioned in this article have really slimmed down. I'd say all of them have lost over 100-pounds. These players get paid quite well for their services, but the fact we as a country obsess over a game that forces players to gobble down 5k calorie lunches will probably be laughed at in 100-200 years….if humans are still around then.