MLB released the schedules of their 60 game season yesterday, and I have a few #takes I'd like to get off my chest now that it looks like we're going to play a handful of games before someone gets a bad case of the Rona and we're all back to where we started: without baseball. But, for all intents and purposes of this blog, we're going to assume that we do get a "full" slate of games in.

Holy Hell, if there was ONE group of people happy about this pandemic, it'd be the Houston Astros. 8-9 months ago we were talking about how they were public enemy number one for their trash can bullshit, but that NOBODY in the national media is really talking about them anymore and how they're the most universally hated, scumbag team in baseball.

Well I will make it a point to be the "people don't forget" guy because I want to see heads roll, hypothetically speaking of course. I'm sure Hubbs will get in on that too. FUCK the Houston Astros. Cheating scum. It's a damn shame their won't be any self policing in the game this summer due to new "social distancing" rules that heavily penalize teams for engaging in "fights" aka a bunch of "hold me back bro!" hubbub.

Really sucks that they're somewhat getting off Scott free, but whatever. They still have to live with themselves. Oh and people also don't forget that I called this whole thing a year in advance:

Call me a moron all you want but I can sniff that kinda shit out with the best of em. Wish I had other talents but this suffices. Oh, and the Astros have to travel a LOT this summer:

With only 6 off days in this 60 game sprint, that's a TON of travel. Whatever though. Fuck'm.

Lots of nights sleeping in their own bed. Can only help. Not saying that will equate to more wins, but I cannot hurt whatsoever. Travel is mentally draining, so the less a team has to be dealing with planes and packing and luggage and sitting in chartered planes, the better. Not saying there will be a direct correlation between the amount teams travel and the amount of wins they have, but it has to equate to *something* in this weird year.

Speaking of Chicago teams, the Cubs and Sox are *officially* Rivals:

I don't understand why people say that the Cubs and Sox aren't rivals. They compete for eyeballs, money, fans, viewership and a LOT more. Just because they only play each other 4-6x a year doesn't mean they're not competing in other ways. Sox fans hate the Cubs, Cubs fans are worried about what should be a Sox resurgence starting this year. Sure, in normal years its more important to beat the Twins or Tribe, but this year that ain't necessarily the case.

Well now they're playing each other for 10% of their schedules and end the regular season with a 3 game set that could very well be must win, do or die series for both clubs. So yeah, they're officially on the field rivals. It would be sweet poetic justice if the Sox won the division while simultaneously knocking the Cubs out of the playoffs in late September.

But the Sox need Moncada and Kopech to be healthy:

I don't know the first thing about why Kopech hasn't reported and I'm not going to begin to speculate. There are a million rumors going around and none of them are bred from fact, at least not that I'm aware of. Whatever it is, I hope his mind is in a good spot and when he does report he hits the ground running. The Sox have been waiting 2 years to deploy what could very well be a front of the line, top of the rotation, grade A ACE on the league again, but for whatever reason he's not in camp. Let's hope it's nothing too too too serious and he's back soon, because he's an absolute X factor for this team this year.

...by drunkenly shitting on a dude that's been a guest on your podcast and go out of your way to piss off someone you've been in business with for many years AFTER asking your partner to not publicly shit on the Cubs anymore because you wanted them to tickle your balls with some access. Not a good look and can only hurt your podcast.

Moncada? He's another story. He's not in camp and all signs point to the Rona. I said I wouldn't speculate on Kopech because there's nothing to base speculation on aside from him not being at camp. Patrick Nolan said it best regarding Yoan:

I don't know if being asymptomatic just means the symptoms haven't kicked in yet or you won't get it at all and is just carrying the virus, but he needs to flush this shit out of his system NOW. Yoan is a player that needs to stay in a rhythm as much as possible or he'll revert back to bad habits like taking too many pitches and getting himself into pitchers' counts. That's when he struggles. He needs to hit the ground running in come July 24th and play like the MVP caliber player he is or their season isn't going to go as they plan.

Luis Robert needs to hit the ground running too:

He's gonna be a fucking STAR. Perennial 30/30 threat with ++ defense in CF in the meat of the order. The young core of Yoan, Eloy, Robert, and eventually Vaughn is going to be one of the top middle of the order's in baseball. That's a promise not from me to you, it's a promise from me to that pube faced fuck Marty Mush.

And the Schedule is playing the the White Sox benefit:

Obviously this is FAR from an exact science as teams get both better and worse over the offseason, but the White Sox schedule is a huge benefit to them. The Royals are bad, the Tigers are worse, and the Pirates are pathetic. 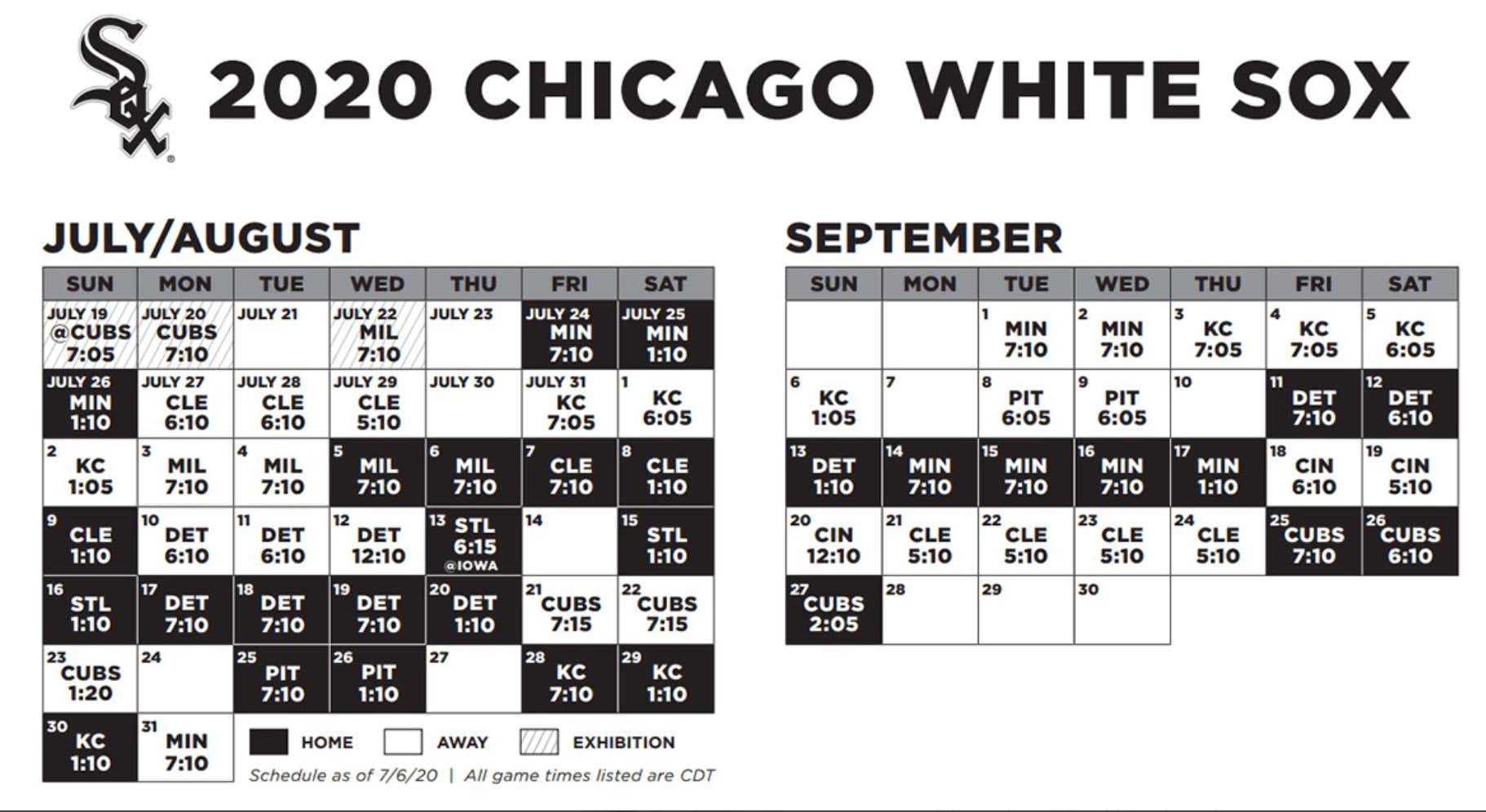 They HAVE to chew up and spit out those three teams as much as possible this year. Can't throw up any stinkers as every single game counts this year. No team in baseball is afforded time as a way to dig themselves out of a self inflicted hole this year.

And if they do, they are a playoff team:

This is the year that I've personally been waiting for for 5+ years now, but of course a global pandemic wiped out 2/3rds of the season because I can't have nice things. It's fucked and I hate it. But I saw a tweet a few weeks back that couldn't be more true; it said that NOBODY talks about the Hawks winning it all in 2013 after a strike wiped out half their season.

I'm not saying the White Sox are winning it all this year, that'd be dumb. But I will say they absolutely could make the playoffs and should they do that, they're a scary team. Their staff is deep, their lineup is young and dynamic and their team chemistry is fantastic. I'll say it again, nobody gives a shit about the White Sox but you better respect their roster. The players expect victory every single night and fans should too.

Now please god let us sneak this 60 game schedule in. My mental health depends on it.