Daily Mail - An Arizona woman has been dubbed a 'Karen' after she filmed herself destroying a rack of face masks inside a Target store claiming the pandemic is over and boasting that she had a $40,000 Rolex watch.

The video was uploaded on the Instagram account of Melissa Rein Lively, who runs a public relations company in Scottsdale, and was reposted on Twitter on Sunday.

'Finally we meet the end of the road. I’ve been looking forward to this s*** all my f***ing life,' she said as she films a rack selling various face masks inside a Target store.

She then proceeds to aggressively rip the masks from the shelves and fling them onto the floor.

Two Target employees then approach her as she makes her mess and say,' Ma’am can you please stop'.

A second video, filmed on Instagram Live on the profile of The Brand Consortium, the marketing brand Lively is the CEO of, shows cops arrest her at her home following the Target incident.

In the clip Lively claims she’s a spokesperson for QAnon and the White House.

'I was hired to be the QAnon spokesperson,' she said in the clip adding police can 'call Donald Trump and ask him' claiming she can’t share any 'classified information'.

This is one of those situations where, as you explore the depths of the rabbit hole, you're not sure where this woman's deep psychosis ends and her common, every day assholery begins. I mean, you don't have to have a PhD to watch either of these videos and recognize that there is something deeply wrong with this woman's brain. Mentally and emotionally, she is out there where the busses don't run. That's a fact, not opinion. But it's doesn't mean she's not an insufferable piece of shit, either.

And so while I'd love to allow for her obvious need for serious mental health treatment, I'm nevertheless going to come down on the side of her simply being a garden variety  asshole, for several reasons.

The first being that she's got a $40,000 rolex and she's shopping at Target. I shop there enough to know that I couldn't fit $40,000 worth of Target merchandise into one of their signature high quality red shopping carts. This crackpot is walking around with that much on her wrist. Unless it was ruined by the handcuffs, that is.

Another reason I can deduce that she simply sucks is the look on her husband's face when she's ranting at the poor cops who had the misfortune of being assigned to her case. Tell me this isn't the face of a man who's delighted his deranged wife is about to be led off to the Stoney Lonesome: 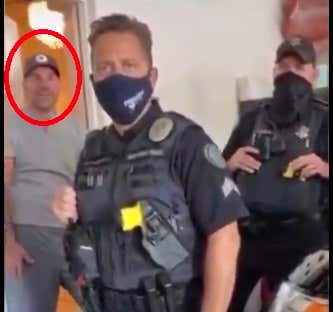 That's a guy who is looking forward to the first peaceful afternoon he's probably had in years and will be in no hurry to show up with the bail money.

Finally though, the more you dig around for more about Melissa Rein Lively, the more you come to realize she's just an insufferable, dead-eyed, plastic-faced, hysterical skank and a conspiracy theory nutjob you couldn't spend two minutes having a conversation with.

Not to mention she hands down has to be the marketing CEO in the history of the world, given that her meltdown toward a couple of employees at a superstore is the only thing her "brand" has ever been known for. I don't know how she's doing in the polls in that gubernatorial race, but my advice is she pose with the American flag more, and stop talking on camera altogether.