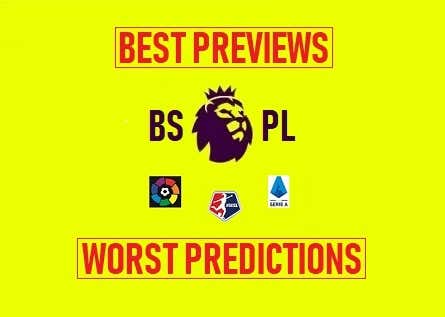 Bigggggggggg weekend ahead. Nothing better than sitting on the couch from daybreak Saturday to sundown Sunday watching the beautiful game. Do it for freedom. Do it for America. This is why we killed the Nazis. To do absolutely nothing but watch jogo bonito and forget about the rest of our life (and lose some moneys) – like soccer god intended. No further preamble necessary.

Let’s start with the scores from the past week: 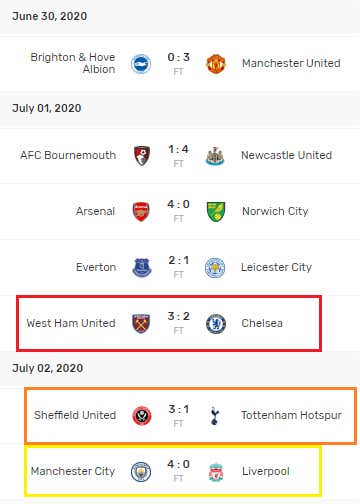 As for the table: 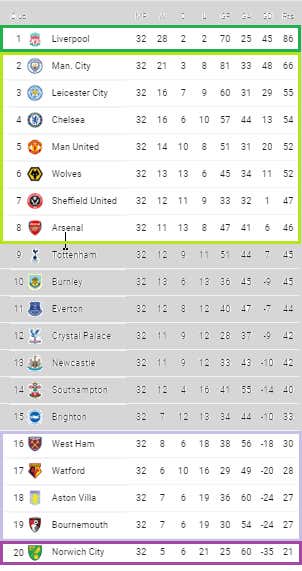 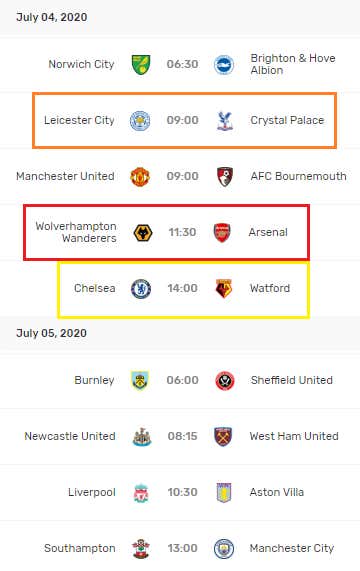 Do or die for Arsenal. Win this weekend and they are in/near the thick of the top 5 battle. Loss and they will join bum ass Tottenham on the outside looking in. 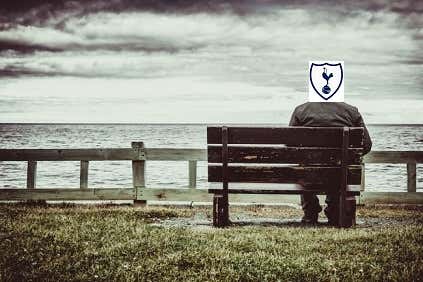 Talked about this at some length on this week’s podcast with Mikey and Larry Nance Jr but on paper this is a terrible matchup for Arsenal. Wolves are comfortable conceding possession and have the quick strike ability to hit opponents on the counter – especially those with a soft underbelly boasting David Luiz and Shkrotum Mustafi as starting CBs. Big time yikes for the Gunners, who have looked pretty decent of late… albeit aided by a handful of mysterious goalkeeper errors.

There is no reason to put much let alone any faith in Arsenal’s defense, but I’m doing it because a loss this weekend would be huge for Spurs. I’ve seen this move before. I know how it ends. With Arsenal falling backasswards into an unexpected dub.

Hoooo-WE, the bookies hate Palace in this one. Maybe that’s because they have lost two in a row (including a girthy pounding by Liverpool) and can’t ever score more than one goal a game. That said, nobody outside of the relegation pillow fight has been worse since the restart than Lester. I get it, they are a very good team that had been in incredible form almost all season… but they have flat out STUNK since coming back. James Maddison is out to lunch, Ben Chilwell has been busy dreaming of his near-term payday, Jamie Vardy is doing tiktoks with his reptilian wife, and so on. The team has just plain lost its mojo. You would think it is just a matter of time until they put it together. That’s what I thought would happen this past weekend – but nope. Same old stinky Foxes. So I’m cutting bait and saying they lay another egg.

I think there is a legitimate chance that Watford scrounges a point out of this game. They didn’t look great last game or for more than tiny stretches since getting back, but they have three highly motivated players returning to the lineup… talking about Andre Gray, Domingos Quina and Nathaniel Chalobah who were suspended last game after they all attended a birthday party for Gray that broke quarantine rules. Chelsea defense is suspect (as proven by West Ham this week) so it’s one of the moveable object vs stoppable force games. I want to be ballsy but think – especially coming off such a bad loss – Lampard will find a way to get his boys sufficiently up for it. Where there is a Babyjesus, there is a way.

Serie A: Juventus threatening to run away with things so Lazio’s trip to startlingly competent Milan on Saturday (2:45pm CT) is an absolute must-win to stay within shouting distance of the Old Lady

NWSL: really wish CBS would put more of these games on network TV, or at least their auxiliary sports-specific station, but whevs the games have been quite entertaining and got another big one on Sunday (11:30am CT) as Chicago Red Stars and NC Courage face off in a rematch of last season’s championship game. NCC has been the best team so far and CRS have yet to show they have a scoring replacement for Sam Kerr.

Another big weekend of sockuh to celebrate the greatest nation in the earth (even if there is work to be done). Thanks for stopping by. Back with another blog next week… the week that MLS finally gets back in action… maybe… definitely… possibly…