Well there we have it. Given the injury that Oladipo had and how he looked when he initially got back which wasn't exactly his All Star level, this isn't exactly shocking. Personally I was interested to see how he looked with the long hiatus, because make no mistake this a decision that has many layers.

First and foremost, the seeding in the East. It's been forever, let me remind you where things stand as of today 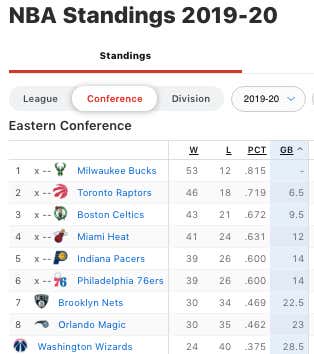 Things are still wide open outside of MIL. Thats especially true in the 4-6 seeds where everyone is within 2 games from each other. Heading into the final 8 games, the Heat have the second hardest schedule in the entire league. The Pacers have the 18th and Sixers 22nd. It would be incredibly shocking if at full health the Sixers aren't able to finish ahead of an Oladipo-less Pacers. That moves them into the MIA/MIL bracket if all other things stay the same. It also means we wouldn't get an IND/MIA series which would have been awesome since this whole ordeal happened

They also meet in the 8 game ramp up season so you know there will be bad blood. As you can see, Oladipo not being available could potentially help shift how the East is seeded and ultimately the ceiling of certain teams given their potential playoff path.

But that's just half the story. Remember, Oladipo and the Pacers aren't exactly seeing eye to eye when it comes to an extension

The Heat already said they are going after Giannis and Oladipo in the summer of 2021. Seeing as how next season is the last year of Oladipo's deal, if the Pacers aren't planning on extending him this summer they almost have to trade him right? But that's where it gets tricky. Who is going to trade for Oladipo while he's still a huge unknown? That's why the Orlando bubble would have been interesting. If he balled out maybe the Pacers offer him a better extension without hesitation. Or at the very least maybe they have an easier time of flipping him if they didn't want to keep him for themselves. Now they have to make a decision with more of an unknown. Who is to say if they allow Oladipo to get to UFA that he even entertains their offer? If they wait to trade him by the deadline next season their leverage goes out the window and he's a big time asset for them. It's your job to cash that in for as much of a return as you can get if you're going to rebuild.

So yeah, I'd say Oladipo not playing is a pretty big deal for a wide variety of reasons. At the end of the day though it just sucks because Oladipo is good as hell and the league is better when he's doing shit like this