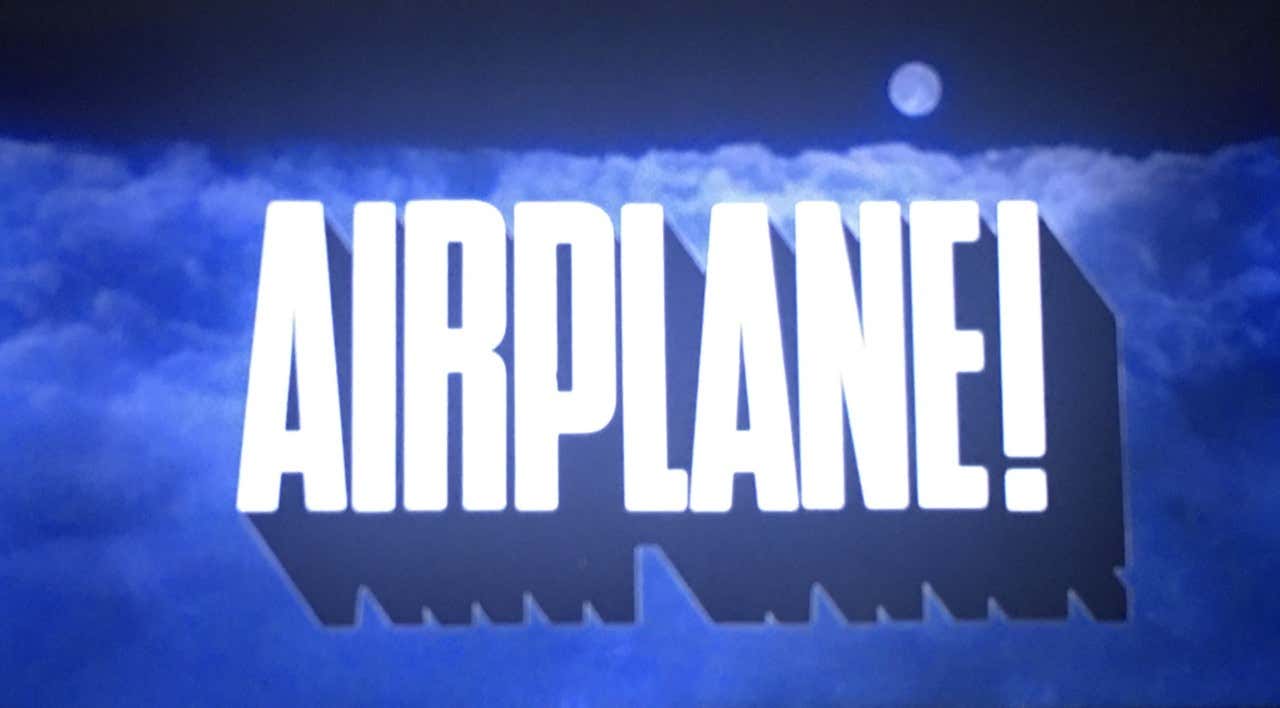 I know my man Jerry blogged AIRPLANE!'s 40th with a wake-up this morning. But it's one of the three funniest movies ever made so it more than deserves a second blog.

Movie release date anniversary Tweets have spawned a cottage industry of nostalgia blogs to mark the occasion and I am definitely here for them. If it happens be one of the many classics that my old man took me and my brother to see, like AIRPLANE!, then I'll shoot pops a text with a quote from the movie and we'll go back and forth for a bit and have a laugh. So as silly as marking a 35th for, say, THE GOONIES might seem, texting my father during Q'tine to reminisce about seeing it has been a nice little respite from the mayhem that is planet Earth right now.

Two years after ANIMAL HOUSE revolutionized American comedies, the Zucker-Abrahams-Zucker team came along and perfected the spoof genre with AIRPLANE!. After inadvertently recording the 1957 airplane drama ZERO HOUR! while searching for material, the comedy team bought the rights in order to parody the movie about a traumatized pilot who must take over as captain when the crew falls sick. After a decade of disaster films that got increasingly worse, the timing couldn't have been any better to goof on the genre. And ZAZ fucking nailed it.

Mentally-scarred war pilot-turned-taxi driver Ted Striker (Robert Hays), who got his crew killed during a mission, reluctantly boards an LA-to-CHI flight in hopes of reconciling with his long-time paramour Elaine (Julie Hagerty) who is a stewardess on the flight. After the airline meal gets the crew sick, Ted has to take over the cockpit despite not even looking at a plane since the war. What ensues is arguably the funniest 87 minutes ever put to film. I laughed my ass of when I saw it at 8 years old and I just laughed my ass off again 40 years later. Hays and Hagerty deserve full props for their feature film debuts because they're the glue of the movie and add an ironic gravitas to their scenes.

AIRPLANE! effortlessly, and sometimes slyly, drops sight gags, fourth wall breaking, slapstick, puns, and old jokes into new situations ("I gave at the office" from Joe Isuzu as a Hare Kirshna never gets old). But it also finds humor in dark places and makes light of what we now think of as taboo topics: suicide, addiction, PTSD, pedophilia, alcoholism. That's a tight comedy rope to walk with no net but the creators Wallenda'd it. I also find new things almost every time I watch it again, like realizing that Jimmie Walker is the guy fixing the windshield wipers and closing the airplane hood at the begining.

Maybe the biggest miracle AIRPLANE! pulled off was making Kareem seem like a cool guy with a fun personality. The spoofs of JAWS, SATURDAY NIGHT FEVER, and FROM HERE TO ETERNITY are all perfect. I still imitate Elaine and the stabbing victim every time I'm on the dance floor and "Stayin' Alive" comes on.

If you have need a bunch of laughs tonight, fire up AIRPLANE! on Netflix. You will not be disappointed.