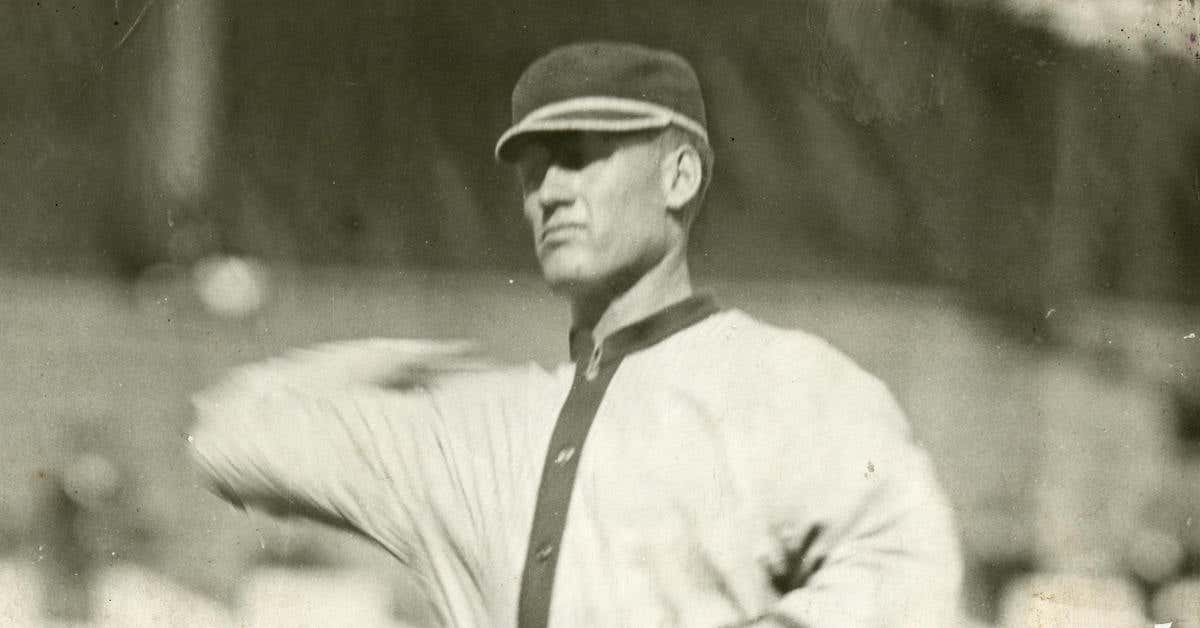 Walter Johnson of the Washington Senators tosses the only no-hitter of his illustrious career as Washington beats the Boston Red Sox 1-0 at Fenway Park. The Senators only run comes in the seventh inning courtesy of a two-out single by Bucky Harris. Johnson would finish his career with several records, including most career shutouts with 110. The only Red Sox baserunner is on an error by Harris in the seventh.

It could be argued that Walter Johnson is the greatest pitcher in the history of major league baseball. He was born on November 6, 1887, in Humbolt, Kansas. As a teenager, Johnson moved with his family to Orange County, California. After playing semipro baseball while working for the telephone company, Walter Johnson signed with the Washington Senators in 1907.

Walter Johnson showed great promise upon making his debut with the Senators as he posted an ERA of 1.65 in 14 games. In his first full season, Johnson posted an ERA of 1.88. Playing on bad teams in Washington hurt Walter Johnson early in his career. However, while baseball, when the dead-ball era, he emerged as the best pitcher of the 1910s. In 1913, Walter Johnson won the Chalmer’s Award a precursor to the MVP with a 1.14 ERA the best in the history of the American League, while posting a record of 36-7, the best of his career.

In a 21-year career, Walter Johnson amassed a major league record 110 shutouts. Many of which were won 10 due to the lack of run support he got playing for the Senators who more often than not finished in the lower half of the American League standings. Through 60 games, the Senators were 32-28 under manager Clark Griffith, while the Red Sox in their first season after selling Babe Ruth were scuffling at 30-31 for Ed Barrow.

Walter Johnson opposer Harry Harper on a Thursday afternoon at Fenway Park. The Big Train was firmly on track that day as he quickly went through the Red Sox lineup, striking out three of the first nine batters he faced. In the second trip through the Red Sox order, he was just as dominant with six strikeouts. In the seventh, the Senators' offense made some noise as Sam Rice led off the inning with a single. Braggo Roth followed by getting on base with a fielder’s choice. Roth later advanced to second on an errant pickoff throw.  Howie Shanks followed with a single, after a strikeout by Red Shannon, Bucky Harris came to the plate with two out and two runners on base. Harris singled in Roth as Shanks was thrown out trying to score a second run.

The Red Sox now trailing1-0 got their first base runner in the seventh on an error by Bucky Harris at second. However, Harry Hooper would not advance by first as Walter Johnson quickly set down the next three batters. Demonstrating his dominance, Johnson got three batters on infield popups in the eighth inning to inch closer to history. In the ninth inning, Walter Johnson struck out pinch hitters Benn Karr and Hack Eibel to bring his total to ten for the game. Harry Hooper was the final chance for a hit, and he grounded out Joe Judge, who tossed the ball to Walter Johnson covering at first to finish the No-Hitter.