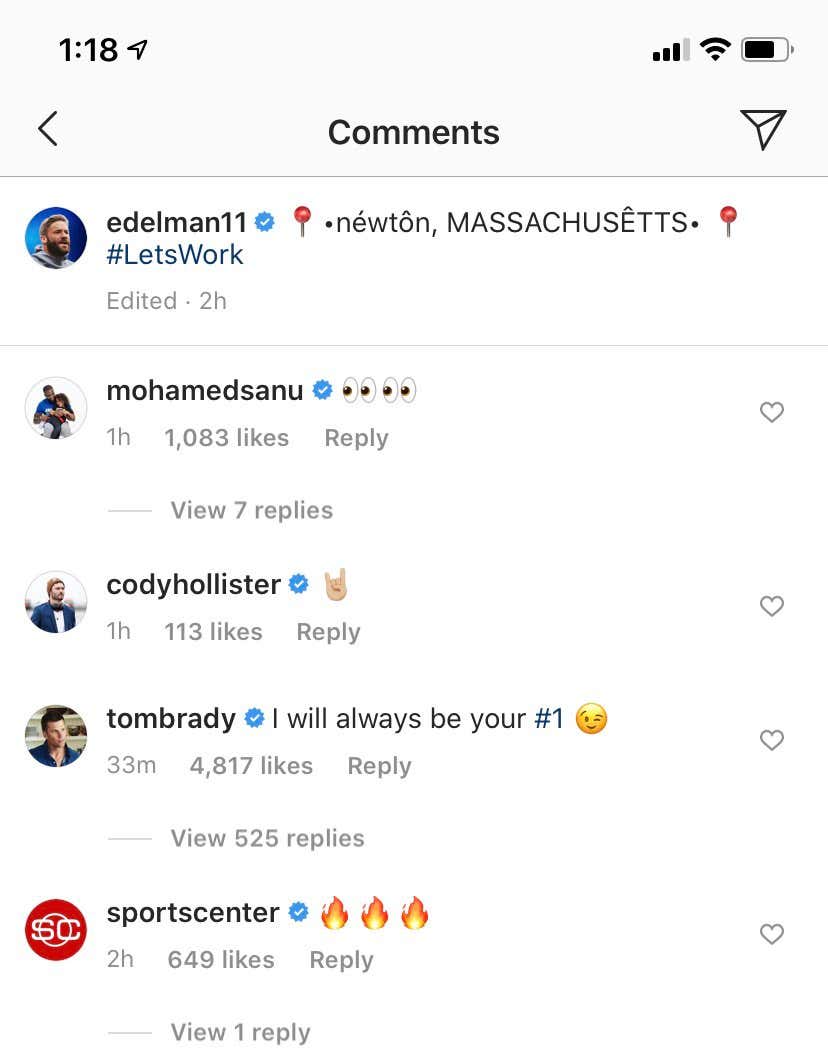 Remember how when Brady announced he was leaving New England, dumping an entire region on that dark Irish Christmas morning, the first thought we all had was about ourselves and how we'd get through it. Followed immediately by thinking about Julian Edelman and how he was going to cope.

Let's not forget it was he that sat with Brady courtside while Mike Vrabel was on the phone. It was he that posted the "Say Anything" boom box photo when it still appeared Brady hadn't made up his mind. Then when Brady signed with Tampa and Rob Gronkowski unretired and was traded there, it felt like it would be even harder on him than everyone else in New England combined. I just assumed for him, watching Brady and Gronk go reunite together under the palm trees would be like Destiny's Child breaking up just so Beyonce' and Kelly Rowland could form a duo and leave Michelle Williams to fend for herself. But would appear Edelman is the Beyonce'. Staying on top. Still fierce. Still ready to crank out the hit after hit.

He hasn't crumbled. He's not wallowing in loneliness and misery. He hasn't requested a trade to Tompa to put the band back together. Edelman is here to stay and he's got unfinished business. He's striving to be among a select group of Patriots players with four rings*. And if Cam Newton is the one who's going to be tasked with leading him to that goal, well then by God he's going to embrace him, strap on his helmet and get to work. Old loyalties and friendships be damned. He and Brady can be buds again after it's all over. But for now, there's work to be done.

It's just sad that Brady can't see it that way. Pathetic, really. Any time you see a once proud man who can't get over the fact that someone is over them, it's cringe-inducing to the point it could cause crippling spasms. I mean, "I will always be your #1"? How needy can you be? Show some dignity, man. Have some self respect. This is like Jon Favreau in "Swingers," leaving his ex all those stalkery phone messages.

Stop being a meme, fercrissakes.

Be better, Brady. Remember, you quit Edelman, he didn't quit you. If you want to be his #1, you have a terrible way of showing it. I prefer my slot receivers working with the guy who's here, not pining for the one who left. As CSNY put it, if you can't be with the one you love, love the one you're with.

Edelman and Newton. This could be the beginning of a beautiful friendship.

*(Mathew Slater, Devin McCourty, Pat Chung, Dont'a Hightower and James White would become the others. Plus obviously Brady's six. But you knew that.)