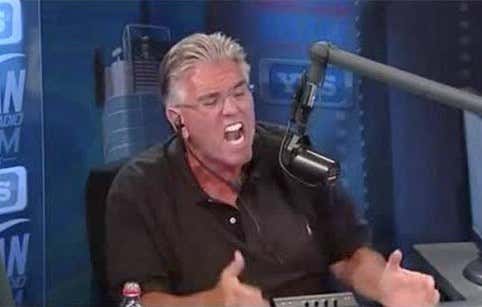 Even as I start to respond to this, I'm well aware of the futility of it. At this point in Mike Francesa's career, refuting his points is like visiting your grandpa at the home and trying to rationally explain through his dementia that he's not still fighting the North Koreans and the FBI isn't brainwashing him through the TV. The Sports Pope should like be left alone to entertain us with his name dropping and over-inflated sense of his accomplishments.

So I guess I'm arguing not specifically with him so much as his specific point. Because I have no doubt it's shared by millions. Tens of millions, even. Huge segments of the population who are convinced the Patriots continue to commit crimes while somehow managing to stay one step ahead of the grand jury and escape justice like 1990s Whitey Bulger.

It's entirely correct to say there are two systems of punishment in the NFL, one for New England and one for everybody else. The Francesas of the world just have it backwards. The Patriots aren't the beneficiary of a double standard, they're the victims.

Since 2001, the NFL has stripped 15 draft picks away from seven different teams. It's happened to the 49ers twice. New England is the only member of the Three Time Club.

And before we go any further, as you're saying "Well that's because they cheat the most," let's be sure and get our facts straight. Especially since nobody ever seems to want to do that. And it can't be said enough. In Week 1 of the 2007 season, their camera guy who was at the Jets game specifically to get film of the Jets sideline so Bill Belichick's staff could later go back and try to read their signals for future reference. That was perfectly legal. There is a designated area of the stadium set aside for that purpose. But the guy was outside that area. Those are the facts. That's the rule that was broken. And for that, the team that always gets off easy was stripped of a first round pick and fined $750,000.

Thus ends the list of actual rules breaking by the Patriots football operations. A camera in the area other than the one designated for cameras. I'm not leaving anything out. The rest of the bullshit people have swallowed like Cheetos is all just Alex Jones level nonsense. Taping the Rams Super Bowl walk through in 2002. Bugs planted in the visitors locker room. The video screen outside Gillette angled so they can see it from the home sideline. Spies in the hills up above the Seahawks Super Bowl practices. Helmet radio signals being jammed. The scoreboard showing the wrong down when John Harbaugh panicked at the end of the 2011 AFC championship game. Deflated footballs. It's all just been chasing ghosts.

But, including the actual rules violation they actually did commit, they've now lost:

And let's take care to remember those picks aren't just some abstraction. They all have true value. Either of those first could've been the next Vince Wilfork or the next Dont'a Hightower. That fourth could've been a James White or a Shaq Mason. And next year's third could've been the next Joe Thuney or Chase Winovich. Which is why the league should take them away only for the most egregious and obvious violations.

Plus they've been fined a total of $2.35 million Kraftbucks. Belichick was personally fined a half a million. And the best player in the history of the sport was suspended four games for not handing his personal phone over to a Commissioner who was on a personal crusade, running an investigation that was out to prove his guilt and leaking like a spaghetti strainer.

So don't talk to me about getting off easy. If you want an example of actual cheating with no consequences, look no further than Mike's own city. Like 2015 when the Jets were caught tampering with Darrelle Revis. Not my opinion. That's a fact, not disputed by any of the parties involved. In the past, teams have had to forfeit draft picks to the team that had the tampered player under contract. In 2011, the Lions were caught tampering with Chiefs safety Jarred Page. Not successfully, by the way. They failed to sign him. But as punishment, they had to send their seventh to Kansas City plus swap fifth rounders, which moved the Chiefs up significantly.

So what was the Jets' punishment for signing away the best defensive back in the division who had just won the Pats a Super Bowl? They were fined $100,000. Woody Johnson made that much money selling baby shampoo in the time it took you to read that sentence. In that case, the Patriots were the clear, undisputed victim. But they're the bad guys and so they got treated like they brought that shit on themselves and deserved to lose their star cornerback.

That is NFL justice. And so is New England getting whacked this hard over a film crew that has nothing whatsoever to do with the football side of things. Something that has never happened in the history of the league. "Continue to get off easy," my ass.